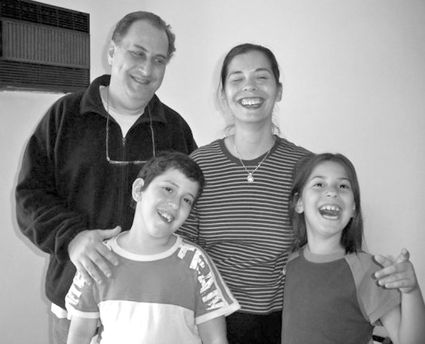 Formerly from Argentina, this family (l-r) Carlos, Daniel, Maria and Violeta, now live on a kibbutz in northern Israel.

Carlos and Maria and their two children wanted to emigrate to Israel from their home in Argentina, but financially it was an impossible dream. Argentina had suffered financial collapse in 2001, and even though the economy was slowly improving, inflation and anti-Semitism were still on the rise. The family was beginning to lose hope when the Jewish Agency introduced them to representatives of Ezra International. With financial aid, Ezra made it possible for Maria to get to Israel first while her husband Carlos and the two children remained behind. Within two months Maria had work, an apartment and had pre-enrolled her children in school. Then with continued support from Ezra International, a few months later the whole family was re-united. Today this family lives in a northern kibbutz near the Sea of Galilee.

This is just one of more than 40,000 stories of Jewish people wanting to make aliyah from their homelands-Siberia, Argentina, Ukraine, Azebaijan, Uzbehistan, Georgia, Moldova, to name a few-but need help. In all these instances, help came from Ezra International, an organization established in the 1990s with the simple purpose of locating Jewish people in remote parts of the world and helping them in any way possible to move to Israel.

At a dinner in Lake Mary in mid-January, founder and president of Ezra International, Mel Hoelzle, introduced this 20-year-old organization to the audience of Christians and Jews. Working with the Jewish Agency and the Israeli Consulate, this humanitarian-aide group has representatives in more than 15 countries. They give moral support to Jewish people in often anti-Semitic environments, and provide all the fees for passports, visas, documents and transportion to and from the consulate to make sure all the paperwork is in order, as well as air transportation to Israel and often settlement. The average cost to move a family, according to Hoelzle, is about $2,520.

"We rescue, return, restore. We give one-on-one support to families in the process of emigration," said Hoelzle. "We even pay off any owed debts."

Consul General of Israel to Florida and Puerto Rico Chaim Shacham sent a letter to the organization, recognizing the work Ezra International has done. In part it read: "I wish to congratulate you and the members of Ezra International for the work you do on behalf of world Jewry and the State of Israel. Through your 'fishermen' you have located and helped 'lost' populations of Jews in such far flung locations as the Crimea in the Ukraine and the Amazon jungle of Peru. Your organization has been able to get the proper documentation and provided funds for these Jews, many of whom had no contact with the organized Jewish community in their own country."

Included in the meeting was a talk from a young Israeli Defense Force reservist, Izzy Ezagui, who at the age of 19, lost his arm during his first battle at the Israeli-Gaza border. After more than a year of intense training, he was able to return to duty. In May 2011, Shimon Peres, president of Israel, awarded him the highest accolade a soldier outside the battlefield can receive. He now lives in New York, but returns to Israel once a year to serve in the military reserve in an elite Israeli unit.

Ezagui said Israeli soldiers give "115 percent to protect their land," and he wasn't even born in Israel. He grew up in Miami. When he was 13, his family took him to Israel for his bar mitzvah. At that time, a local laundromat on King George was blown up by a suicide bomber. Fifteen civilians were killed, including seven women and children, one of which was a newborn. His family left Israel. However, through Birthright, Ezagui returned when he was 18. Passing by that same area, he realized he wanted to stay and join the IDF.

Why is he involved with Ezra International? "They are bringing the rest of us home. We can protect them here."

For more information about Ezra International, visit their website at http://www.ezrainternational.org.