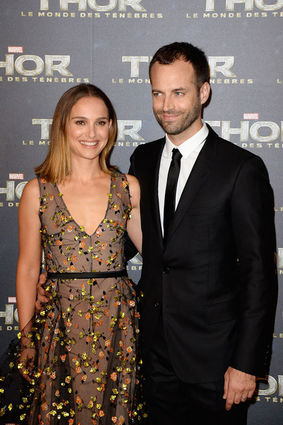 Natalie Portman and her husband, Benjamin Millepied, attend the premiere of 'Thor: The Dark World' on Oct. 23, 2013 in Paris.

HOLLYWOOD, Fla. (JTA)-We didn't think it was possible, but Natalie Portman has gone and inspired us yet again. This time, The Times of Israel reports, the actress, director and adorable mom has donated money and clothing to Syrian refugees via Operation Human Warmth.

The initiative is the result of several Israeli organizations-the youth group Hanoar Haoved Vehalomed, the social and education organization Dror-Israel, and Israeli Flying Aid, a global humanitarian organization-coming together to collect winter supplies for those displaced by the civil war in Syria.

Portman, who is in Israel working on her directorial debut, an adaptation of Amos Oz's novel "A Tale of Love and Darkness," learned of the project through Israeli friends.

"When I heard about Operation Human Warmth I felt deeply moved and compelled to get involved," she said in a statement. "In the middle of a brutal winter, these children have no shelter and their lives are in serious jeopardy from the cold. I am proud to take part in an operation where Israeli youth of all backgrounds are taking action to help out those whom need it most."

Portman is no stranger to the mitzvah thing. The Israeli-born do-gooder has served as an ambassador for the microfinance organization Finca, supported environmental causes, and encouraged teenage girls to pursue careers in science. Have we mentioned how much she inspires us?

Shalom Auslander: Philip Seymour Hoffman 'had the biggest, brokenest heart of anyone I have ever met'

Many who have worked with, or even just admired, the incredible talent that was Philip Seymour Hoffman have shared their memories of the actor, who died on Sunday of an apparent drug overdose at 46. Among them is Shalom Auslander, author and creator of the Showtime series "Happyish" in which Hoffman had a lead role.

"This planet is no damned place to have a heart, and Phil had the biggest, brokenest heart of anyone I have ever met," Auslander said, according to The Wrap. "He was a beautiful person in a hideous world. Great actor, too."

In "Happyish," Hoffman played Thom Payne, described by Showtime President David Nevins as "a successful but self-loathing creative director at a New York ad agency." The series co-stars Kathryn Hahn and Rhys Ifans. Only the pilot has been shot, and Hoffman's death has left the future of the project unknown.

David Schwimmer to star in ABC adaptation of Israeli comedy

In his first big TV role since his days as Ross on "Friends," David Schwimmer will star in ABC's "Irreversible," according to The Hollywood Reporter. The show is based on "Bilti Hafich," the No. 1 original comedy on Israeli broadcast TV.

Schwimmer, who is also producing the series, will play Andy, one half of an "eccentric, self-absorbed couple" that is great at leaving a trail of hijinks in their wake.

Here's the lowdown on Ross-sorry, Andy, from the Hollywood Reporter: He's "a writer with two books under his belt-one that did very well and one that was a complete failure. He now makes a living conducting writing workshops part-time at the university, and has had a hard time mustering up the energy/resources to write his next novel, especially since his baby girl was born. Andy is a pessimist and one prone to extremes. He's a classic spoiled only child with a tendency to complicate things and get into trouble-but he will always avoid conflict. He masks his low self-esteem with sarcasm, which often leads to blowing up emotionally charged situations."

Bar Refaeli gets cozy with Kellan Lutz of 'Twilight'

"They were cozying up in the VIP area at her table. He had his own table, but he sat with Bar. They looked pretty close," a witness said, in what sounds remarkably like every other anonymous account of a canoodling celeb couple ever published.

Also familiar: Lutz's look, which is definitely in the Leonardo DiCaprio family. Guess Refaeli has a type. Oh, and it turns out she does like her men strong and famous.

The Seth Rogen and Evan Goldberg-scripted animated feature "Sausage Party" has been cast, and it's shaping up to look a lot like "This is The End" (minus the apocalypse, plus a bunch of cartoon food).

According to The Wrap, Rogen, Michael Cera, James Franco, Jonah Hill and David Krumholtz are all reuniting for the raunchy comedy about a sausage, which after falling out of a shopping cart scrambles to make it back onto the shelves before a Fourth of July sale. Also lending their voices to the film are Kristen Wiig, Edward Norton and Nick Kroll.