Special U.S. envoy is an advocate for Holocaust survivors in poverty 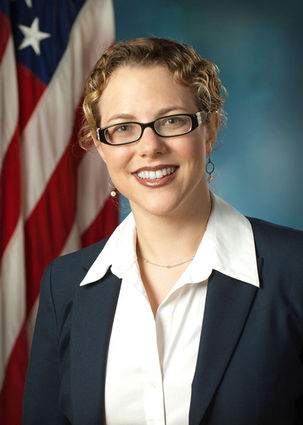 Department of Health and Human Services

Aviva Sufian was just 8 years old when her mother took her to an American Gathering of Jewish Holocaust Survivors event in Philadelphia in 1985. She remembers survivor after survivor standing up and announcing, "My name is..., and this is where I'm from."

Sufian, whose grandparents had come to this country shortly after World War I, says her parents "placed a primacy on my understanding the world they came from," including understanding the devastation of the Jewish people under the Nazi regime.

"I had a close relationship with Holocaust survivors in the community I grew up in," said Sufian, 37, who lived in Houston, studied Yiddish in high school and college, and as a student at Columbia University in New York conducted interviews with survivors for the Shoah Foundation.

Sufian's career has since focused on the elderly, both in the Jewish communal and government sectors. Named in late January as the first special envoy for U.S. Holocaust survivor services, she will be combining her background in the field of aging with her knowledge of Holocaust survivors.

"In many ways, I feel like stepping into this role is coming home to an issue very near and dear to my heart," Sufian said in an interview with JNS.org.

In her new role, Sufian will continue to work in the Administration for Community Living (ACL) at the Department of Health and Human Services (HHS), where since 2012 she has been director of regional operations helping to maximize the independence, well-being, and health of older adults, people with disabilities, and their families and caregivers. Her envoy role, the White House announced, will be as an advocate for survivors currently living in poverty, as well as those who may not be receiving services for which they are currently eligible.

About 120,000 Holocaust survivors live in the United States, with some 25 percent living in poverty, compared with 9 percent of the general elderly population, according to the White House.

Sufian's appointment is part of a White House initiative that Vice President Joe Biden had announced in December to help survivors. The initiative also includes a public-private partnership to raise awareness about and provide support for survivors. In general, the administration is looking for ways to "help people stay in their homes and communities and live in settings of their choice," Sufian said.

That objective is particularly important for Holocaust survivors who "have specific issues and needs based on their experiences-issues of social isolation, issues around institutionalization that harken back to their experiences during the war," said William Daroff, vice president for public policy at the Jewish Federations of North America, who praised Sufian's appointment.

"The White House imprimatur that comes with it will help to ensure that there's added focus and attention on this key population," he said.

Asked why Holocaust survivors should be singled out for special attention among all elderly individuals living in poverty, Daroff told JNS.org that it is "because they are Americans who are in need-just like it's the role of the federal government to help with your parents or my parents who have specific needs and who are in need of help."

Sufian said it will be her job to work across agencies-among them HHS, the Centers for Medicare and Medicaid Services, the Social Security Administration, Housing and Urban Development and the Department of Transportation-to help the agencies understand the needs of survivors and ensure that survivors know what's available to them.

"We want them to age well with comfort and dignity and the honor and respect they deserve," she said.

Some advocates for Holocaust survivors are pushing for state Medicaid waivers to use for home health care. Sufian is unsure of her involvement in that push. "I am in listening mode right now," she said. "I plan to identify barriers and service gaps and will work with my counterparts within HHS, across the federal government, and with cities and states to improve access to home and community based services."

"We believe that a serious assessment by this committee of the actual cost of needed in-home care and basic emergency services such as medicines, dental care, hearing aids, food, rent, utilities, transportation, and other vital services will show a multi-billion dollar deficit," he said, according to his prepared remarks for the hearing.

Rubin said survivors are not seeking funds from the U.S. government, but rather seeking the government's assistance in pressuring Germany and companies that had insured Holocaust victims before the war, yet have not paid off those policies, to take responsibility for survivors not just in the United States, but worldwide.

"The Holocaust survivors in this country strongly believe even at this very late date, we must return to the origins of Chancellor [Konrad] Adenauer's promise in the 1950s when he said that modern Germany must take care of the all of the needs of survivors due to the savage actions" of the Nazi regime, Rubin told the committee. "Survivors' mental and physical health care needs are more extensive, more complex, and more dire than other elderly people, and require serious, comprehensive responses," he said.

"I'm sure the vice president meant well" when he announced his initiative, but "it's not going to solve the problem," Rubin told JNS.org.

For her part, Sufian said such matters are in the purview of the State Department.

"I will be sharing what I learn about the needs of survivors with my colleagues at the State Department and with others in the federal government as appropriate," she said.