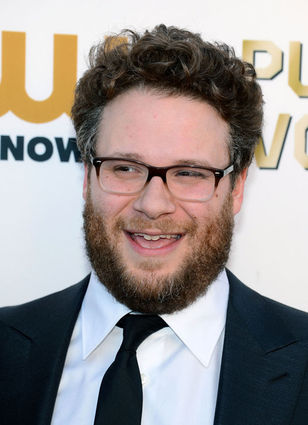 HOLLYWOOD, Fla. (JTA)-What are a couple of nice Jewish actors like Seth Rogen and Joseph Gordon-Levitt doing in a movie about Christmas?

We don't know, but after watching these guys together in "50/50," we're looking forward to finding out.

According to The Hollywood Reporter, Jonathan Levine, director of the 2011 cancer dramedy, is bringing its stars together again for the film that for the time is being called "Untitled Xmas Comedy." Rogen and Gordon-Levitt will play two-thirds of a childhood buddy trio (so many great possibilities for the yet-to-be cast No. 3 that we're dizzy over here) who go out together every year on Christmas Eve. This time it's in New York, where hopefully they'll hit one of those Matzo Ball bashes.

It's happening! The meetings between the Rolling Stones' people and the Israeli producer's people have resulted in a concert date for this summer, The Jerusalem Post reports. Israelis will be able to rock out with Mick Jagger, Keith Richards and Co. on June 10 at Ramat Gan Stadium.

The Stones were offered $4.5 million for the show, the largest amount ever offered to an artist to play Israel.

Other big names heading to the Holy Land this year include Neil Young, Justin Timberlake, the other Justin (Bieber, of course) and Lady Gaga.

To mark the landmark birthday this year of the classic children's book by Shel Silverstein-and to celebrate the late author's other four titles that came out in 1964-"The Giving Tree" will make its digital debut via HarperCollins, per The Hollywood Reporter. Silverstein had never even allowed paperback editions of his books.

"The Giving Tree" will now be accessible to a high-tech generation who may not be into picking up one of the print copies, of which there are more than 10 million. And more e-books means fewer trees reduced to (spoiler alert) nothing more than stumps for old guys to sit on.

The latest on the Woody Allen saga: The director-actor's son Moses Farrow has spoken out in defense of his father in the latest issue of People. Moses says he doesn't believe Allen molested his sister Dylan Farrow: "Of course Woody did not molest my sister," says Moses, who is estranged from Farrow and many of his siblings and is close to Allen and his wife, Soon-Yi, in People. "She loved him and looked forward to seeing him when he would visit. She never hid from him until our mother succeeded in creating the atmosphere of fear and hate towards him. The day in question, there were six or seven of us in the house. We were all in public rooms and no one, not my father or sister, was off in any private spaces. My mother was conveniently out shopping. I don't know if my sister really believes she was molested or is trying to please her mother. Pleasing my mother was very powerful motivation because to be on her wrong side was horrible."

Moses, a family therapist, goes on to accuse Mia Farrow of going into "unbridled rages" when angered and of frequently hitting him.

Dylan responded by sticking to her story and denying that her mother ever poisoned her against her father or resorted to corporal punishment.

"I will not see my family dragged down like this," she says. "I can't stay silent when my family needs me and I will not abandon them like Soon-Yi and Moses. My brother is dead to me. My mother is so brave and so courageous and taught me what it means to be strong and brave and tell the truth even in the face of these monstrous lies."

Dunham on Stern: He looks like a 'cartoon of a Jewish female horse'

Shock jock Howard Stern once said some not nice things on his radio show about Lena Dunham-specifically that Dunham is "a little fat girl who kind of looks like Jonah Hill" who was "raping his eyes."

It took a good year, but Dunham finally hit back. According to Page Six in the New York Post, the "Girls" creator took the stage at Stern's recent 60th birthday party and spoke her mind.

"He asked me if I was intimidated because my boyfriend could be getting a much hotter piece of ass," Dunham said after reminding the crowd of the Jonah Hill/raping lines. "At the time I didn't have the wherewithal to ask if you were intimidated because [your wife] Beth could definitely be with someone who doesn't look like a cartoon of a Jewish female horse."

Obviously it was all in good fun; Dunham was at the guy's birthday party, after all. Plus she closed with some kind words, including that Stern is a "champion for women in the arts."

What with all of this friendly banter, we can't help but imagine Stern, an admitted "Girls" fan, guest starring on the HBO series, possibly as Ray's dad. Just a thought, casting people.