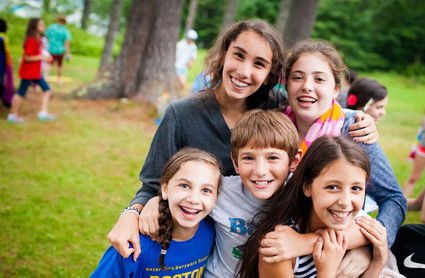 A new initiative is aiming to attract more first-time campers from middle- and lower-income households.

NEW YORK (JTA)-Think Expedia or Hotels.com or countless other vacation discount finders online, but instead to connect kids to Jewish camps.

The Foundation for Jewish Camp announced Monday that it is piloting a new program this summer offering first-time campers from middle- and lower-income families camp sessions at prices that are 40-80 percent below the camps' standard rates.

Called BunkConnect, the program, in partnership with the Center for Entrepreneurial Jewish Philanthropy, will make available 1,100 discounted slots at 35 camps in the Northeast, New England and Mid-Atlantic regions. While only families from those regions are eligible to participate this summer, the FJC hopes to expand the program to Jewish families and camps throughout North America in future years.

"This is an affordability initiative to help families who think camp might be out of reach," said Jeremy Fingerman, CEO of the Foundation for Jewish Camp. "It gives them a chance to find a camp that's right for them."

In recent years, Jewish overnight camps have gained considerable standing among Jewish communal leaders and philanthropists, who view them as one of the most powerful tools for Jewish education and identity-building. However, with tuition often exceeding $1,000 per week, they serve a disproportionately affluent clientele.

In many ways, BunkConnect is more incentive program than scholarship, a marketing tool to recruit families who may not otherwise consider Jewish overnight camp. Only children who have not previously attended the camp are eligible. If they return in future years, they will have to pay the full price or apply for financial aid.

Meanwhile, participating camps are offering discounted slots for sessions or cohorts that might not fill otherwise.

"Some camps are over capacity in the first sessions and might have available slots in the second session they're offering through BunkConnect," Fingerman explained. "This is modeled after the hospitality industry, but the difference is you're not just buying a hotel room, you're buying a whole experience."

Parents fill out an online questionnaire to determine their eligibility based on annual gross income, number of dependents, place of residence and if they have children enrolled in Jewish day school. The income ceiling is higher for day school families and those in pricier regions such as New York in order to account for higher household expenses.

Once deemed eligible -- a determination made instantly -- parents key in the child's age, gender and preferences. The website then displays options and urges parents to contact the camp directly for more information.

Before registration is finalized, families must submit tax forms to prove their eligibility.

While the Foundation for Jewish Camp said it could not disclose the names of the 35 camps participating in the program, a series of hypothetical online searches by JTA turned up discounted sessions at Camp JRF and B'nai B'rith Perlman Camp in Pennsylvania; Camp Louise, Camp Airy and Habonim Dror Camp Moshava in Maryland; Camp Avoda in Massachusetts; and JCC Camp Kingswood in Maine.

Discounts offered, which ranged from 40 to 80 percent off the list price, varied depending on the session date. For example, it was cheaper to attend Camp Airy in August than in July.

While the individual camps are absorbing any losses incurred by making slots available at a discount, many may come out ahead by filling beds that otherwise would have gone empty. In addition, after attending at the "introductory rate," campers may return the following summer at the full rate.

The Foundation for Jewish Camp is covering the costs of the BunkConnect technology and marketing.

BunkConnect is not the only effort to make Jewish camp more financially accessible, Fingerman said. The foundation also supports some scholarships such as the One Happy Camper program for first-time campers.

The foundation also has explored the possibility of helping launch lower-cost programs, Fingerman said, but "we're not sure the economic model of that is sustainable and attractive."