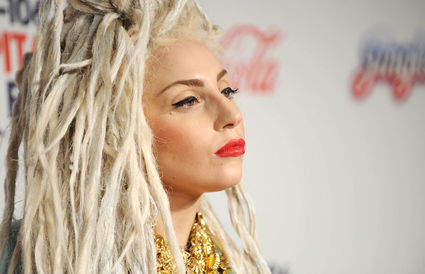 Other acts set to perform in the Holy Land over the next few months include the Rolling Stones, Neil Young, Justin Timberlake, Justin Bieber and the Pixies, among others.

Get busy Roger Waters-looks like you have some serious open letter writing ahead of you.

Lena Dunham on photos of boyfriend with ScarJo: 'My mind is going to explode'

Lena Dunham was trolling the Internet when she stumbled upon a shot of her boyfriend with his ex-girlfriend. Relatable, right? Well, yeah, except the boyfriend, rock guitarist Jack Antonoff, used to date Scarlett Johansson.

It seems Dunham was perusing a little obsession of hers, a Tumblr blog called "Old Loves," when she came across a photo of her beau (a Solomon Schechter alumnus) with the Sexiest Woman Alive and SodaStream spokeswoman.

"The craziest thing that ever happen to me, was like, Old Loves is my passion, I check it, like, once a week. It's how I kick back on a Friday night to see what Old Loves has done," the "Girls" creator told Grantland Channel, according to The Daily Mail.  "I saw my boyfriend and his girlfriend from high school. Scarlett Johansson."

The two, it turns out, were together for a year when they were both 17 and attending the Professional Children's School in New York City.

"She's beautiful, he's beautiful, but it was just so surreal to be looking through this blog that gives me so much pleasure and then there's my boyfriend," Dunham said. "And I was like, 'My mind is going to explode.' "

Good thing she's not the jealous type, but even if she were, Dunham has nothing to worry about. Johansson is engaged to French journalist Romain Dauriac.

James Franco has added yet another couple of lines to his epic resume. It seems the film actor, soap opera star, professor, muralist and selfie master is now also a New York Times contributor and defender of erratic celebrities-in this case actor Shia LeBeouf.

Is LeBeouf nuts? Maybe. But one thing's for sure, per Franco: The guy is artsy.

"...I know that this idea has pretentious or just plain ridiculous overtones-that his actions are intended as a piece of performance art, one in which a young man in a very public profession tries to reclaim his public persona," Franco says before listing other examples of actors who fought back against the industry's control over their images, like Marlon Brando, Joaquin Phoenix and, of course, James Franco.

"At times I have felt the need to dissociate myself from my work and public image," he writes. "In 2009, when I joined the soap opera 'General Hospital' at the same time as I was working on films that would receive Oscar nominations and other critical acclaim, my decision was in part an effort to jar expectations of what a film actor does and to undermine the tacit-or not so tacit-hierarchy of entertainment."

To Franco's credit, the "General Hospital" stint was a pretty awesome way to stand up to the hierarchy of entertainment. In fact, we wouldn't be surprised if LaBeouf pops up on midday TV sometime soon, too. Franco would surely be flattered. As he said himself, "I think Mr. LaBeouf's project, if it is a project, is a worthy one."

South Korea is the latest country to buy the Israeli drama "Prisoners of War," aka the original version of Showtime's hit program "Homeland." According to The Hollywood Reporter, the adaptation will focus on tensions between South Korea and North Korea.

Since coming out and hitting it big in Israel in 2011, Keshet International has sold "Prisoners of War" to foreign markets that include Russia, Turkey, Australia, Brazil and, of course, the United States.

It will be the first Asian adaptation but not the first Jewish-influenced production to tackle the subject of North Korea. Seth Rogen has already been there, done that.

In case a couple of hours of onscreen flooding-not to mention a tidal wave of marketing-for his upcoming film "Noah" isn't enough, director Darren Aronofsky has put together an art exhibition in conjunction with the biblical epic.

"Fountains of the Deep: Visions of Noah and the Flood," running March 7-29 in New York City, will include "never-before-seen works by more than 50 contemporary artists as well as comic book and street artists," Page Six of the New York Post reports.

"The story of Noah and the book of Genesis has inspired artists for thousands of years," Aronofsky told Page Six. "I wanted to see what other artists would do [with the subject matter]."

You can catch Aronofsky's vision, featuring Russell Crowe, Jennifer Connelly, Anthony Hopkins, Emma Watson and some elaborate special effects, when it opens in theaters on March 28.

The actors Adam Brody and Leighton Meester were married in a "super-secret" wedding, Us Weekly reports. The couple started dating a year ago and broke the news of their engagement in November.

Both are alumni of shows created by Josh Schwartz. Meester, 27, played Blair Waldorf on "Gossip Girl," while Brody, 34 and Jewish, starred as Seth Cohen on "The O.C." Seth is best known (to us) as the inventor of the holiday Chrismukkah.

Details of the private affair have yet to hit the Internet, but we have something even better for you: A faux wedding announcement from Gawker celebrating the union of Blair Waldorf and Seth Cohen. Congratutov, guys!

Jimmy Fallon's debut as host of "The Tonight Show" a few weeks ago marked the return of Joan Rivers to the show following a 25-year absence. Rivers was among the parade of stars who took the stage to settle a $100 debt.

Even more monumental: It was the 49th anniversary of her first "Tonight Show" appearance, on Feb. 17 1965.

"It's about time!" Rivers said in a statement of her return, per The Hollywood Reporter. "I've been sitting in a taxi outside NBC with the meter running since 1987."

Rivers was banned from the show by Johnny Carson after leaving her gig as his permanent guest host to helm Fox's "The Late Show with Joan Rivers," a competitor.

"Being in the studio brought back the most wonderful, wonderful memories of the night that jump-started my career," she said. "So when people ask me, 'Why was last night different from all other nights?' I'll tell them that it certainly beats Passover!"