Chabad at UCF shines with Shabbat 613 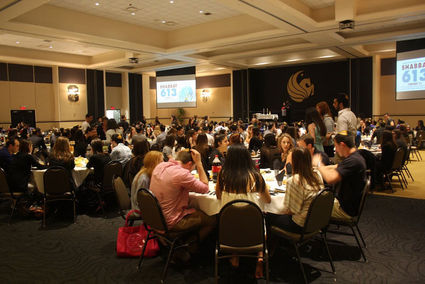 What would happen if more than 600 Jewish college students came together for an enormous gathering? On Feb. 21, Chabad at the University of Central Florida reached this accomplishment when their premier event, "Shabbat 613," took place in the Pegasus Grand Ballroom of the Student Union.

Just a year after completing a similar annual affair, "Shabbat 500," Chabad at UCF's Rabbi Chaim Lipskier and his wife, Rivkie Lipskier, wanted to increase their goal of attendees to 613. In this case, each person who showed up would represent one of the 613 commandments in the Torah.

"The idea started at the State University of New York (SUNY) Binghamton in 1994; it's an amazing concept. We get about 150 to 200 people in attendance every Friday, so we wanted to bring together as many Jews as possible for one big Shabbat," said Rivkie Lipskier.

"There was a lot of enthusiasm," added Rabbi Lipskier, "the room was charged with energy. The smiles on people's faces, and the sparkles in their eyes showed that they were very excited to be there."

The rabbi and Rivkie were not the only ones who were impressed by the turn out of Shabbat 613; the students in attendance were blown away, as well. There were hundreds of Jews from all different backgrounds that joined together for this massive celebration. The event was co-sponsored by all Jewish organizations at UCF including Alpha Epsilon Phi sorority, Zeta Beta Tau fraternity, Knights for Israel and Hillel. The Student Government Association gave funding for this event and many senators were in attendance.

In addition to the hundreds of students from UCF, Valencia, Seminole, Rollins, Barry, and Full Sail, Shabbat 613 had quite a few faculty in attendance. Dr. Michael Preston, director of Office of Student involvement; Dr. Terri Susan Fine, Stenzler faculty advisor for the Chabad Jewish Student Group and political science professor; Dr. Moshe Pelli, director of Judaic Studies and the Abe and Tess Weiss Endowed Professor; and Rabbi Meir Levinger, director of the Mayanot Women's Institute of Jewish Learning in Jerusalem all shared a few words. In addition Dr. Abraham Pizam, dean of the Rosen College of Hospitality Management, and Dr. Jay Hoffman, professor and chair of sports and exercise science, with his wife, Yaffa Hoffman, were in attendance.

"It's amazing to see over 600 members of such a diverse community on campus," said Jonathan Cannon, a senior at UCF double majoring in political science and psychology. "UCF has such a strong Jewish community that I am proud to be a part of. I hope it continues to grow and flourish with UCF."

Shabbat 613 was made possible by the efforts of many students. Though the rabbi and Rivkie directed the event, the Chabad Jewish Student Executive and General Board of Chabad at UCF played a major role in promoting the affair, recruiting their friends and colleagues to attend, and preparing the ballroom for that night. The president of Chabad Jewish Student Group, Alexa Freeman, was very pleased with the outcome of everyone's hard work.

"Shabbat 613 was an incredible experience," said Freeman. "To be surrounded by that many Jews for a Friday night dinner was a unique experience that I and many other students will never forget. Before we put together this event, we kept asking ourselves, 'Will we get 613?' Sure enough, the Jewish student body at UCF pulled together to make this event a success."

Shabbat 613 was a tremendous success as a result of those who coordinated, and attended it. According to Rabbi Lipskier, many people who attended gave him excellent feedback on their experience. "Since Shabbat 613 ended, people have reached out to us through Facebook, text messages, and phone calls saying what an amazing time they had, and how excited they are for the next one, hopefully, as the years grow (the event) will be larger and larger in numbers as every year builds enthusiasm. Last year was Shabbat 500, this year we had Shabbat 613, next year we are aiming for Shabbat 1000!"

For more information about Chabad at UCF please visit their website http://www.JewishUCF.com.