By Gidon Ben-zvi
The Algemeiner 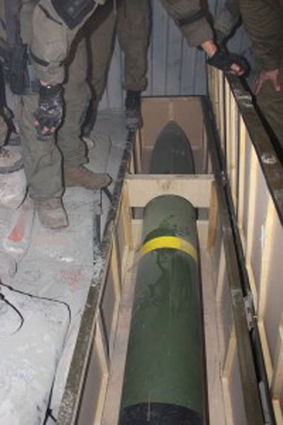 A missile found on board the ship.

Israeli naval commandos intercepted an Iranian ship in the Red Sea weighed down with missiles that was en route to the Gaza Strip, the IDF said in a statement.

The boat, named KLOSC, was stopped by the elite naval commando unit Shayetet 13 as it was heading to Sudan, 1,500 miles from Israel.

Once on board the KLOSC Israeli soldiers found cement bags, behind which were hidden dozens of M-302 missiles, which, the IDF said, were loaded onto the boat in Iran. Had the boat reached the Port of Sudan, its next stop would have been the Gaza Strip. The M-302 missile is made in Syria and is based on Iranian technology, Israel's Walla reported. M-302 missiles have a range of up to 200 kilometers and were used during the Second Lebanon War in 2006 to bomb several Israeli cities, including Haifa.

IDF Chief of Staff, Lieutenant General Benny Gantz, oversaw the operation and gave the order to Major General Ram Rothberg, head of the Israeli navy, to seize the KLOSC, the IDF said.

According to a senior Israeli military official, the commandos encountered no resistance from the crew of the KLOSC, Walla said.

The IDF said the success of the mission was "due to the combination of in-depth intelligence and enhanced operational capabilities."

"Iran was behind the shipment," said Brigadier General Moti Almoz, spokesman for the Israeli Navy, at a special press conference that was held last Wednesday, Ma'ariv reported. IDF Spokesman, Lt. Col. Peter Lerner, said, "The IDF will continue to operate against the Iranian attempts to arm regional terrorist organizations, who intend to continuously ignite our borders. We will continue to employ all the necessary means in order to prevent the armament of terrorist organizations and will combat the Iranian smuggling attempts that threaten the security and sovereignty of the State of Israel."

The Navy is currently in the process of towing the KLOSC to Israel's southern port in Eilat and it is estimated that the voyage to Israel will take several days, Walla said.

The KLOSC is the fourth ship destined for Gaza to be intercepted by Israeli forces in recent years.