A decade of 'good words' and a baseball odyssey 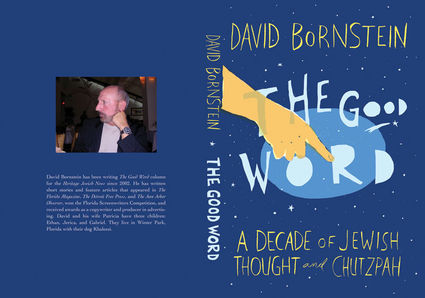 The Jewish community's own David Bornstein will read from his newly released books, "The Good Word: A Decade of Jewish Thought and Chutzpah" and "Me and E: A Baseball Odyssey," at Congregation Ohev Shalom on Thursday, April 3 at 7 p.m.

Bornstein is a cornerstone name in the Central Florida Jewish community. David grew up in a household and among an extended family of well-known leaders and builders of this community. The Jewish Federation's leadership program is named in honor of his father, Jerome J. Bornstein. His mother, Rita, was a dynamic force in the community-not to mention his aunts and uncles who were practically household names in the Jewish and greater Orlando community.

But how many people really know David Bornstein? He became active in the leadership aspects of the Jewish community-even becoming president of the Jewish Federation in 2000-through "manipulation" (his words) by his father. "I slowly, grudgingly, became more and more involved in our uniquely struggling, vibrant community..." he says in the Introduction to his book "The Good Word: A Decade of Jewish Thought and Chutzpah." And so begins the journey of getting to know a bit about David Bornstein-and ourselves.

Released last August, this book is a compilation of his favorite colums published in the Heritage Florida Jewish News from 2002 to 2013. Through these articles, one gets a glimpse of Bornstein's passions, regrets, conflicts and joys in his life. His articles are more than entertaining, they are thought provoking, insightful, and often turn the reader's inner eye on his/her own thoughts and memories.

One amazon,com review says of the book, "These editorials began as explorations into community building and tikkun olam-changing the world positively-but grew into inquisitive, sometimes humorous, occasionally curmudgeonly conversations about what it means to be a Jew and a human being... This collection of essays is a snapshot of a time, a window open to a world of slightly offbeat possibilities..."

Writing is not something new to Bornstein. He has written several short stories and feature articles for several national magazines and newspapers. He won the Florida Screenwriter's Competition in 1990 for a drama "The Littlest Greyhound," and has received numerous awards as a copywriter and producer in advertising. 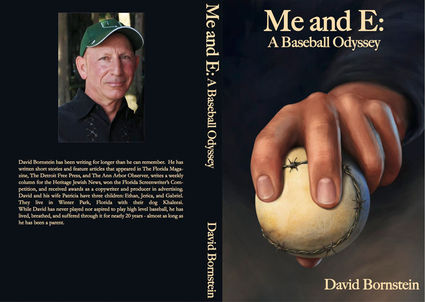 His more recent publication, "Me and E: A Baseball Odyssey," is a project close to his heart. Bornstein loves (and hates) baseball. This is the story of raising a son (the 'E' stands for Ethan) who has a gift for playing the game. As his bio on the back of the book states: "While David has never played nor aspired to play high level baseball, he has lived, breathed, and suffered through it for nearly 20 years..." It is an honest look at himself as a dugout dad; the barbs and thrills of the game-fanatical coaches, hypocrisy in high school athletics, the college recruiting process; and the yin and yang of being there for your child and letting go.

The reading event is free and open to the public. He will have books available for purchase and signing. A portion of the sales will go to COS to support Jewish education. His books are also available on amazon.com.