Infusing meaning into the Passover seder 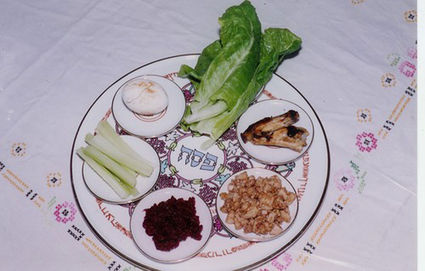 The traditional Passover seder plate. Noam Zion suggests a second seder plate, plate filled with objects brought by invitees that represent the most important thing that has shaped their Jewishness, in order to get everyone more involved in the seder.

As the intersection of family, Jewish memory, and the passions of contemporary politics and society, the Passover seder is said to be the most celebrated annual Jewish event in the United States. But it is not always easy to make all seder attendees feel the Haggadah's mandate that in every generation, each individual should feel personally redeemed from Egypt.

The seder's uniqueness is what makes running a successful seder so challenging, suggests Noam Zion, research fellow at the Shalom Hartman Institute and coauthor of two haggadot. It is at the same time a very intellectual venture, modeled on the Greek symposium, and a reflection of the priestly service, with ceremonial foods eaten in the proper order at the right time. Yet the leader of any seder is the head of the household where that particular seder is being held, and that leader may or may not be an expert.

"You need imagination, emotion, drama [to lead a seder]; you need someone who has gone to drama school, studied in a rabbinical yeshiva, and knows the rabbinic laws and how to run a priestly seder, and you have to do that with people of all different ages and different attitudes," says Zion. "It's almost a 'mission impossible' to balance all those elements."

Zion says his father, Rabbi Moses Sachs, imparted two lessons about running seders: the importance of meshing the traditional and contemporary, and the need for sensitivity to a seder's particular audience. Rabbi Arthur Waskow-director of the Philadelphia-based Shalom Center, whose stated mission is "to reunify political action and spiritual search"-remembers serious, leftwing seders with parents who were socialists and union activists. Although he still participated in seders after leaving home, his central identity was as a civil rights and anti-war activist.

Then Waskow experienced a sequence of events around the seder that changed his life. In 1968, when Washington, DC, was under martial law in the wake of the riots following Martin Luther King, Jr.'s death, walking home from the office to get ready for the seder meant walking past the Army, Waskow recalls.

"There was a jeep with a machine gun pointing up my block," he says. "My kishkes (insides), not my brain, began saying, 'This is Pharaoh's army; and you're going home to do the seder.'"

"For the first time in my life, the seder was not just serious; it was explosive," Waskow adds. "It was like discovering a volcano in your backyard that had not only been dormant, but that you did not know existed."

Later that year, disheartened by the murder of U.S. Sen. Robert Kennedy and the events surrounding the 1968 Democratic National Convention, Waskow turned again to the seder. "I felt driven to sit down with the haggadah given to me when I was 13, with graphics by Saul Raskin, in one hand, and in the other King, Thoreau, Emanuel Ringelbloom (the diarist of the Warsaw Ghetto uprising), the black slave rebellions of the 1830s and '40s, Gandhi, John Brown... I made them into an argument among themselves; I constructed an argument about violence and nonviolence and that became the heart of 'The Freedom Seder' (a haggadah Waskow published in 1970)," he says.

For Rabbi Barbara Penzner of Temple Hillel B'nai Torah in West Roxbury, Mass., seders have changed at different stages in her life. The seders her family shared with another family were "very homey, comforting, and welcoming," with each father leading to his strength, one more traditional and her own more socially active.

After Penzner met her husband, Brian Rosman, things changed. "We wanted more discussion and less connection to the literal reading of the haggadah," she says. The couple, therefore, started to ask each invitee to take charge of one part of the seder. "It was a potluck meal and a potluck seder; because we didn't have kids, we would be arguing well into the night," she says.

Things changed again when Penzner had children. "Once you have kids, you can't argue on the same adult level, and you can't count on them sitting at the table for a long period of time," she says. "At each stage as our kids grew, we adapted our seder."

According to Noam Zion, the seder ritual went astray when it "became a public reading of a sacred text."

In fact, Zion is fine with skipping the haggadah's long midrash (homiletic stories meant to resolve problems in the interpretation of difficult biblical passages) that begins with "My father was an Aramean." He claims that it is not a necessary read, but rather "a model of the kind of rabbinic discussion you yourself were supposed to have" at the seder.

From their experience running seders over the years, Zion, Waskow, and Penzner offer a number of suggestions for molding a successful seder night:

Pick the best guests you can, because you need allies who share your goal of having an interesting seder, says Zion. He notes that family members who don't want to be there can be a big drag. Inviting curious Christians, he says, can spice things up with new questions and put "deadbeat relatives" on their best behavior.

Always assign roles to at least three or four people before the seder. "Pick the people who are not the most knowledgeable but the most energetic, dramatic, opinionated," says Zion. A politically interested person might talk about contemporary struggles for freedom, a storyteller might perform paper-bag dramatics, an artist might discuss artistic renditions of the four children, and a good cook might bring lots of hors d'oeuvres to put out at the beginning of the seder, so that there are no complaints about hunger.

Don't have the same person planning the seder and serving the meal, says Penzner. It's worth paying someone to help out.

Plan the timing of the seder well, Penzner says. Know when you want to end, and get to the meal in time for that. If you want to include the post-meal parts of the haggadah, you need to stop the meal early enough so that people don't leave.

Encourage questioning. The ritual "four questions" are just a model. For little children, suggests Penzner, hang matzot from the ceiling with crepe paper, or shape sticky Sephardic haroset into pyramids. Penzner also likes to give out chocolate chips to anyone who asks a good question. 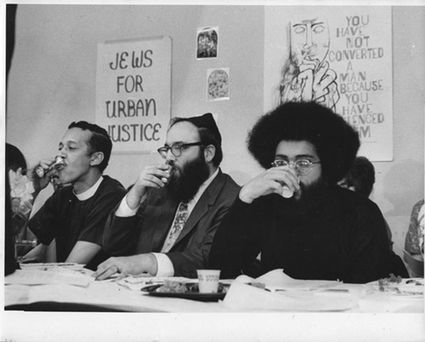 Make sure the seder reflects the participants: If you are bringing young children to a seder that is adult focused, Zion suggests, you should ask the host for a 10-15 minute slot to do something meaningful for the children. With small children, you may want to move the first part of the seder from the table to couches and the floor. "That gave us and families with babies room to go in and out and participate as much as they could," says Penzner.

Include activities that get everyone involved, like creating a second seder plate. Zion suggests one plate filled with objects brought by invitees that represent the most important thing that has shaped their Jewishness. Waskow shares the suggestion of Martha Hausman to have a "freedom plate" where "people bring some physical object from their own lives that represents freedom for them, and each person gets to lift his or her own object and explain it." Zion also recommends filling Elijah's cup together-via the Ropshitzer Rebbe, he explains that as each participant pours in a little wine, they can share their hopes and dreams for "next year in Jerusalem" and for a better world.