Not your average spring break 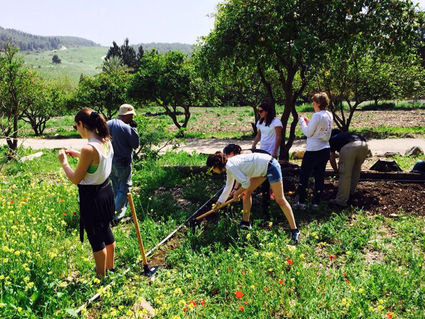 Rebecca Fischer and her JNF Alternate Spring Break group weed and plant a garden in Northern Israel during her 'alternate' trip to Israel.

While all of my friends were spending their last spring breaks of college on cruises or going to the beach, I chose a different path. Through the Jewish National Fund, I signed up for Alternative Spring Break, which is a week-long trip to Israel where college students from around the country engage in community service projects in various parts of Israel.

I was excited to be placed in a group working in Northern Israel since I didn't get a lot of time there in high school. From day one, I was in a group willing to go the extra mile. We started out painting the main floor of an apartment building that was in a co-op in the local city for low-income housing. By being put in a project quickly, we all got a chance to bond over being able to help the residents who didn't have the money or the resources to do it themselves. A few residents even came down to tell us how happy they were to have people paying attention to their building. Sometimes you do projects for the sake of doing the project without human contact that you never truly see the impact of the work.

As a Floridian, I enjoy a nice day outside. A few of our projects were gardening days to help build a community garden for growing herbs and vegetables, clearing weeds on pathways, and cutting down fire brush to help prevent future fires. The most fun part was the fact that you would get so into pulling weeds, raking, picking up branches, and emptying plots that it felt like you had only been working for five minutes when it had actually been five hours. Our team was so into working that by the time we stopped for lunch, we had gotten twice as much done as expected.

There were times for education and inspiration as well. While tending to one of the gardens at Lotem, a handicapped accessible nature park, we met a man named Roz. He had suffered a life-altering spinal injury at a young age, but loved nature and was excited that there was a wheelchair-accessible hiking trail for him. It was hard not to listen to his story, especially once he said he couldn't wait to race in the handicapped race of the Jerusalem marathon with JNF as his sponsor.

I had never realized how global JNF was until we tried to see Roz race at the marathon. I had always thought it was the U.S. and Israel with JNF but the marathon ended up having a team represented by JNF from the United Kingdom. With the thousands of people at the marathon, you could see the unity of the state of Israel by one simple sport-running. There were Arab-Israelis, Orthodox-Israelis, secular, and people from other countries running to support Israel.

For more inspiration, our group found ourselves at a youth village for refugees from around the world. It is for high school students only, but if their families manage to leave the country also, they are allowed to live in the village as well. It is an Orthodox Jewish village, even if those who come to Israel are not actually Jewish. Many of the refugees are from Ethiopia, Darfur, France, and parts of Asia where they are escaping from political problems, religious persecution, and general poverty. The students go through the typical high school education and then are given the option to leave the village to pursue college, move, or simply stay in the village and help new arrivals.

It was incredible to see how some of these kids even walked from their own countries to Israel to create a better life for themselves. Similar to how people left Europe in the 20th century and came to the U.S. through Ellis Island, there is so much that goes into their stories that you cannot help but sympathize and then feel proud for these children who are trying to make a better life for themselves and their families.

I couldn't have asked for a better spring break experience. I graduate college at the end of April and enter the corporate world. I didn't think I would get a chance to go back to Israel for at least a year so I took the opportunity to go. It is never a bad idea to take a step back from your own life to help others. To all college students-start your journey to Alternative Spring Break today! You won't be sorry you went.