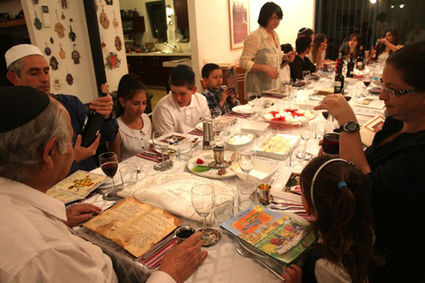 A family seen during the Passover seder on the first night of the holiday in Tzur Hadassah, Israel, on March 25, 2013. Diaspora Jews observe two seders each year, as opposed to one seder per year in Israel.

Rather than feeling a sense of loss, leaving the second Passover seder behind in the U.S., or France, or Turkey, or any other country of origin is touted as a perk of living in Israel that new immigrants to the Jewish state (olim) mention in the same breath as the universal availability of fresh pita and falafel.

But why do Diaspora Jews mutter to themselves while they're dragging out the matzo balls for their return engagement at seder No. 2? Why, since the Torah is crystal clear that Passover is to last seven days, do Diaspora Jews have to tack on the eighth day, and the second seder? And why don't Israelis need to do that?

For the answer, one has to look up-to the moon-because the Jewish calendar is a lunar affair. In the old days, witnesses needed to testify that they saw the new moon, thereby fixing the date that each month began (since the months could be either 29 or 30 days long). Consequently, without that expert testimony, those far removed from Jerusalem would not be informed when the month began-hence the timing of the holidays in the Diaspora. Since there is a day on each side of possible error, the ancient Jewish sages wisely tacked on an extra day to the festivals, as one of the first two days was bound to be right. In Israel, of course, no such precaution was necessary. Thanks to those witnesses, they knew the right day.

Although communications are vastly improved since the days of the Sanhedrin (the Jewish supreme court in Jerusalem), the custom in Diaspora communities of celebrating an extra day of Passover, and other festivals such as Sukkot, has remained in force. (Note: Rosh Hashanah is the one exception, as the Jewish New Year is celebrated everywhere for two days).

The 30 years since Gary ("Gary the Guide") Kamen made aliyah from Chicago have, if only in this one respect, been nothing short of bliss. "Did I miss the second seder? Not for an instant," grins Kamen, whom JNS.org caught up with outside Jaffa Gate in Jerusalem's Old City, where he was rounding up his tour group. Growing up with divorced parents, it was always the first seder with Dad and his family and the second seder with Mom and hers. Or vice versa. Now it's one seder for family and friends alike, and then a dive directly into chol hamoed-the intermediate days of the holiday. Here in Israel, that's a full five days (not four as in the Diaspora), during a time of year when olive blossoms burst into bloom and the air and lakes warm up appreciably.

"You know what a mechayah ("pleasure" in Yiddish) is? That first Pesach here was a mechayah!" added Kamen's fellow tour guide Allan Younger, in a distinctly Scottish brogue. Even 20-plus years later, the memories are still fresh.

"I can remember what it was like for the first time not having to start all over again and drag out the leftovers like we had to back in Scotland," he adds. "The truth is, day-old tsimmis (an Ashkenazi stew made from carrots, dried fruit, vegetables, and meat) does not taste good."

Baila Brown says she too will never forget her first seder as an Israeli citizen. She had made aliyah from Massachusetts and had just moved into her new apartment in Jerusalem. Waiting for her son to return so they could begin their seder, she stood in her courtyard listening to the children in the adjoining apartments singing the Four Questions. "It was such an amazing sound. I knew at that moment that I had arrived," she says.

As for the second seder, Brown says that, as much as she was accustomed to it in the States, "It's as if we don't need it here... the one we do have is such a powerful telling of the story right here in the part of the world where it all happened." And as those neighborhood children chanting the four questions illustrated, the seder "is a communal and shared experience here in a way it can't be there," she explains.

"And here you can really experience Passover as a spring holiday, something you don't feel in New England where it's still cold at that time of the year," Brown says.

New York native and coauthor of "Doublelife - One Family, Two Faiths and a Journey of Hope," Harold Berman also remembers the first Passover after he and his family arrived in Efrat five years ago. "The word that kept coming to mind was 'natural,'" he recalls. "It seemed so natural to tell the story just once. Once you have experienced it, it stays with you. After all, in America, we never had Thanksgiving dinner two nights in row."

By the way, visitors to Israel, unless they own property there, still need to keep the second day of the holiday even when the Israelis around them are throwing the bathing suits into the car and heading off for their vacations. Yes, that means the visitors need to hold a second seder, complete with seder plate, four cups of wine, and the reading of the Haggadah with as much respect and focus as the night before.

Maybe, after singing "Chad Gadya" and draining the fourth cup of wine at that second seder, these visitors will want to amend the traditional seder-ending promise of "Next year in Jerusalem" by adding "...this time as an Israeli citizen."