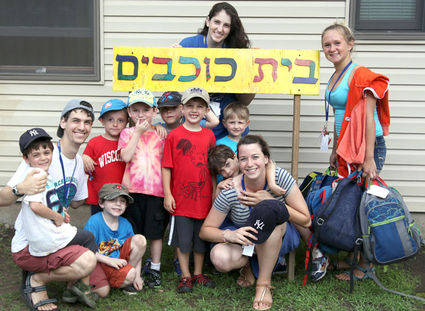 Participants in a new Hebrew immersion program at Camp Ramah in Nyack.

NEW YORK (JTA)-A key component that unifies a people or nation is a common language. The Jewish people are no exception; the Hebrew language is an essential element of what constitutes the Jewish nation.

Hebrew often is the only common language in the room – the lingua franca – when Jews from different parts of the globe get together (native English-speaking Jews aside, for the most part). Conversely, the lack of a unifying language creates a great gulf between people. It leads to misunderstandings and frustrations on both sides, and ultimately lessens the fraternal bond.

So for the sake of the Jewish future, the American Jewish community needs to reclaim Hebrew.

Indeed, many Jews are averse to learning Hebrew. They are turned off when they hear it spoken or see it written in the public domain because they see it as elitist and exclusionary. This could simply be a result of not being accustomed to seeing a second language in public. Yet many societies around the world are bilingual, even trilingual.

The issue of Hebrew in the American Jewish orbit may cut to a far deeper question: If one's Americanness is paramount to an American, and speaking English is the "American thing to do," then is promoting another language, by definition, un-American? By promoting Hebrew, does the Jewish community run the risk of undermining all it has done to achieve its place in general society, or is the American Jewish community finally secure enough to freely embrace its own heritage?

For those who are scared of Hebrew or its elevated status outside of Israel, they need not fear; Hebrew is not going to replace English as the everyday language of the Jewish community in North America anytime soon. It could, however, be the bulwark against assimilation.

A common misconception is that Hebrew is simply the Zionist language, i.e. the State of Israel's language. In protest of Israel's policies vis-a-vis the Palestinians, Alice Walker, an American writer, refuses to translate her Pulitzer Prize-winning book "The Color Purple" into Hebrew. Walker's is not an isolated case, as the Scottish author Iain Banks and the Swedish author Henning Mankell have similarly refused to allow their books to be translated into Hebrew.

Their hypocrisy and bigotry aside, one point does come through: The writers see Hebrew as the language of the State of Israel, not of the Jewish people. This view, unfortunately, is common around the world, including within the American Jewish community, where Hebrew is no longer defined as the Jewish language but is considered to be the Zionist language.

But Hebrew is not a Zionist language. It is the Jewish language, the language of the Jewish Bible, also known as the Hebrew Bible, and the only language that has any formal standing in Judaism. It also predates modern Zionism by about 3,500 years. Zionists, and by extension the State of Israel, rightly chose to use Hebrew as their language precisely because it is the Jewish language. The causality flows from Judaism to Zionism, not the other way.

So how do we go about promoting Hebrew? Many will be relieved to learn that it doesn't simply translate into mandatory, universal ulpan. It means appropriately encouraging Hebrew in a variety of formal and informal settings, supporting Hebrew literature, film and the like, and generally taking pride in the unique place Hebrew should hold within all of our communal institutions, synagogues and schools. And yes, speaking Hebrew would help.

The time has come for a serious discussion of the place Hebrew should occupy in the Jewish world and, if we believe in the future of the Jewish people, how we can best leverage Hebrew as a common and unifying force. Bringing Hebrew to the Jews of North America will be no small task, but nothing compared to the miraculous revival of Hebrew itself.

Ari Rudolph is a planning executive for UJA-Federation's Commission on the Jewish People.