Jacob Birnbaum was the unsung father of Soviet Jewry freedom 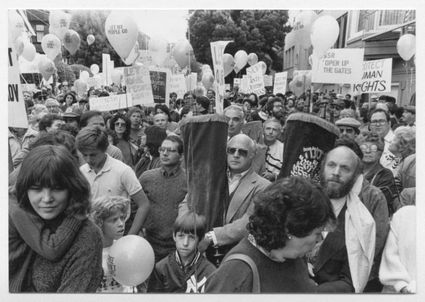 A rally for Soviet Jewry on Simchat Torah in 1983.

NEW YORK (JTA)-May 1 will mark the 50th anniversary of the first Student Struggle for Soviet Jewry (SSSJ) demonstration on behalf of Soviet Jews. The man who inspired the demonstration and became the father of the movement, Jacob (Yaakov) Birnbaum, died April 9 at the age of 87.

Birnbaum founded the SSSJ and, together with others including Glenn Richter, developed the first national grassroots Soviet Jewry organization. But Birnbaum's legacy was much greater than any organizational affiliation. He was a heroic, legendary figure.

In certain ways, his life paralleled the biblical story of Jacob, about whom the Passover Haggadah declares "arami oved avi," "my father was a wandering Aramean."

Jacob Birnbaum was a wanderer, too. Born in Germany, his family escaped to England when he was a young boy. After World War II he became involved in resettling the remnants of Eastern European Jewry. Having seen firsthand the horrors of the Shoah, Birnbaum resolved to do all he could to save Soviet Jewry.

So in the early 1960s, after coming to New York, he roamed-from room to room in Yeshiva University dormitories and in the halls of Columbia University-searching for students who would join him in a campaign to free the millions of Jews trapped behind the Iron Curtain. He was unyielding, uncompromising, relentless, stubborn, steadfast and tenacious, persevering no matter the obstacles.

After wandering for years, the biblical Jacob had proclaimed, "I crossed the Jordan with my staff, and now I'm accompanied by two large camps."

This, too, was the story of Jacob Birnbaum. He had little when he arrived on these shores. But with his departure from this world, one could proclaim loudly and clearly that the camps he accompanied were large, numbering well over a million Soviet Jews. American Jews are part of his camp, too, as Birnbaum inspired us in the West to stand up for our brethren in the East, and identify ourselves proudly and clearly as Jews.

Birnbaum was the first to sound the alarm in America, having been inspired by his grandfather, Nathan Birnbaum, who is known to have coined the term "Zionism." Jacob Birnbaum was the first to insist that we must cry out collectively to save Soviet Jewry; the first to lead the masses onto the streets in front of Soviet missions and embassies around the world; the first to understand the spiritual power of the movement and incorporate it with religious slogans and songs.

Indeed, Birnbaum was the first to recognize that not only did we have a responsibility to direct our protests against the Soviet Union, but we also had the obligation to insist that our own U.S. government do more, much more, to press the Soviets to let our people go.

Sadly, Birnbaum often would be peremptorily cut off by establishment figures who understood far less than he about the issue at hand. They eventually co-opted many of his original ideas but accorded him virtually no credit for his pioneering work.

In the early '60s, Birnbaum asked Rabbi Shlomo Carlebach to compose a Soviet Jewry theme song. The words go back to the biblical narrative, when Joseph, after 22 years of separation from his father, Jacob, asks his brothers "ha'od avi chai?" – "Is my father still alive?"

And today, the Jews from the Soviet Union and their descendants can declare, yes, Jacob Birnbaum, our father, the father of the Soviet Jewry movement, lives on. On his shoulders we, his sons and daughters from the former Soviet Union and from the free world sing out as one, "Am Yisrael Chai," "the people of Israel live."

Rabbi Avi Weiss, senior rabbi at the Hebrew Institute of Riverdale-The Bayit, served as national chairman of the Student Struggle for Soviet Jewry from 1983 to 1991. His memoir on the Soviet Jewry movement, "Open Up the Iron Door," is scheduled for publication this summer.