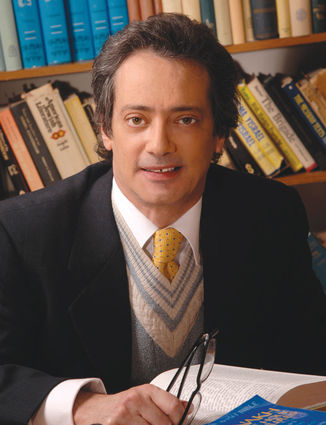 Anti-Semitism is alive and well...

Sad to acknowledge, but we must keep our eyes open to such hate and we must always remember the slogan, "Never Again."

FRAZIER GLENN CROSS (also known as Glenn Miller), doesn't want us to remember it, believe me. He's the hater that shot and killed three innocent people, thinking they were Jewish, on the eve of Passover. While doing the dirty deed, he shouted anti-Semitic slogans, including "Heil Hitler!" The three unfortunate souls he murdered happened not to be Jewish, but nonetheless, this crime has been classified as a "Hate Crime" by the FBI and rightly so.

Retired doctor William Lewis Corporon, a 69-year-old grandfather, who was proudly accompanying his grandson, 14-year-old Reat Griffin Underwood, to a singing competition at the Overland Park, Kansas JCC, was shot dead in the JCC parking lot together with his beloved grandson, who likewise perished.

The "monster" Glenn Miller also killed a 53-year-old lady, Terri LaManno, as she visited a resident at Village Shalom, Jewish assisted-living facility nearby.

Glenn is 73 years old, a former leader of the defunct North Carolina-based White Patriot Party (formerly known as the Carolina Knights of the Ku Klux Klan). Convicted of criminal charges related to weapons and violation of an injunction against paramilitary activity, he has often been a candidate for public office. He is an advocate of white nationalism, white separatism, neo-paganism and a proponent of anti-Semitic conspiracy theories..

Anti-Semitism is also thriving in Europe...

This report comes directly from the World Jewish Congress Digest:

"Stemming the tide of right-wing fringe party growth in Europe was one of the major items on the agenda of the National Jewish Community directors meeting recently in Brussels. Jewish leaders and representatives from the European Union and the American section of the WJC brainstormed ideas to confront issues of concern to Jews on the continent.

Sponsored by the WJC affiliate, European Jewish Congress, the strategy meeting took on issues of bolstering eroding Jewish rights, combating anti-Semitism and strengthening Israel's position in Europe. From far-flung communities in Latvia to major Jewish strongholds such as the United Kingdom, national Jewish community leaders wrestled with policy goals to protect Jews in Europe, where hot-spots of anti-Jewish sentiment and actions have erupted over the past few years. These have included issues such as restrictions on Jews in some countries considering laws to prevent ritual circumcision (I mentioned this in last week's column) and slaughter (koshering) of animals."

A most meaningful event...

I refer to the second Seder held at Congregation Ohev Shalom. It was led by Rabbi AARON RUBINGER and catered by Amira and her staff. Although I've been to many seders in my long (don't ask how long) life, I found this one to be truly entertaining. Rabbi Rubinger read most of the Haggadah but did call on volunteers to read often also. Most enjoyable were the voices of youngsters... so clear and sweet.

All the traditional foods were served, which Rabbi Rubinger explained to us, and the presence of so many old and dear friends made it a very special occasion indeed.

And speaking of meaningful seders...

I received this email from NANCY LUDIN, executive director of the Jewish Pavilion:

"The ten commandments teach us to honor your mother and father. Rarely do you see CAROL STEIN without her beloved mother, BETTY. She takes her out to meals, movies, shows and musical performances. Over the years, they have traveled together to many exotic and not-so exotic places. Betty Stein lives at Spring Hills, Hunters Creek, which is serviced by the Jewish Pavilion. They celebrated Passover in style last week. Prior to her mother's residence, Carol and her husband, LEE , have entertained at Spring Hills. Now, she (Carol) entertains there more often. While everyone in the world loves to hear Carol play the piano and sing, no one enjoys her performances more than Betty Stein."

(I could have told you that!)

Speaking of the musical talents of Carol Stein, I am reminded of a very special event happening in just a few days: On Sunday, April 27, starting at 12:30 p.m., talented pianist, MICHAEL KRAMER; his son, bassist, BEN KRAMER; drummer, GREG PARNELL; trumpet and cornet player, DAVY JONES; and guitarist, JAKE JONES, will be appearing at the Altamonte Chapel, 825 East S.R. 436 in Altamonte Springs.

Our own ALAN ROCK will emcee and professional musicians and vocalists are always welcome to "sit-in" second set.

Music and food (nothing better in the world)... 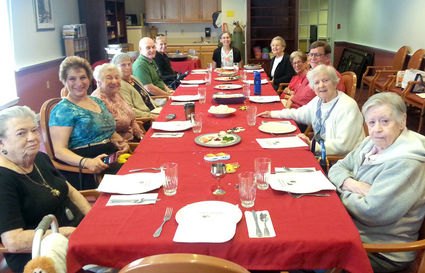 (Yep, you guessed it! My spouse and I ate out again!) I usually don't like to eat fish (unless it's gefilte fish, of course) but Long John Silvers is an exception. While in the SR 436 restaurant, Fern Park, recently (before Passover, of course) we were given the very best service by a wonderful gal named KRYSTALEE TOSADO. She did all she could to make sure we were happy and content... which isn't easy when your customers (me and Irv) are married almost 54 years! But she did it! (I hope Irving doesn't read this column.)

My little bit of sick humor (above) reminded me of this joke:

An excited woman called her husband at work.

"I won the lottery," she exclaimed! "Pack your clothes!"

"Great!" he replied. "Should I pack summer or winter clothes?"