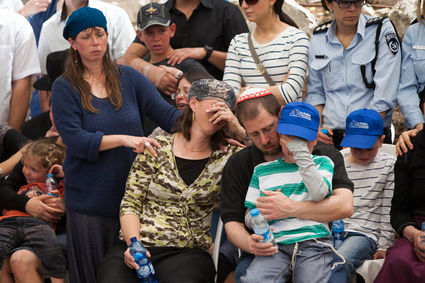 The family of Baruch Mizrahi, a senior Israeli police officer, mourns during his funeral at the military cemetery of Mount Herzl in Jerusalem on April 16, 2014. Mizrahi was shot by Palestinians on April 14 near the West Bank city of Hebron while driving with his wife and young son, who were also injured in the attack, as they were on their way to a Passover seder.

(The Algemeiner)-A 40-year-old Israeli man was killed and his pregnant wife was wounded on Monday in a shooting attack near Hebron, Israeli daily Yediot Ahronot reported.

The couple were driving near the Kafr Idhna junction on Route 35 with three young children when a Palestinian Arab terrorist opened fire on vehicles on the road. The father was critically wounded and attempts were made to resuscitate him before he succumbed to his injuries.

A child travelling in a different car was lightly injured in the attack, according to Israeli media reports.

According to a source cited by Reuters, the family was headed to see relatives for the traditional "seder" meal on the eve of the Jewish holiday of Passover.

Israeli security forces launched a search of the area in the wake of the attack, according to the report.

An initial Israel Defense Forces investigation found that the shooter approached the road on foot, and fired with an automatic weapon at passing cars from several meters away, Yediot reported. He then moved to another location, where he continued firing until he fled.

Palestinian Arab terror groups praised the murder, but as of yet, none have claimed responsibility.

Hamas called the attack "heroic" while Islamic Jihad said it was "a natural reaction" to Israeli "crimes."