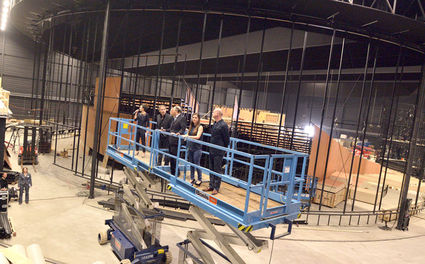 Cast and production crew examine the still unfinished Amsterdam theater that is being built as a venue for the play "ANNE" on March 12, 2014.

AMSTERDAM (JTA)-To millions worldwide, she is a symbol of heroism and a haunting reminder of the dangers of discrimination.

But for one Dutch entertainment firm, Anne Frank is a brand name powerful enough to merit millions of dollars of investment.

Last week, the Amsterdam-based production company Imagine Nation announced plans to open a huge theater in Amsterdam that will feature only one show: a new play, "ANNE," about the life of the young Jewish diarist.

The first production based on the full Frank family archive, the show will expose audiences to lesser-known elements of the Anne Frank story, such as the family's ordeals in German concentration camps.

But the commercial nature of the venture-the theater will include fancy interiors and a restaurant, among other amenities-also is exposing the Swiss organization that houses the archive, the Anne Frank Fonds, to criticism from its rival Anne Frank House in Amsterdam, a renowned museum that receives more than 1 million visitors annually.

"Anne Frank should not be a nice evening out," Anne Frank House director Ronald Leopold told JTA. "We are not involved with this whole thing, and I'm quite glad about it when I see all of this."

Leopold is referring to what he calls "the commercial setting in which this production is steeped."

"I can't help but frown when I see arrangements with a glass of wine, a box of snacks, dinner with a nice view and then a night out," he said, adding, "If it were [up to] me, then it would never have come to that."

Yves Kugelmann, a board member of the Anne Frank Fonds, celebrates the production for bringing Anne Frank's story to new audiences. Any money the Swiss group earns through royalties from ticket sales, he said, would be used for charity and education.

"It's like saying that selling her diary is commercialization," Kugelmann said. "It's not. Publishing books costs money and any proceeds [our] foundation makes from book sales go to charity and education."

Anne Frank was 16 when she, her sister and her parents were arrested after more than two years of hiding in a secret annex on Prinsengracht 263, now home to the Anne Frank House, which is also known as the Anne Frank Museum. Only Anne's father, Otto Frank, survived the Holocaust, and he edited Anne's diaries into a book, which was later adapted into a play and film.

Otto Frank also established the Anne Frank Fonds in Basel as the sole owner of the copyrights to the diary and tens of thousands of other documents. Frank, who also sat for a number of years on the board of the Anne Frank House in Amsterdam, stipulated that any royalties earned by the Swiss organization should go to charity and education.

The two organizations have long had a contentious relationship. Though Leopold says the Anne Frank House would never associate with commercial initiatives, it was accused two decades ago by Anne Frank Fonds of commercializing Anne after balloons and T-shirts were sold at traveling exhibitions of the Dutch group's artifacts. The Anne Frank House said local organizers were responsible for the sales.

The fight was the first of several clashes between the organizations, which once shared exhibits and collaborated extensively. Last year, a Dutch court ordered the Amsterdam museum to return a cache of 25,000 documents lent by the Swiss organization. Both sides accused each other of blocking a more amicable resolution to the conflict.

For decades, the Anne Frank House has thrived as the leading authority in its field in Amsterdam and the Netherlands. Leopold says he believes the new theater, housed in a three-story building less than two miles from the museum, will actually drive more traffic to the Anne Frank House, which he says offers a more authentic portal into the Frank story.

"You go to see 'ANNE' in a place which had had nothing to do with Anne Frank," Leopold said. "It's backdrop, a show with actors, and it is a radically different experience than historical immersion in the place where it happened, where the diary was."

Kugelmann says he doesn't see the theater as competition for the museum. The decision to locate the theater in Amsterdam was made because the city is so central to the story.

Leon de Winter, the best-selling Dutch Jewish novelist who wrote the script for "ANNE" with his wife, Jessica Durlacher, calls the conflicts between the two groups an unwelcome distraction.

"I didn't and still don't care about this conflict," de Winter said. "I only cared about materials which I have been privileged to access, but which filled me with uncontrollable anger at what has been done to a family of Jews and a writer who, at the age of 15, already had the talent, experience and clarity of a full-fledged author."

The play is being produced by Imagine Nation founders Kees Abrahams and Robin de Levita, a Tony Award-winning Broadway producer who worked on hits such as "Chicago" and "Les Miserables."

Audiences will arrive at the 1,100-seat theater by special ferry from Amsterdam's Central Station. Tickets will cost between $50 and $100.

"It's important that people feel at home, that they have a good time," Abrahams told journalists at a sneak preview last week of the still-unfinished theater. "So we made a large, lounge-like restaurant with 150 seats."

Abrahams sings the praises of the caterer, Dennis Borrel, whom he describes as "crazily creative," and vows that his theater will have enough bathrooms that spectators won't have to "line up like cattle" to relieve themselves.

"This theater has 16 toilet stalls for women-three times the required amount," Abrahams said. "I think it's crucial."

Anne Frank was 15 when she died, she never reached the age of 16.