Teens in grades six through 12 participate in Orlando J-Serve 2014.

On Sunday, April 6, nearly 90 Jewish teenagers arrived to the Roth Jewish Community Center in Maitland to participate in a day of community service called J-Serve, an International Day of Jewish Youth Service. Since 2005, J-Serve has been a part of Youth Service America's Global Youth Service Day weekend.

Orlando's J-Serve, titled "The Ripple Effect" was one of over 100 international projects in which sixth- through 12th-grade teens explored Jewish values of gemilut chasidim, acts of loving kindness, tzedakah, just and charitable giving, and tikun olam, the responsibility to repair the world. Across the globe, teens annually join together for J-Serve to make their community and the world a better place. J-Serve 2014 was in partnership with Repair The World, Youth Service America, and Rock the Vote, and is generously underwritten by the Charles and Lynn Schusterman Family Foundation.

In the greater Orlando area, teenagers were led by a J-Serve Teen Task Force that planned and facilitated the entire day. The Task Force greeted all of the participants, signed them in, and led games while everyone was arriving. The program formally began with the teens being divided into groups where the Task Force led discussion questions in order to frame the day. Teens discussed why they were there, why community service is Jewish, and how the idea of helping just one person can have a ripple effect on a larger community and the greater world.

"This year's J-serve event was so meaningful because we worked so hard on it starting in August and seeing everything work out and the kids come and have fun was just amazing to see," said Jonah Goldberg, Task Force leader and 10th grader at Lake Mary Preparatory School. "I was so happy I was able to be involved in the planning of this."

For service, the teens led a carnival for children from underprivileged backgrounds. The Task Force and adult staff reached out to agencies such as Devereux, Hope Helps, Inc, Community Based Care of Central Florida, Hungerford Elementary School, Jewish Family Service, New Hope for Kids, Seminole County Families in Transition, and Children's Homes Society. These agencies and organizations helped spread the word through their listservs, newsletters, and meetings.

The children that attended got to play on inflatable rides, carnival games, and enjoy popcorn and sno cones. "I liked ending in discussion groups at the end of the day because it allowed us to share our ideas and experiences from the day with one another, and it helped me realize that what we are doing is affecting more than just the community," said Tamara Zishuk, high school senior. "Our actions are a ripple effect that are of global importance, and the ending discussions really emphasized that." 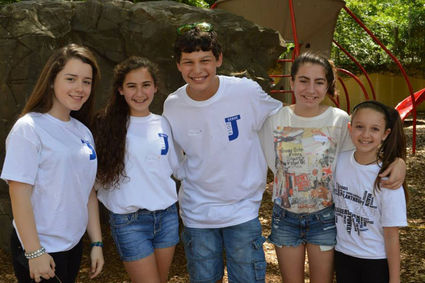 To wrap-up the program, the Task Force led small group discussions in order to help everyone process the experience they just had. Then, to conclude the event, JCC Youth & Camp Director, Abby Paulson, brought all of the teens together as one group for the teens to share about their experience, the connection to Judaism, and the potential of a ripple effect of community service occurring after J-Serve was over.

To apply for the 2015 J-Serve Teen Task Force, please contact Robby Etzkin at robbye@orlandojcc.org. The application will be ready during the first week of August. J-Serve in 2015 will occur on Sunday, April 19, 2015.

The staff members were Lory Conte and Robby Etzkin.