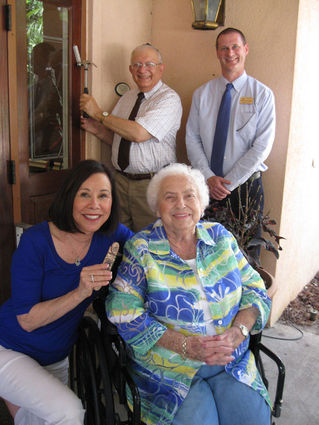 Monday afternoons are a time of celebration, song, and snack at Savannah Court and Cove in Maitland. Residents of all faiths and backgrounds stroll, wheel, or ambulate into the main hall at 3 p.m. on the dot, anxiously awaiting the arrival of the Jewish Pavilion volunteers, the force behind their weekly happy hour. On Monday, May 28, Savannah Court residents had an additional reason for celebration. A rabbi affixed a mezuzah to the doorpost with a moving ceremony, designating the facility as a welcoming home for Jewish residents.

Knowles stated, "We are happy to share the tradition of the mezuzah with our Jewish residents and visitors, and to provide an opportunity for education for all our residents."

Pavilion volunteer Jackie Leavitt presented the hand-crafted, ceramic mezuzah, which she had donated, spurring the day's events. In addition, Rabbi Siegel presented an educational forum, creating an opportunity for cultural outreach for residents of all faiths and backgrounds, furthering the goals of the Pavilion as well as the facility. Rabbi Siegel explained that a mezuzah marks the doorpost of Jewish homes, and contains a scroll inscribed in Hebrew with the most famous Jewish prayer, the Shema.

"We affix the mezuzah to remind us of our obligations as Jews, at every turn to do what is right and moral. In addition, it serves as a daily reminder of our heritage," said Rabbi Siegel.

Resident Linda Pappis asked if the scrolls contained the Ten Commandments. Siegel replied that the scrolls contain two portions from Deuteronomy and serve as a reminder of the 613 mitzvot, the good deeds that Jews should strive to fulfill. Pappis remarked that she had purchased a mezuzah as a gift for a friend in Miami more than 20 years ago, and thanked the rabbi for helping her understand the shared principles behind the object.

Members of the Pavilion and Jewish resident Bea Rozen joined Rabbi Siegel outside the front doors of the residence for the mezuzah hanging ceremony. Knowles assisted with placement as Siegel explained the reasons why the mezuzah was hung on a diagonal. He explained that Rabbis Rashi and Hillel each felt that the mezuzah should be hung in the opposite direction. They hung the mezuzah on an angle as a compromise. According to Jewishfederations.com, the mezuzah also came to represent the desire for peace within a Jewish home. Last, the group shared the prayer for the hanging of the mezuzah, as well as the Shehechayanu, expressing gratitude for the joyous occasion and gathering of friends. 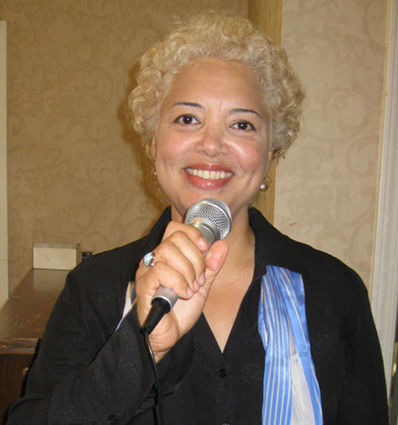 The celebration continued back inside Savannah Court, where residents enjoyed ice cream floats and chocolate dipped strawberries. The "Happy Hour" was aptly named, as Pavilion volunteer and singer Esther Portes moved the crowd with a selection of "golden oldies."

As the festivities came to an end, residents lingered longer than usual in the main hall, enjoying one another's company and the sense of community provided by the Pavilion and its volunteers.

Nancy Ludin, Pavilion executive director shared her feelings about the event. "We are thrilled that Savannah Court has made our Jewish residents feel at home with the hanging of the mezuzah. Many thanks to Rabbi Siegel and Greg Knowles for helping us have the "happiest of hours." May the mezuzah bring peace and happiness within this home this afternoon, and for many years to come."