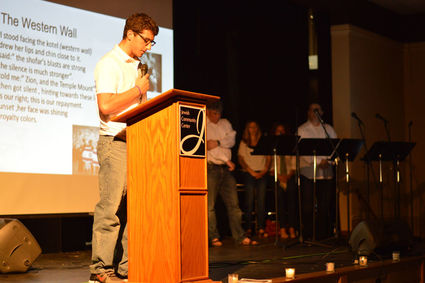 On Sunday evening, May 4, about 200 people gathered at the Roth JCC in Maitland for a solemn ceremony to honor those who gave their lives defending Israel.

Yom Hazikaron, Israel's Remembrance Day, was first officially established in 1963 to honor those who fought for Israel's independence. Today, it honors fallen soldiers as well as civilian victims of terrorism. Its very existence is a painful annual reminder of the price the Jewish people pay to freely live in their own land.

The Roth JCC observance began with a traditional minute of silence, and then a siren sounded for another minute. Rabbi David Kay of Ohev Shalom presided over Yizkor for the Israeli Defense Forces and led the community in Kaddish.

Invited speakers then came to the podium one by one to describe those whom they personally lost protecting Israel. As they spoke, some reciting poetry, a large screen behind the speakers displayed pictures of the deceased with their birth and death dates, as well as Israeli battle scenes where soldiers grieved and donned tefillin and prayed for those lost.

After each speaker, an Israeli quartet sang songs of prayer, mourning, and yearning. 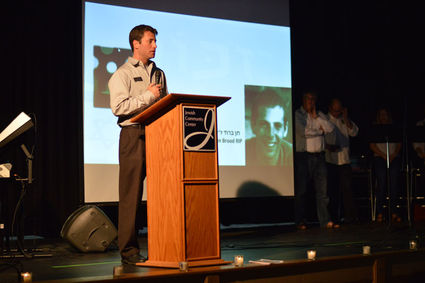 One Israeli man, speaking first in Hebrew then English, said definitively "the shock, the sadness, the loss, the anguish never truly goes away."

An American woman from Pittsburgh, who lost her son to Hezbollah near Lebanon, repeatedly recited "I lost my son in Israel on Oct. 6, 2004." With each recitation, she deleted a word. "I lost my son" eventually became "I lost," and "I lost" became pure silence.

All who led the ceremony ended the night expressing their deepest hopes-that Israel be left alone by its neighbors; that Israel finally be allowed to live in peace. The ceremony closed with Israel's national anthem, Ha Tikva, "the hope." Afterwards, many stayed to comfort one another and sing traditional Israeli songs.