By Richard A. Ries 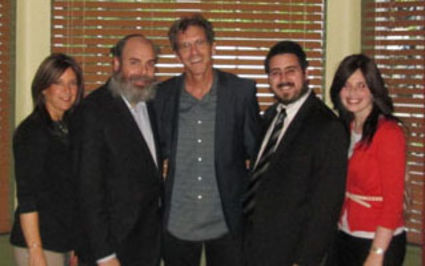 He's quite a character. And we know a lot of his characters: Shrek, The Smurfs, The Rugrats, and Boy Genius, to name a few. But Wednesday, May 7, at the Longwood Community Center, Jewish Orlando, courtesy of Chabad of Lake Mary, got the chance to meet one of Hollywood's most acclaimed and sought after living screenwriters: Oscar nominee and box office success David N. Weiss, whose films worldwide have grossed more than two billion dollars.

What comes to mind when thinking of the Hollywood and Beverly Hills rich and famous? The Kardashians? Ostentatious homes? Utra luxurious automobiles? Vanity and decadence?

For David Weiss, it's a kosher kitchen, donning tefillin each morning at a minyan, sending his children to a Jewish day school, and for him, a prize greater than any Oscar: to be referred to as "abba" by his children. It wasn't always that way for him though. In fact, it was just the opposite.

The now 50-something Weiss grew up in the not-very-Jewish Ventura, California. He says that his Reform education was "lukewarm, at best"-though he is quick to note that the Reform movement has evolved considerably over the past 30 years, and is far more spiritual and Jewish now than when "classical German Reform Judaism" seemed like Protestantism.

When in high school he encountered Christians "who knew their stuff," Weiss would mock their beliefs in the trinity and exclaim "there aren't three Gods, there's one God, and we don't believe in Him." An impressionable smart alec who was obsessed with the mathematical concept of infinity, his Christian comrades played up to his interest in infinity, slowly got him interested in reading the New Testament, going to church, and fully converting to Christianity. Weiss joked that "at least Christians all sing in the same key when they're in church," adding "and even finish at the same time."

Like many new converts to any faith, Weiss was more biblically knowledgeable and more zealous than many of those who grew up Christian. Because he was smart and entertaining, pastors saw great promise in him, and after a laying on of hands, appointed him a Christian youth minister. Weiss never denied his Jewishness, nor did he call himself a Jew for Jesus, but rather said that Christianity was his primary identity, and being Jewish a distant second one.

The Presbyterian pastors eventually sent him as a missionary to Dublin, Ireland. Here was an American Jewish-Protestant being sent to an Irish Catholic nation to try to steer lapsed Catholics toward Presbyterianism. However, while in Ireland, Weiss encountered a kippah-wearing Jewish animator from Chicago, David Steinberg, with whom he later in life collaborated on many films. Steinberg slowly challenged Weiss's Christian stance. "You can't convert from what you don't know," Steinberg maintained. The later famous cartoonist was the first domino in Weiss's long journey home to balancing fame with leading an observant Jewish life. Weiss became intrigued about the idea of God without a physical intermediary, an infinity of one.

The journey was not without its challenges. Weiss returned to America to marry his "dream Christian tall blonde" in a church. However, while trying to prove himself as a writer in Hollywood, Weiss met film critic and radio talk-show host Michael Medved, who invited him over to his house for Shabbos. Weiss, describing himself as "the village idiot," didn't actually know the term, but found Shabbos to be joyful. Another domino. Weiss slowly found himself weaving Jewish themes into "Shrek."

For a period of time, Weiss found himself going to synagogue on Saturday and church on Sunday. "But who," he asked with mock seriousness, "has the time to go to Costco if you're trying to do both?"

Judaism eventually won out. His wife wanted to convert by an Orthodox Beit Din and decided that she wanted a kosher home. Weiss told a story of how he came home one day to find an Orthodox rabbi blow torching his kitchen. "I don't think I can make this kitchen kosher," the rabbi said wistfully. "Of course you can't," shot back Weiss. "You've melted it into the ground!" 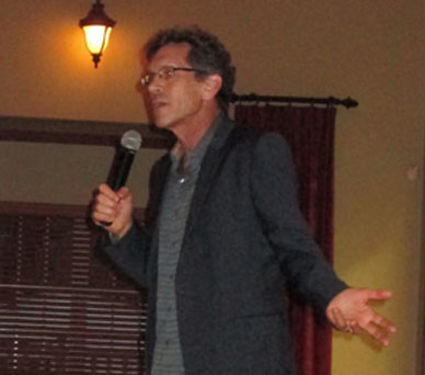 Weiss-creator of the Rugrats Hanukah Special, former vice president of the Writer's Guild of America, and an acquaintance of many famous people from the Dalai Llama to Jerry Seinfeld-used to be obsessed with infinity. But these days, wearing his tefillin six days a week-boxes that he refers to as his "GPS"-he only cares about the number one. "The Shema inside those boxes ends with echod, one" he told the Jewish Orlando audience. "That works for me."

Though Weiss used to fanatically try to convert others to Christianity, he has no taste for trying to dramatically change people as he did in his youth. "It's inherently sanctimonious to say to someone 'how you are isn't good enough,'" he said. He simply asks all Jews-whether they be Reform or Reconstructionist, Conservative or Orthodox-to take steps to understand their precious heritage and role on earth just a little bit better.