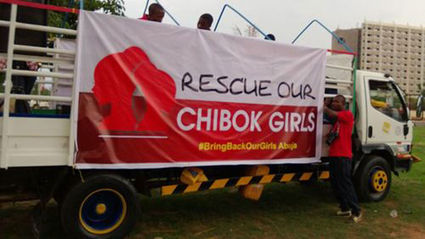 A truck promotes the #BringBackOurGirls hash tag used by protesters of the kidnappings in Nigeria committed by the terrorist group Boko Haram.

(Israel Today)-Israeli security forces have arrived in Nigeria to aid in the search for up to 200 young Christian girls recently abducted by the radical Islamist group Boko Haram.

On Monday, May 12, international media was abuzz after the publication of a video showing many of the captive girls dressed in Muslim garb and reciting passages from the Koran. In the video, Boko Haram leader Abubakar Shekau says the girls will be held and continued to be forcibly converted to Islam until jailed members of his group are freed by the Nigerian government.

The government of Nigeria President Goodluck Jonathan rejected the demand, and turned to the international community for assistance. Israel was quick to answer the call.

"Israel expresses deep shock at the crime against the girls," read a statement from Prime Minister Benjamin Netanyahu. "We are ready to help in finding the girls and fighting the cruel terrorism inflicted on you."

Members of a Nigerian delegation currently in Israel told Channel 2 News that their government had accepted the offer of Israeli aid, and confirmed that Israeli counter-terrorism experts were already en route to the West African nation.

An Israeli military official who just returned from Nigeria told popular Internet news site Buzzfeed that "in the wake of this crisis, Israel increased its assistance and we have been providing support in any manner possible. We have been involved on this from the beginning."

It was reported that at present, Israeli forces are helping to gather intelligence and guide Nigerian forces on how to best tackle the Boko Haram threat. Some Israeli radio commentators also suggested that Israeli special forces could be taking part in reconnaissance and combat operations.