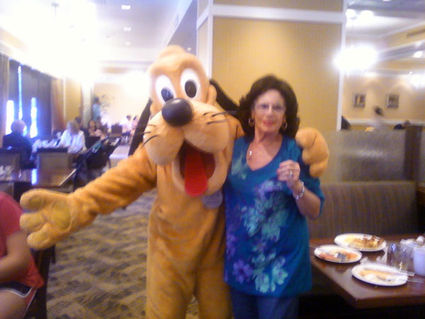 That expression fits me today like a loch in kop! But, believe it or not, I was once a great beauty. (Shut up!) My figure was superb; my breasts used to stand out proudly, but now gravity has taken them down. (I trip on them often); and all the muscles in my legs have turned to flab, acting like brakes when they rub together. (I can hardly walk!)

My face, that could once stop traffic (in NYC), now stops traffic everywhere! I recently told my spouse I was stunning. He said, "No, you are shocking!" (Or did he say "Schlocking?")

AARON LANSKY and many other people are trying to save Yiddish for generations to come. Aaron is president of the Yiddish Book Center. I recently received this letter (in part) from him:

"I am writing you (the public) to ask you to join me in a now-or-never effort to rescue precious Yiddish books and make their contents accessible to future generations before it's too late. Yiddish was on the brink of extinction. Yiddish books containing a thousand years of Jewish culture were being thrown out with the trash by a new generation of Jews who couldn't read or speak the language of their parents and grandparents. Thousands of Jewish families understood my desperate appeal. Some poignantly confessed that they had thrown away their parents' books years before; only now did they realize what a mistake they had made.

I rented a warehouse, borrowed a truck, and began going from city to city to collect these literary treasures. Jews call themselves Am Hasefer, the people of the Book; older Jews regarded their Yiddish books as their yerushe (the inheritance they were leaving to the next generation.) With great emotion, they would sit me down at their kitchen tables, serve me kikhlekh, gefilte fish, and tea in a glass, and hand me their yerushe, one book at a time. Every book had a story: when they bought it, where they were when they read it, and why I should drop everything and read it right then and there.

Book collection continues in the United States, Canada, Mexico, South Africa, Australia... wherever Jews settled, there are still books to be found.

But now we're facing an even bigger challenge: how do we take the books we've saved and place them in the hands of new readers, especially young people?

The first job is to finish scanning Yiddish books. We've entered into a historic partnership with the National Library of Israel... making Yiddish the first fully digitized literature in human history. And that's not all. We're working with a brilliant computational linguist in the French Pyrenees to make Yiddish literature fully searchable.

What about people who can't read Yiddish books in the original?

So far, less than 2 percent of Yiddish titles have been translated into English. Thousands of incredible Jewish novels and short stories are simply unknown to English readers. With your (the public) help we have a chance to change all that."

(If you want to help with this worthy project, go online to http://www.yiddishbookcenter.org/magnet.)

For the love of Tovah...

Reading this column, you know by now how important dogs are to me. So, when I received this letter in the mail, I knew I had to pass its message on:

When animal rescue workers found this poor dog (Tovah), she was all alone in the freezing cold, nearly starved to death. Her bones jutted out under her filthy coat, and her elbows were covered with painful sores. She couldn't stand or walk. The local shelter that rescued Tovah (they gave her that beautiful name) fed her and got her warm and comfortable but couldn't pay for all her medical needs... so the North Shore Animal League got involved and solved her medical issues.

You can find out more about this wonderful organization and how they can be helped by going online to http://www.AnimalLeague.org.

(Knowing that Tovah sounds like a Jewish name, made me want to help all the more. And speaking of dog names, I screwed up on Mother's Day at a Disney brunch by referring to (probably the most famous dog in the world) PLUTO, as Goofy. Oy Vey!

For the memory of Bonnie...

Bonnie was a wonderful dog... a service dog to MICHAEL PALUMBO, who suffers from seizures. Bonnie could tell when a seizure was about to happen. What a companion to Mike!

Unfortunately, Bonnie recently died, and Mike must replace her with a similarly trained service dog... but they are very expensive.

We can help by contacting SouthEast Border Collie Rescue, 400 South Kepler Road, DeLand, FL 32724 and mentioning you are interested in helping Michael Palumbo.

(Bless you for caring and helping.)

Mensch, which literally means man, but it has also come to mean a good person who does good deeds. According to the Jewish Federation of Greater Orlando (JFGO) their recent "Mensch of the Week" is GREG FINKELSTEIN. This is their reason for choosing him:

"Greg Finkelstein is the chief operating officer and senior vice president of Deltak/Innovation and has made a huge impact on the Jewish Academy of Orlando and thus the entire Jewish Community. He was the co-chair of the JAO Head of school search committee resulting in the hiring the new Head of School, ALAN RUSONIK. He brought a wealth of expertise, resources, and an abundance of time to make this such a successful and professional search. He never said 'No,' and gave of himself endlessly. He was inspirational to the committee, staff, board, and the entire community at large.

The future looks very bright for the Jewish Academy because of his hard work and dedication.

Greg Finkelstein is a true mensch!"

A return to Orlando...

I recently heard from our own DONNA FIEGEL about a talented fellow, DAVIS GAINES, who is Orlando's homegrown Broadway star.

For information and ticket prices, go to http://www.TicketWeb.com.

Bernie is walking down Park Avenue in Winter Park, when he notices the following sign in the store window of Moshe's Kosher Emporium... ALL THE DEVCIES YOU NEED FOR YOUR HOEM.

Seeing the misspellings, he goes inside and asks to see the owner.

"Can I help you, sir?" Moshe asks Bernie.

"I just wanted to point out that you have two spelling errors in the sign you have in your window."

"Yes, I know," says Moshe. "It's a deliberate marketing policy. You see, we get around a dozen people coming in here each day to point this out to us, and of these, at least 3 or 4 buy something. And now that you're in here, sir, can I interest you in our special low price for a kitchen table and four chairs?"

(Trust me, it's funny. You just have to think about it.)