Sleepless in Israel: Shavuot all-nighter comes to life in the Jewish state 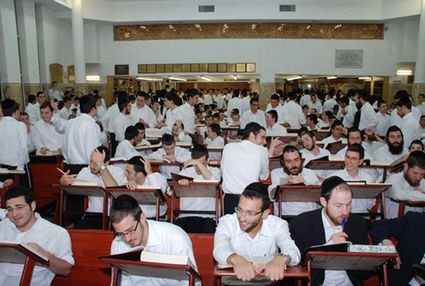 Torah study like what is pictured in this scene at the Kol Torah yeshiva in Jerusalem is typical of the first night of Shavuot.

Regarding Shavuot-when Jews from around the world celebrate the receiving of the Torah at Mount Sinai-Rabbi Chayim Vital wrote on behalf of his master Rabbi Isaac Ben Solomon Luria ("Ha'Ari), "Know that one who does not sleep at all on this night, even for one moment, but rather immerses himself in [the waters of] Torah the entire night, can be assured that he will live out his year; no injury will befall him during this year."

That level of protection is certainly a draw, but those who have experienced all-night Shavuot learning in Israel will testify that the experience brings with it other, less tangible rewards.

Less than a week after making aliyah to Ma'ale Adumim, Tanya Gusovsky was handed a list of the local all-night Shavuot learning "ops" by her new landlady, who also offered to act as her guide for the night.

Gusovsky says she will never forget the sight she beheld when, coming around the corner from her home, she spied "a river of people flowing in every direction, traveling from one shiur (lecture) to another." Two years later, despite the late hour, she can still recall the take-away messages of many of the teachers she heard that night.

In a way, the ancient tradition of all-night learning on Shavuot is designed to make up for some of our sleepy ancestors. The Midrash reports that, more than 3,000 years ago, our Israelite forebears slept in that morning when they were to receive the Torah. So in staying up all night learning Torah, we are trying to demonstrate their descendants' level of excitement about-and gratitude for-the gift of Torah.

The cheesecake, it seems, came much later.

Also known as the Festival of Weeks (See Exodus 34:22, Deuteronomy 16:10 for the Torah origins), the Festival of Reaping (Check out Exodus 23:16), and Day of the First Fruits (as in Numbers 28:26), Shavuot is celebrated for just one day in Israel, as opposed to two in the Diaspora.

The holiday numbers among the Shalosh Regalim, the three pilgrimage festivals when Jews everywhere finish up their seven weeks of Omer counting, which begins on the second day of Passover. Tradition also teaches that on Shavuot, the Jews would bring their bikkurim (first fruits of Israel's Seven Species: wheat, barley, grapes, figs, pomegranates, olives, and dates) to the Temple in Jerusalem.

The custom of all-night Torah study goes back, it appears, to 1533, when Rabbi Joseph Caro, author of the "Shulchan Aruch," a guidebook to Jewish law, invited many of his Kabbalistically minded colleagues to learn with him at a Shavuot all-nighter.

Besides Torah, Talmud, and Mishnah, many also learn the Tikkun Leil Shavuot (Rectification for Shavuot Night) with its excerpts from the 24 books of Tanakh. Legend has it that Rabbi Caro and others living in the Ottoman Empire at the time were able to keep awake thanks to the region's fine-and potent-Turkish coffee.

But although the Torah decreed it and the ancients pioneered its observance, Shavuot has made another mark on the Jewish psyche far more recently than the 16th century. In 1948, one month after the birth of the State of Israel, Jews were still banned from visiting the Kotel (Western Wall) by the Jordanians who were in charge of that part of the city. For 19 years, Jews would gaze across barbed wire fences at the Old City and Temple Mount they could not approach. But on Shavuot of 1967-just six days after the Israelis took back the Old City in the Six Day War-the Kotel was officially opened to the Israeli public. For the first time in nearly 2,000 years, Jews could visit the Western Wall and walk the ancient streets of the Old City. And some 200,000 of them poured in that day: religious and secular, Ashkenazi and Sephardi, all celebrating their newfound freedom to worship by those ancient stones.

These days, tens of thousands of Jews re-enact that return when they make their way to the Kotel in time for morning prayers, feet barely touching the ground after a full night of Torah learning and no REM sleep.

Among them will be the students at Orayta, a yeshiva located just up the steps from the Kotel.

"At dawn, we dance down to the Kotel to join upwards of 50,000 Jews for the morning prayers," says Orayta Rosh Yeshiva (dean) Rabbi Binny Freedman. "The intensity of Jewish unity as Jews of all shapes and sizes put aside their differences and come together is simply one of the most beautiful moments of the year."

They may not have the Kotel, but other communities around Israel also share in the tradition of all-night learning.

"There is an aura here around that night that's unlike any other night of the year," says Gabie Sykora of Ra'anana. "Women and men, teens and older people, religious and secular, everyone out all night learning in groups and chevrutas (pairs), in synagogues and in homes, like all Israel is learning Torah together. You know you are part of something bigger than yourself, and something in the air that night tells you that it's time to take your own spiritual growth up a notch."

Now, Sykora says, she can't imagine spending Shavuot anywhere but Israel. "In Israel, where our history took place, we are also participating in creating our people's destiny because we're still growing and learning. And where else in the world could you go to a shul for learning on Shavuot on a street named Har Sinai?" she says, referring to the Ra'anana street on which the Kehillat Shivtei Yisrael synagogue is located.

In the weeks leading up to their first Shavuot in Israel, the Sykoras witnessed a unique phenomenon: every imaginable variety of cheesecake blossoming in bakeries and supermarkets around town.

Dairy foods such as cheesecake and blintzes among Ashkenazis, and other cheesy treats such as kelsonnes (cheese ravioli) among many Sephardis, are an integral part of the celebration-often washed down with the coffee in hopes of keeping the all-night learners conscious.

Rabbi Avraham Sutton, author of "Spiritual Technology: On the Transition from Profane Technology to Sacred Technology in Preparation for the Great Shabbat" and many other books, says staying focused on the learning and skirting any off-topic chats helps keep him awake.

Tanya Gusovsky's first Shavuot in Israel two years ago served as a potent reminder of why she had left the U.S. and made the Jewish state her home.

"There I was, just days into my life here, and to be treated with this amazing feast of learning... It was such a feeling to be one of the people who felt strongly about where they belong, and thankful for that sense of unity and utter trust in our mission here," she says.