A pope, a rabbi and a sheik went to Israel 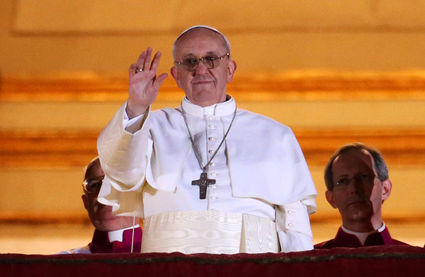 Pope Francis I waving to the crowds on the central balcony of St. Peter's Basilica in Vatican City March 13, 2013.

ROME (JTA)-With a rabbi and a Muslim sheik as his travel companions, Pope Francis headed to the Middle East with what he hoped to be a powerful message of interfaith respect.

It was the first time that leaders of other faiths were part of an official papal delegation. The aim was to send "an extremely strong and explicit signal" about interfaith dialogue and the "normality" of having friends of other religions, chief Vatican spokesman Rev. Federico Lombardi told reporters.

The two men joining Francis are friends with whom the pope frequently collaborated when he was the archbishop of Buenos Aires: Rabbi Abraham Skorka, former rector of the Latin American Rabbinical Seminary in Buenos Aires, and Sheik Omar Abboud, a former secretary-general of the Islamic Center of Argentina.

"I don't expect Francis to wave a magic wand and bring together Jews and Palestinians," Skorka told the Italian Catholic newspaper Avvenire. "But his charisma and his great humility can give a powerful message of peace for the whole Middle East."

Since being elected to the papacy in February 2013, Francis, the first non-European pope in more than 1,200 years, has become known, and widely hailed, for breaking protocol, shunning the grand trappings of papal power and reaching out to the faithful on a personal level.

On his trip, Francis insisted that he would not travel in a bulletproof vehicle or special popemobile. Rather, he got around in "a normal car or open-topped jeep" in order to be closer to the people who came out to greet him, according to the Vatican spokesman.

Eric Greenberg, the director of communications, outreach and interfaith for the Multi-Faith Alliance for Syrian Refugees, said Francis' ability to captivate world media meant every step of his visit was watched closely.

Francis began his trip in Jordan and proceeded the next day by helicopter to Bethlehem for a 6 1/2-hour stay. He met there with Palestinian officials, celebrated an open-air Mass in Manger Square and visited with children from Palestinian refugee camps.

From Bethlehem, Francis flew by helicopter to Ben Gurion Airport and then went up to Jerusalem. He visited the Yad Vashem Holocaust Center and the Western Wall, where like his predecessors Benedict XVI and John Paul II, he left a message in a crack between the stones.

The pope also visited Christian sites and the Temple Mount, a site that is sacred to both Jews and Muslims and the locus of recent clashes between Israeli police and Palestinians protesting Jewish visitors.

In recent years, the Vatican has made the state of Christians in the Middle East a priority issue. Latin Patriarch Fouad Twal, the top Roman Catholic clergyman in the Holy Land, said this month that the recent spate of anti-Christian graffiti attacks by Israeli Jewish extremists "poisons the atmosphere of coexistence" surrounding the papal visit. He chided Israeli authorities for not cracking down.

Rabbi David Rosen, the American Jewish Committee's international director for interreligious affairs, said the media attention resulting from the papal trip has prompted some action to be taken against the extremists.

Francis is the fourth reigning pope to visit Jerusalem. His trip marks the 50th anniversary of the first papal visit to the Holy Land, Pope Paul VI's pilgrimage in January 1964. On the trip, Paul's meeting in Jerusalem with Patriarch Athenagoras, the spiritual leader of Orthodox Christians, was a major first step toward reconciling the 1,000-year rift between Western and Eastern Christianity.

The centerpiece of Francis' stay was his meeting with Ecumenical Orthodox Patriarch Bartholomew and an ecumenical joint prayer service with leaders of other Christian churches in the Basilica of the Holy Sepulcher in Jerusalem.

Paul's trip, the first by a reigning pope outside of Italy, came in a vastly different context than today in terms of Jewish-Catholic and Vatican-Israel relations. The visit came one year before the Second Vatican Council promulgated its Nostra Aetate declaration, which opened the way to interreligious dialogue between Catholics and Jews.

It also took place decades before the Vatican and Israel established diplomatic relations with a Fundamental Agreement signed at the end of 1993. During his stay in Jerusalem, Paul did not even pronounce the word "Israel."

For the past 20 years, Israel and the Holy See have attempted to reach agreement on several outstanding bilateral issues, including establishing the juridical rights of the Catholic Church in Israel as well as regulating property and taxation issues.

Just ahead of the pope's visit, Israeli officials quashed rumors that Israel planned to transfer the Cenacle-the site where Jesus' Last Supper took place-to the Vatican. Francis is to celebrate Mass at the Cenacle, which is revered by Christians.

Jews venerate the site as King David's Tomb, and on May 12, hundreds of haredi Orthodox protested there demanding that Israel retain control.

All of these factors and more mean that it is impossible to separate bilateral Israel-Vatican relations from Catholic-Jewish relations, the AJC's Rosen says.

Papal visits to Israel, he said, demonstrate "the remarkable new Catholic and Christian positive affirmation of the roots of its identity and its commitment to the welfare of the Jewish people."

Moreover, he said, "I greatly hope that there will still be an opportunity for an interfaith encounter with local representatives of the faiths communities in this land somewhere on the papal itinerary. I actually think that to bring along an Argentinian rabbi and imam is very nice, but if there is no interfaith meeting with the locals, it might be seen locally as rather disingenuous."