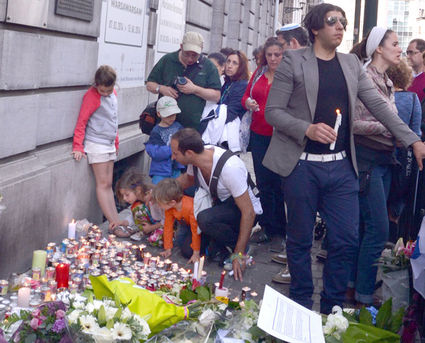 Adults and children participating in a silent vigil outside the Jewish Museum of Belgium in Brussels for the four victims of a shooting there by an unidentified gunman, May 25, 2014.

BRUSSELS (JTA)-Hunched over a small island of memorial candles for the victims of the attack on the Jewish Museum of Belgium, Paul Ambach is lost in thought.

"Once again, Jewish blood in Belgium, which is no longer Belgium," said Ambach, a well-known Jewish musician from Antwerp, as he stared at the candles Sunday from a vigil for the four people killed by the unidentified gunman who opened fire at the museum the previous day.

Ambach said he was also thinking about past attacks on Belgian Jews, including a 1981 car bombing outside an Antwerp synagogue that left three dead.

Undeterred by the fact that the killer is at large with at least one other accomplice-a driver who brought him to the scene-approximately 2,000 people, many with their small children, showed up at the museum entrance for a vigil a mere 27 hours after the attack.

The gathering was also attended by Belgian Prime Minister Elio di Rupo and other ministers, who took time off from Belgium's federal elections Sunday to show solidarity with Belgian Jewry.

Also present was a group of young Muslim women.

"We don't know who is behind this, and it doesn't matter. We came because we are hurting and crying inside," said one of the women, Yfia Souad.

Another group of Jews convened nearby for a screening of a film about the Holocaust. The event had been scheduled long before the shootings, but instead of canceling, organizers dedicated the event to remembering the museum attack's victims-Emanuel and Miriam Riva, a married couple in their 50s from Tel Aviv; Alexandre Strens, an employee of the museum in his 20s; and Dominique Chabrier, a French volunteer at the museum.

Security camera footage from the museum showed the killer approaching the entrance to the museum quickly but calmly while carrying two bags and wearing a baseball cap that obscured his eyes from the lens. Placing one bag on the ground, he produced an automatic rifle and entered the museum for approximately one minute.

Inside, he opened fire, hitting his victims in their heads and necks, before making his escape.

Counterterrorism experts said the man's apparent calm, quick getaway and selection of target-the museum is one of the few Jewish institutions in Brussels that is not under permanent police protection-suggest meticulous preparations and perhaps some training.

As Belgian police launched a manhunt, reports emerged that the perpetrator was wearing a camera in what analysts said was a sign that he was following the pattern of Mohammed Merah, who documented his 2012 attack on a Jewish school in Toulouse, France, that left four Jews dead.

Standing in front of the museum's door, Ambach wondered why it was not armored and guarded like the Great Synagogue of Europe, which is located 400 yards away and was the site of a 1982 shooting attack that wounded four.

Agnes Bensimon, a Jewish mother from Brussels who attended the screening, said fear would not prevent her from attending a Jewish gathering.

"It's a frightening thought, but there is no question of capitulating," she said. "That's what terrorists attempt to achieve, and they will not achieve it here. Sadly, we are experienced."