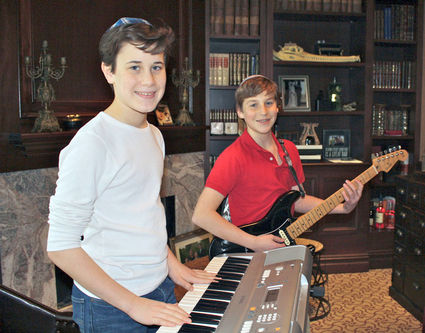 Over the winter, Goldberg and Levine, both 13 and seventh-graders at The Moriah School in Englewood, N.J., met with their music teacher and spent a collective 75 hours in a local studio to record an album they titled "Tikun Olam."

The goal of the album, they said, was to raise money for Leket Israel, an organization that serves as Israel's national food bank and food rescue network. In 2013, Leket reached more than 140,000 people weekly by redistributing food that otherwise would have been wasted to 180 nonprofits that work with the needy.

"I thought this was a good thing to do to help," said Goldberg. "People should have the right amount of food to be healthy and get through the day, and [food] shouldn't go to waste."

Goldberg and Levine are hoping to raise $45,000 from album sales so Leket can lease a much-needed 15-ton refrigerated truck for a year. To date they have brought in nearly $14,000.

On the album, Goldberg sings and plays piano; Levine is on guitar. It features 11 songs ranging from the prayer Na'ar Hayiti to Billy Joel's "New York State of Mind" and "Sweet Child of Mine" by Guns N' Roses.

"It was a great experience and a lot of fun," Levine said. "It was an honor, and Sam and I knew we were doing a big mitzvah."

JTA spoke to Goldberg and Levine about the biggest influences in their lives, the meaningful Jewish experiences they've had recently and what they like to do for fun.

JTA: Who or what have been the biggest influences in your life?

Goldberg: Musically, Billy Joel, Chris Martin and Bono. Generally, obviously my parents. They push me to do the best that I can do.

Levine: My siblings, all of them.

If you could have lunch or coffee with anyone and tell him or her about the album, who would it be?

Goldberg: Chris Martin because he's the coolest guy ever.

Levine: My great-grandfather. He's not alive, but if I told him, he'd be very proud of me. He was a chazan.

Can you share with us a meaningful Jewish experience that you've had?

Goldberg: This past November, I went to Israel with boys from my grade and their fathers. We went to see a lot of cool places that I'd never seen before. It was really meaningful and I enjoyed it.

Levine: This year I went to Hebron the weekend when Chayei Sarah was the Torah portion. It was very inspirational visiting [Sarah's] grave; it was a great experience.

Levine: Pesach, because every year I go to Florida and have a lot of fun.

What do you think you want to be doing when you "grow up"?

Goldberg: Something professionally in music, either a sound engineer or performing.

Levine: I want to be a doctor. If someone's hurt, I want to help.

Goldberg: I play music and play hockey, with a little fighting in the rink.