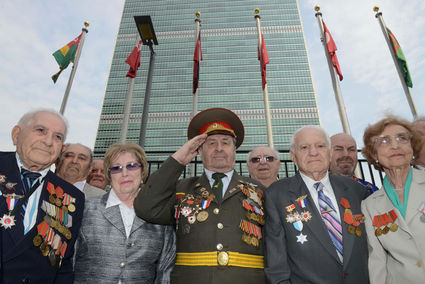 Approximately 150 Russian Jewish Red Army veterans showed up for the official announcement of a new holiday celebrating the 1945 liberation of European Jewry.

NEW YORK (JTA)-Sol Lapidus earned the Order of Lenin, the Soviet Union's highest medal, for his role as a partisan fighter in the Belarussian forest during World War II.

The small army of aged veterans had gathered to make history again, to announce what was billed as the creation of a new Jewish holiday: "Rescue Day of European Jewry."

Inspired by Russia's Victory Day, which marks the anniversary of Germany's official surrender on May 9, 1945, the new holiday will be marked on the 26th of Iyar, the Hebrew date on which the surrender took place.

For years, Victory Day has been celebrated not just in Russia but in countries with major Russian emigre populations, including Israel.

Rescue Day grew out of an international coalition of Russian Jewish groups, including the American Forum of Russian-Speaking Jews and the STMEGI Foundation, whose activists approached Jewish leaders around the world to call for a global Jewish recognition of the liberation. The activists won the support of Keren Hayesod-United Israel Appeal, the World Zionist Organization, the Israeli government, Israel's Chief Rabbinate and chief rabbis from Europe.

"Some people have been asking if we need to do another holiday besides May 9, but these people who spilled blood deserve to be thanked 365 times a year," said Igor Branovan, president of the American Forum of Russian Speaking Jewry. "This generation is not going to be around much longer."

Indeed, most of the veterans at last Wednesday's official announcement-hosted by Israel's U.N. mission in a room with dramatic views of the East River-were 80- and 90-somethings, many relying on canes and walkers. Some arrived in full Soviet military uniform. Widows wore their late husbands' medals.

From the front of the room, a violinist played Russian songs. Later, a woman led the crowd, seated at round tables, in "Katyusha," the Russian war song after which the rocket launcher is named.

These immigrants from the former Soviet Union are among the dwindling ranks of those who fought in the Great Patriotic War, as World War II is called in Russia. Several said they had been drafted at age 17, when the war began, and continued fighting until the end.

Speaking through an interpreter, Yosef Kruglyak, dressed in his navy uniform, said he served as a sailor and gunner for seven years in the Black Sea. From a family of 10 children-his mother was a "Mother Hero," an honor the Soviets gave to encourage high birth rates-he lost two brothers to the battlefield and several family members to the Holocaust.

"The members of my family that survived all left Belarus three days before the Nazis came," he said.

Yosef Sosna, also using an interpreter, said, "I wish there would be no more wars in the world." 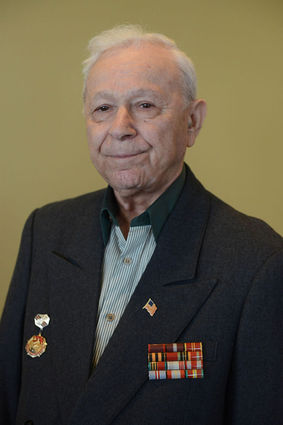 Asked what was most difficult for him during World War II, Sosna, who worked in counterespionage, mentioned a battle in Sevastopol "with a lot of losses" and the difficulty of guarding a group of captured German soldiers between 1943 and 1944.

Sosna, who at 17 was sent to a Khabarovsk academy for two years of counterespionage training, spent the war identifying Nazi spies on the front and reporting them to the authorities. After the war he stayed in the Soviet army, becoming a major in 1955. The Ukraine native immigrated to the United States in 1997.

He said he did not experience any anti-Semitism during the war.

"There was nothing like that because everyone was fighting for the same reason," Sosna said. "Also, I was in counterespionage, so if someone had anti-Semitic thoughts, they were afraid to share them with me."