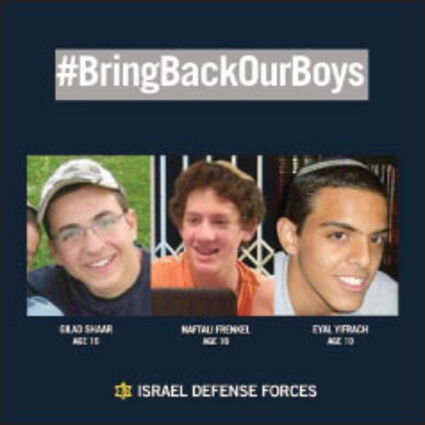 The Jewish Federations of North America sent the following letter to Israeli Prime Minister Benjamin Netanyahu: "We are writing to you at this difficult hour to declare the complete solidarity of the Jewish community of North America with you, with the families of the abducted students and indeed with the entire people of Israel. At this critical moment you should know that The Jewish Federations of North America, representing 153 federations, 300 smaller Jewish communities, and the entirety of the North American Jewish community, stand shoulder to shoulder with the government and people of Israel. The three kidnapped teens are our sons too, and we join with Jewish parents around the world to offer our prayers, thoughts and solidarity with you as you stand up to terror and mount every possible effort to bring the boys home."

The Algemeiner staff reported the following in Monday's online news:

A branch of the 'Islamic State in Iraq and Syria' terror group has claimed responsibility for the disappearance of three Israeli teens in the West Bank on Thursday night, Israeli media reported.

The terror group has gained prominence in recent days for capturing large swaths of western Iraq after three years of fighting in the Syrian civil war. ISIS has developed a reputation for particular brutality including beheadings, mass murder and crucifixions.

On Friday, Reuter's Jerusalem bureau fielded a call from 'Dawlat al-Islam,' an ISIS branch operating in Hebron. The caller claimed responsibility for the kidnappings and said the incident was in retaliation for the killing of three of its members, Fox News contributor Lisa Daftari reported on her blog.

Israeli Army forces are currently conducting a widespread operation in order to locate the missing individuals. Two of the boys are 16 years old and attend the Mekor Chaim Yeshiva High School in the area. The third teen is 19.

Security officials believe that a torched car found by Palestinian police in the vicinity of Hebron on Friday was likely used in the presumed kidnapping of the students, the Times of Israel reported.

The three got on a hitch at about 22:30 Thursday night near the Israeli village of Alon Shvut, according to Israel Radio. One of the youths managed to send an alert to the local security hotline before his cellphone went dead.

One of the boys holds American citizenship, and the government has alerted the U.S. Embassy.

Terror group Hamas is calling the trio "Israeli soldiers" and Hamas and Islamic Jihad have called for kidnapping Israelis as bargaining chips to gain the release of Palestinian convicts.

A Hamas spokesman rejoiced in the news, saying, "the Hebron operation is a great success for the [Palestinian] resistance in the West Bank." The Palestinian Authority, which recently inked a government unity agreement with the terror group, has of yet not made a statement.

The Israelis, however, say that they hold the PA responsible for the safety of the boys.

"Israel holds the Palestinian Authority responsible for the well-being of the three missing teenagers," Aaron Sagui, the spokesman of the Israeli Embassy in Washington told The Algemeiner.

Israeli Prime Minister Netanyahu called the families of the teens, in order to comfort them and tell them that the government and security forces were doing everything possible to find and rescue their children.

Both of Israel's chief rabbis have called on the public to pray for the safety of the boys, and to keep them in mind when lighting Sabbath candles. The rabbis advised reading Psalms 121 and 130, for the teens's sakes.