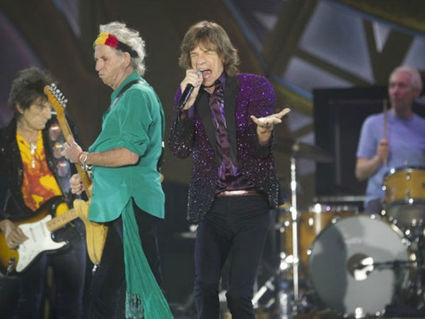 (PaulieGroup) With the first chord of one of the most famous guitar riffs reverberating through the amplifiers June 4, 50,000 music fans were greeted with the 1981 classic Start Me Up, as the Rolling Stones made their Israeli debut in Tel Aviv's Yarkon Park.

As promised, the band took the stage at 9:15 p.m., pushing back their original start time to enable observant Jews to attend the entire concert after sundown marking the end of Shavuot, a holiday that celebrates the giving of the Torah at Mount Sinai.

As reported by The Times of Israel, the band played a 19-song set that included Brown Sugar, Jumpin' Jack Flash, Honky Tonk Women, It's Only Rock 'n' Roll (But I Like It) and Angie, a favorite amongst Israeli Stones fans.

About an hour into the two-hour show, the crowd was treated to a glimpse of the band in the early 1970s. Mick Taylor, who replaced founding Stones guitarist, the late Brian Jones, in 1969, joined the band for a performance of Midnight Rambler. Haaretz music critic Ben Shalev described Taylor's part of the show as "very long and very wonderful."

Also joining the band on stage was Tel Aviv University's Buchmann-Mehta School of Music Choir, performing, You Can't Always Get What You Want. When originally recorded in 1968, the song featured the London Bach Choir. During the performance, Jagger reportedly showed off his Hebrew chops, saying to the crowd "Anachnu ha'avanim ha'mitgalgalot" (We are the Rolling Stones), "Hokol sa baba?" (All good?), and asking guitarist Ronnie Wood, "Kanita na'alayim ba'shuk?" (Did you buy shoes in the market?).

Members of the band, who are older than the Jewish State, enjoyed the younger nation during their stay.

Ronnie Wood and drummer Charlie Watts traveled to Jerusalem to visit its Old City. Jagger tweeted from the town of Caesarea, a small coastal city located mid-way between Tel Aviv and Haifa, where he reportedly went jogging. He and other band members were also spotted in a cafe near their Tel Aviv hotel.

The band ended their two-hour performance with a two-song encore. The aforementioned You Can't Always Get What You Want and their 1965 classic (I Can't Get No) Satisfaction.

Publicly modeling the courage of conviction, the band defied pressure from a small minority of anti-Israel voices such as Pink Floyd alumnus Roger Waters, who went as far as to pen an open letter asking the band to refuse to perform in Israel in an effort to show solidarity with the Palestinian cause.

But the message that the "arts can build bridges" prevailed-giving the anti-Israel Divestment and Sanctions movement another blow in their efforts to delegitimize Israel.

"Artists want to play for their Jewish, Muslim and Christian fans in Israel because they realize that it promotes peace and understanding, said Lana Melman, director of the nonprofit Creative Community for Peace. The Stones' performance comes off the heels of last month's concert by Justin Timberlake who also performed at Yarkon Park. During his trip, which included his parents and wife, actress Jessica Biel, Timberlake posted a photo of himself in prayer, with both hands touching the Western Wall, to his social media accounts with hashtag "#Israel," causing an uproar amongst anti-Israel voices.

Kol ha'kavod (Way to go), Stones! You Can't Always Get What You Want-but sometimes you do!

Paul Miller is a journalist and op-ed contributor to the Franklin Center for Government & Public Integrity. He serves as principal of Pauliegroup LLC, a Chicago-based new-media and political consulting firm. His articles and editorials have appeared on the Drudge Report and in the New York Post, Chicago Tribune, Jerusalem Post, San Diego Union-Trib, Fox News and Washington Times.