As many as could squeeze in, stood for a group photo after the vigil, showing the Orlando Jewish community's support for Eyal, Naftali and Gilad and their families.

"Hine(y) ma tov u'ma-nayim, Shevet ach-im gam ya-chad," reads the first verse of Psalms 133. ""Behold, how good and how pleasant it is for brethren to dwell together in unity!"

As American Jews across the country joined together in solidarity to express concern for the three Israeli teens who were kidnapped on June 13, the Jewish Federation of Greater Orlando and the Greater Orlando Board of Rabbis organized a #BringBackOurBoys solidarity vigil for Gilad Shaar, Naftali Frenkel and Eyal Yifrah on Thursday evening, June 19.

Before a packed JCC auditorium, Ina Porth, chairwoman of the Community Relations Council, opened the vigil with words from Natan Sharansky, the former Soviet refusnik who was held captive for nine years. Sharansky visited with two of the boys' families and told them that he stayed strong because he knew world Jewry stood with him.

David and Cathy Swerdlow, who were in the audience, feel a very close connection to these young men, explaining the reason for coming to this vigil was because they have two daughters living in Israel. "We support the boys and hope they come home," said Cathy. "This is so very close to our hearts," David added.

Jeanne Silberstein also has a daughter in Israel. She lives near Jerusalem and calls home everyday. In fact, Silberstein said her daughter called her to say "Don't worry, I'll be careful hitchhiking," before the news broke in the U.S. about the kidnapping.

Having relatives in Israel isn't the only reason people came to express solidarity. Shana Medel and her mother, Lynell, were there because they feel a "strong connection to Israel."

Others, like Celia Bonhagen and Bob Rabideau, said they believe in the power of prayer and want to support the families of the boys.

Congregation Ohev Shalom, Southwest Orlando Jewish Congregation, Temple Israel and Chabad were represented, but this vigil was not about Conservative, Orthodox or Reform groups. It was a gathering of Jewish people, standing together in support of their Jewish family in Israel.

"We are united in heart, soul and with our People in Israel, the world and the Holy One," said Rabbi Aaron Rubinger, senior rabbi of COS. "We should remain unified as a people - not just now, but loving and caring for each other with respect always," he added.

Debbie Meitin, cantorial soloist for Temple Israel, sang in a beautiful soprano voice the words of Psalms 121, which in part says, "Behold the Guardian of Israel will neither slumber nor sleep."

Rabbi Sholom Dubov of Chabad of Greater Orlando, led the responsive reading of Psalms 130. "Israel, hope to the Lord, for kindness is with the Lord and much redemption is with Him."

JCC Summer Camp Israeli emissaries Mayaan Zaig and Noa Neumann with Jewish Academy of Orlando 2014 graduate Estrella Varnagy led the group in a prayer for the State of Israel, followed by Spiritual Leader Beth Schafer of Temple Shir Shalom, who led the audience in "Acheinu," which translated reads, "As for our brothers, the whole house of Israel, who are given over to trouble or captivity, whether they abide on the sea or on the dry land; May the All-present have mercy upon them, and bring them forth from trouble to enlargement, from darkness to light, and from subjection to redemption, now speedily and at a near time..." 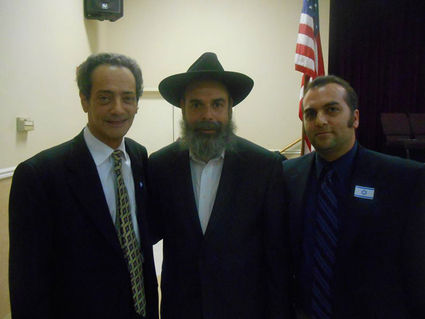 Rabbi Hillel Skolnik of SOJC closed the vigil with words of encouragement to "use our voices to support the State of Israel."

"No one is going to shout for us," he stated. "We must shout for ourselves and for others."

Some ways to show support right here are:

Sign the Letter of Unity to the families on http://www.bringbackourboys.net

Keep informed by visiting the Israel Ministry of Foreign Affairs, Embassy of Israel to the U.S., and IDF Facebook pages. Then inform friends and family of the situation.

Pray and recite Psalms (such as were mentioned in this article) for the missing boys. Light an extra candle on Friday night and have in mind the names of these young men.