By JNS.org and Israel Hayom 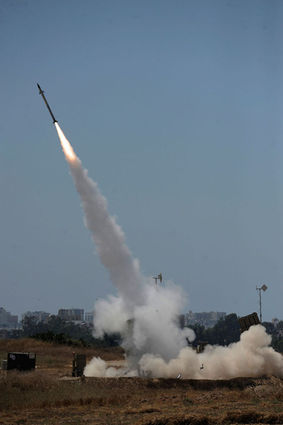 The Iron Dome missile defense system battery launches an intercepting missile near the Gaza border in southern Israel on Tuesday, the first day of the Israeli army's Operation Protective Edge.

The Israel Defense Forces (IDF) launched "Operation Protective Edge" in Gaza after at least 80 rockets and mortar shells were fired at Israel on Monday night.

Above Netivot and Ashdod, the Iron Dome missile defense system shot down 12 rockets. In Ashdod, residents fled for shelter as rocket sirens sounded throughout the city, and eight people were injured. Beersheba-Israel's largest southern city-and Ofakim were also subjected to Gaza rocket fire, with most of those rockets either striking open fields or being intercepted by the Iron Dome. Early warning sirens went off in Jerusalem and Beit Shemesh, but they were apparently false alarms.

Israeli Defense Minister Moshe Ya'alon declared a state of emergency in communities within 25 miles of the Gaza border. On Tuesday, Israel approved the call-up of 40,000 reserve soldiers after the IDF had already summoned 1,500 reserves. Prime Minister Benjamin Netanyahu said Hamas "chose to escalate and they will pay dearly for it."

"We must be prepared to go all the way, and a ground offensive is also on the table," Netanyahu said.

At the start of its operation on Tuesday morning, the IDF said it struck 50 Hamas terrorist targets in Gaza.

"This battle will not end in just a few days," Ya'alon said.

Students taking their English final exam in Beersheba on Monday had their test interrupted by "Color Red" incoming rocket sirens. Elisha Peleg, principal of Beersheba's AMIT Wasserman High School, said both the high school students taking the test and sixth-graders who were in the school for summer camp "displayed remarkable resilience and acted responsibly."

Classes at the Sapir College in the rocket-battered southern city of Sderot were canceled Tuesday and Wednesday, and Ben-Gurion University in Beersheba said there would be no final exams on Tuesday. In Ashkelon, Ashdod, Gan Yavne, and the surrounding area, gatherings at the beach, performance halls, and any other places whether the number of people could reach dozens were temporarily banned. Summer camps in Ashkelon and Ashdod were canceled until further notice.

Israeli residents have expressed their fears of a further escalation in rocket fire.

"It's scary, you hear that terrifying sound a rocket makes as it flies over you," said Sabrina Cohen of Netivot. "It conjures these horrible world-is-ending thoughts, and then suddenly the explosion, no less scary, when [the] Iron Dome [system] intercepts the rocket. Why does this have to be our routine?"

Amid the announcement of Operation Protective Edge, some Israeli government

officials are calling on the IDF to retake Gaza, which Israel evacuated in 2005 under former Israeli Prime Minister Ariel Sharon's controversial disengagement plan.

"The Islamist terror base [in Gaza], with its thousands of rockets pointed at us, didn't happen by accident. It happened because of our mistakes, pulling out of Gaza and letting Hamas run in the [2006 Palestinian] elections," Likud MK Ze'ev Elkin, chair of the Knesset Foreign Affairs and Defense Committee said, told Israel's Channel 2.

In late June, Israeli Foreign Minister Avigdor Lieberman advocated a similar position, saying at the time that only a limited operation in Gaza "just strengthens Hamas."

Hamas spokesman Sami Abu Zuhri said he hopes the IDF enters Gaza on the ground so that the terrorist group can kidnap Israeli soldiers.

"As long as the occupation attacks, we'll respond, and it will pay the price of its crimes. Our will won't break," Abu Zuhri vowed, adding, "I hope the occupation makes this error and enters Gaza in a ground operation, so that we'll have an opportunity to abduct soldiers."

Hamas claimed responsibility for a barrage of rockets that prompted Israel to launch Operation Protective Edge, which as of Tuesday was limited to airstrikes.