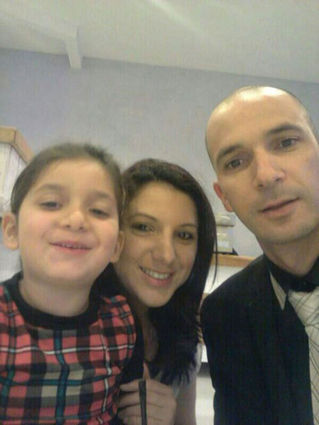 Einav Koren (center) and her family in Ashkelon. Koren, who is six-months pregnant, says her 5-year-old daughter won't go to the bathroom by herself anymore. And when her daughter hears a rocket siren, she runs for the bomb shelter, dropping whatever she is holding and knocking away anything in her path.

"I feel so vulnerable when I am driving my car," said Ehud Zion Waldoks of Beersheba. "I am constantly preparing to stop abruptly, to leap out and grab my daughter and run for cover. I am calculating my speed to be a little faster than usual, but not reckless. I am checking where the nearest wall is at every traffic light."

Waldoks's story is similar to that of all southern Israelis-and now most of the state of Israel, as rockets penetrate deeper than ever into the Jewish state. But as a resident of Beersheba, Waldoks is more accustomed than others to the sound of sirens, to the 60-second rush to the bomb shelter. It has happened before. There were similar flare-ups with Gaza in 2008-9 and 2012.

Yet consistency doesn't make it easier, he said. In some ways, the ongoing rocket attacks, coupled with periods of heightened terror, make it more challenging. The current Israel-Gaza conflict will end, he said, but the war will have lasting effects on the nation.

The test of talking about the war with one's children is almost impossible to pass. Recently, the Israeli website Mako published an article offering tips for making the experience more bearable and appropriate. The first rule: don't lie. Young children, psychologists recommend, should be spared the details but simply hugged and reassured. Slightly older children, up to age 5, may benefit from drawing about their emotions or role playing.

By age 6, psychologists recommend that parents explain about the army operation-currently called Operation Protective Edge-and the Iron Dome missile defense system; teens can be told what is really happening and should be empowered to take an active role in supporting younger siblings and those less able or stable than themselves.

Parents on the ground said they read this article, but they find that the reaction to rockets has only somewhat to do with age, and more to do with maturity and general outlook. In the Waldoks home, there are three children under the age of 7, and the oldest is therefore forced to make her way into the shelter in the middle of the night on her own.

"We are carrying the little ones so [the oldest] cannot be carried by one of us," Ehud Zion Waldoks told JNS.org. "It is so hard for her. In the moment, in the middle of the night, she hears the rockets and she does not know what is going on. But she does it-without any physical contact from us, without us holding her hand."

Their oldest daughter, he said, is consumed with questions about Operation Protective Edge. In contrast, their 2-year-old sees the nightly gatherings almost like a party. He doesn't know what's going on.

In Ashkelon, Esti Day's 1-and-a-half-year-old daughter is having a different experience.

"Whenever she hears sirens, she start screaming," said Day. "She yells all the time. She wants to sleep in the shelter. When the siren is over, she doesn't want to go out."

Being a parent during war, Day said, means putting your own needs and wants aside. It also means being prepared.

"Take something as simple as a shower. Now, you have to do it very quick and have the towel beside you. You need to make sure all the children come in the bathroom with you-there wouldn't be time to get them from another room," she said.

Shachar Liran-Chanan, a student of psychology and education at Ben-Gurion University, explained, "Parents are told to stay calm. They try to hide their real feelings from their children. But the children see through them."

"It is very different when you have children," said Einav Koren of Ashkelon. "I worked for five years at Sapir College in Sderot. My parents were also so worried and I could not understand it. Now, as a parent, I am more worried about the kid than myself."

Lilach Nissim of Herzilya works with the municipality to prepare for emergency situations such as the current one. Born and raised in Ashkelon, she spent three years working in the rocket-battered city of Sderot.

"Imagine yourself having two or three small children," she said. "Your husband is not home and there is an alarm and you have to get to the shelter in 15 seconds. You cannot take them all. Who do you take first?"

Nissim said her cousin in Ashkelon was once driving when a "code red" siren sounded. Her then 3-year-old and 10-month-old children were strapped into the car. She stopped the car, but in less than 15 seconds needed to decide what to do: either take them out to lie in the middle of the street, or grab one and run for shelter.

"She took the small baby and ran and left the big one in the car," recalled Nissim. "He sat there crying. She will never forgive herself for the choice she made. These are the dilemmas that lots of parents are dealing with."

On the other side of the border, in Gaza, Hamas does not build bomb shelters, but rather takes its own citizens hostage and uses them as "human shields." This refers to the deliberate placement of civilians in harm's way in order to prevent a strike on a particular target.

The Israel Defense Forces (IDF) is currently using leaflets and phone calls to warn Gaza's civilians to evacuate buildings prior to airstrikes on Hamas terrorists. Israel used the same approach during its 2008-9 and 2012 operations in Gaza.

Mahfouz Kadariti, a father of five in the Palestinian coastal enclave, confirmed that Israel tells Gazans to leave their homes before an offensive. But he claimed that in some instances, as many as 50-60 family members live in one home, and that the time allotted to leave is not enough.

Gaza resident Joe Carton said, "The first concern for all of us here is staying alive."

Yet the Hamas Interior Ministry on Sunday urged Gaza residents to ignore the IDF's pre-airstrike warnings, saying in a statement, "To all of our people who have evacuated their homes-return to them immediately and do not leave the house," Ynet reported.

Indeed, Israelis understand that while their government goes to great lengths to protect them, the same cannot be said about the leadership in Gaza.

"In Israel, we have the full support of the entire nation of Israel, we have psychologists, and shelters, and [the] Iron Dome. ... While the IDF is doing everything in its power not to harm innocent people, I know Hamas is trying to use those innocent people so the IDF will hit them," Nissim told JNS.org. "I pity them."

"I am also worried for them," she said. "They should be building shelters there. Where is their government?" 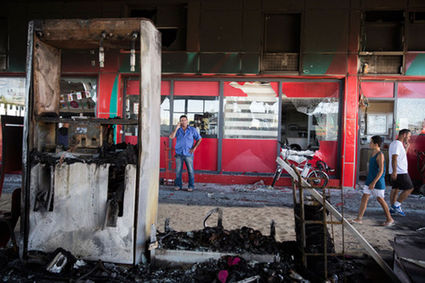 The scene of a gas station in Ashdod that was hit directly by rocket fire from Gaza on the fourth day of Operation Protective Edge, July 11, 2014. The rocket caused explosions and three people were injured, one of them critically.

Israeli research, meanwhile, sheds light on the longterm effects of the conflict with the Palestinians. Clinical/community psychologist Golan Shahar of BGU, working with Georgia State University's Dr. Christopher C. Henrich, followed 362 adolescents from southern Israel between 2008 and 2011. Four times per year, they measured the adolescents' exposure to rocket attacks and their levels of anxiety, depression, aggression, and violence. Longitudinal results evinced modest effects of rocket exposure on anxiety and depression, and no effects on aggression, but robust effects on violence commission.

"I am not talking pushing and shoving, I am talking carrying weapons, carrying knives," said Shahar, explaining the increased violent tendencies produced by subjects of the study.

On the Palestinian side, Shahar said, there is "no reason to expect the kids in Gaza are not becoming more violent from what they have to endure."

"Unless this conflict is contained, unless it is resolved, the worst is yet to come," he said.