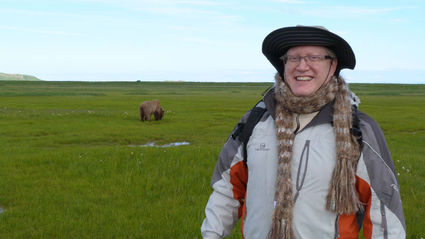 Donn Ungar, who is making aliyah, posing in in Alaska with a grizzly bear in the background.

(JTA)-Rebecca Scoggin lived in a lot of places growing up: Juneau, Nome, Fairbanks, Homer, Anchorage. But except for the two years she lived in Seattle after high school, she never lived outside Alaska.

At least she hadn't until a few months ago. Inspired by a Birthright trip she took at age 19, Scoggin decided to pick up and move to Tel Aviv.

"It was kind of a random decision. There was no real reason for it," Scoggin, 23, told JTA in a recent phone interview from Anchorage, where she was back visiting family. "I fell in love with Tel Aviv and sun. It's become more home to me than any other place."

Scoggin is not your typical immigrant to Israel, and not just because she hails from the 49th state. Scoggin has no family in the Holy Land, hasn't had much Judaism in her life and has a Christian father. But something drew her to Israel.

"I'm not religious, I grew up celebrating Christmas my whole life, but I do feel that connection to my land," she said. "I don't know if it's my Jewishness or if I just like the heat."

Scoggin is one of several Jews from Alaska immigrating to Israel this year. Among the others making aliyah are a 51-year-old CT scan-MRI technician who wants to get away from the ice; a 51-year-old expert on refugee resettlement who is relocating with her son and Scottish husband; and a 58-year-old former corrections officer and deputy sheriff from Anchorage.

"It's not every day that we are privileged to take care of new olim from Alaska," said Erez Halfon, vice chairman of Nefesh B'Nefesh, the organization used by the Israeli government  to handle the logistics of U.S. immigration to Israel. "It's astounding and inspiring to me that Jews living in a kind of paradise, with a comfortable and luxurious life, are deciding to leave home, work, community and friends to move to the other side of the world-especially these days when Israel is under fire."

The technician, Donn Ungar, whose aliyah flight left from New York on Monday, says he's not nervous about going to Israel despite the rocket fire from Gaza.

"It's crazy over there now, but it doesn't change my decision at all," Ungar said. "It's not a reason not to go there. I know they have wars. I'm going to be a part of Israel and a part of the community. You can't pick and choose."

Karen Ferguson, director of the refugee program at Catholic Social Services in Anchorage, where she works with refugees from Iraq, Somalia, Sudan, Bhutan and Burma, has a similar take. She will be moving to Haifa in August with her 13-year-old son, to be followed in December by her husband, Stewart.

"I don't think you can pick a time and hope that will be a time of peaceful tranquility in Israel and say that's when you're going to move," Ferguson said. "This is the reality of Israel. We're going there to immigrate and be part of the country. You have to take the country for all it is-the good and the bad."

Ferguson's move will be the latest stop in a lifetime marked, she says, by "a desire for change and adventure."

After meeting her Scottish, non-Jewish husband in Ohio and marrying in Nova Scotia, Canada, the couple soon moved to the Pacific island nation of Samoa, where their daughter was born. When they moved to Anchorage 17 years ago, they planned to stay just a year or two.

But with good jobs, young kids and a fondness for catching their own wild salmon, they decided to stay put for a while.

Every year the family catches up to 55 pounds of salmon (their legal limit) using dipnet fishing: Stewart affixes a large, circular net to the end of a long pole, then dips it into the ocean where the salmon swim into an inlet. Karen chops off the heads, guts the fish and takes the meat to a facility that turns it into lox and smoked salmon and filets. The family hasn't had to buy salmon in 15 years, Ferguson says.

But now they're ready to say "So long, and thanks for all the fish." With their daughter off to college and their son about to start high school, they're set for a new phase in their lives.

"We're in this window of opportunity now," Ferguson said. "We could continue doing what we're doing or try and do something different. My husband and I decided we really wanted to take on new horizons."

"I haven't quite figured out how to articulate it. It's a place I would love to have lived in and been a part of," said Ferguson, who has raised her children as Jews, though her husband has not converted.

"There's just something about Israel that is both dynamic and magnetic. The intellectual and historical experiences when I'm there are very challenging. And for me, I grew up never being around very many Jews. We were a very secular Jewish family. I went to an Episcopalian boarding school. I work for Catholic Social Services. There's something really appealing for once about being among my own and having the holidays be the Jewish holidays."

Unlike many immigrants, Ferguson says she's not necessarily thinking about Israel as a final destination. She will be starting a master's program in peace and conflict management at Haifa University; her husband will telecommute to his job doing telemedicine for small, rural communities around Alaska.

"We're going to Israel looking for a connection and a place to be our next home," she said. "You really can't predict well whether a place you stay for a while will become your home. Things unfold for you."

That was how Ungar ended up spending 17 years in Alaska. He decided to move there after falling in love with it while on vacation from Florida, found work quickly and made good friends. But after a brutally cold winter three years ago that never seemed to end, Ungar, who is single, began thinking about an early retirement destination. He wanted someplace simple and inexpensive.

But Israel, where his family unsuccessfully tried living for a few months in 1971 and where Ungar now has a brother and other relatives, kept popping into his head. Ungar went there on a three-week vacation in February and was smitten.

"The energy just felt amazing," he said. "That's what brought me to Alaska in the first place-the feeling that this is where I should be at that point in my life. Now I was feeling that for Israel. I've learned to listen to that little voice in my head."

So he contacted aliyah authorities, packed up and got rid of his most prized Alaska possession: a fur bomber jacket. It was the warmest thing he ever owned.