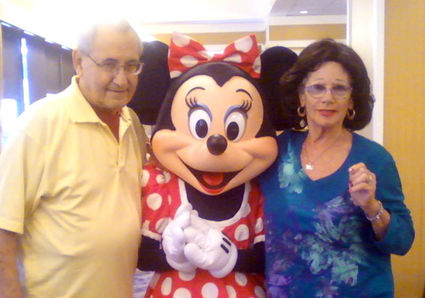 Okay, I'll finish the sentence! We went from passionate lovers to angry roommates! Of course I refer to my spouse and myself as we get ready to celebrate our 54th wedding anniversary on Sunday, Aug. 3. Irv says "That date will go down in infamy."

(Only kidding, of course. The spark is still there... only now it seems more like heartburn than a smoldering fire!)

We actually started celebrating this fabulous event several days ago with a visit to Disney. We "hung out" with Minnie Mouse, which bothered me because I have a tough time handling competition now that I'm older and she is beautiful and young.

Actually, I had no need to worry because Minnie Mouse isn't Jewish! (Irv was upset with me when we first met because I wasn't Sephardic!)

We met 55 years ago back in New York City. I was a breathless beauty back then. Irv said "so breathless he choked!"

We both lived in Brooklyn but worked in Manhattan. I thought Irv was much too young for me. I didn't know he was a few years older, just back from the war in Korea and schooling on the G.I. Bill. But Iearned eventually and we dated and fell in love.

The rest is history... three terrific sons, wonderful daughters-in-law, and beautiful grandchildren later, we are still together. Happy anniversary to us!

As you read this column, I sincerely hope the fighting between Israel and Gaza is resolved... and to Israel's satisfaction.

I recently received an email from NANCY LUDIN, executive director of the Jewish Pavilion. She wrote the following: My cousin in Israel is the daughter of Ernest Michel who was the UJA Exec in New York City for many years. She wrote to me about her son Gil and shared a poignant story written by one of her friends. "This is the war of Gil's peers, she said. All of them signed on for an additional year, and all of them are in the thick of things." Here is an excerpt. It begins with the heading "Which will come first: A siren, Gaza invasion, or my first grandchild?"

"When my children were born," AMY LEVINSON. a member of the Haaretz English editorial staff writes, "I allowed myself to think that by the time they grew up, all the fighting would be over. Surreal. There is no other way to describe it. I am waiting in the delivery ward, down the hall from the room where my daughter is about to give birth to our first grandchild. I am waiting for the happiest, the best of all possible news, while the country is becoming more embroiled by the moment in a military operation in the Gaza Strip that threatens to spiral into chaos, paralyzing our lives, stopping our hearts, causing untold damage, injury and death.

My sons, the uncles of this as-yet-unborn child, are both Israel Defense Forces officers. They are not with us in the waiting room here, as we'd hoped. They will not share in the exquisite euphoria we will undoubtedly experience in those precious moments after the birth.

The two of them, one in the regular army and one in reserves, have been called down south, along with tens of thousands of their comrades-in-arms in advance of a possible incursion of ground forces.

At this particularly poignant juncture, I also recall the long-standing, familiar Israeli mantra whereby we - along with all Israeli mothers and fathers - deluded ourselves into thinking and declaring, upon the birth of our sons, that by the time they grew up and turned 18, there would be peace, there would no longer be a need for them to fight.

Now, above me on the muted waiting-room television, the latest headlines and images flash - warning sirens sounding simultaneously in four Israeli locales, death and destruction after an aerial attack on Gaza. My throat constricts. Tears well up. Where are my sons?, I wonder. A phone call from my son-in-law, summoning us to the delivery room. We rush in, hearts pounding. 'Do you see her?' my daughter asks, eyes glistening. 'She's perfect.'

(May the fighting in Israel be ended, if not now, then soon, and may the IDF forces return safely to their loved ones. As a mother of sons who went to battle in the Persian Gulf and Iraq, I know the anguish Amy is feeling. May her new grandchild bring her much joy!)

I realize how hard it is to think of fun and excitement when our beloved Israel is going through hard times, but life goes on. Sunday afternoon, Sept. 7th, is the date we are asked to save. The COS Seniors of Congregation Ohev Shalom is coming back for the new season (its 24th year) with a very special show, indeed. It is FREE and everyone is invited! All members of the congregation and their friends are welcome!

The show takes place in the Ballroom of Congregation Ohev Shalom, 613 Concourse Parkway south, Maitland, and it is being billed as "the most amazing , fantastic performance PLUS an ice cream social! (Yum... I sound like a Red Robin commercial!)

The truly talented MARK STONE is the star. His show is the funniest mind reading and E.S.P. show in America today. Mark never fails to astound audience members with his ability to read minds, make predictions, and "see" with his fingertips while blindfolded. He leaves audiences shaking their heads in disbelief when he demonstrates super memory, clairvoyance, and telekinesis. Not only does Mark amaze everyone with his uncanny abilities, he keeps audiences laughing throughout the show. It's a fun and thought provoking entertainment experience. (Mark better not tell my age!)

The show begins at 2 p.m. but folks are urged to arrive early as they will be able to accommodate only 200 people.

No reminders needed for this one...

The International Round Table (IRT), run by our own wonderful RACHEL and JIM SHIPLEY, meets every month with very interesting and informative guest speakers. The Shipley's remind us that Orlando remains the No.1 tourist destination in the world and we could never be close to that without the Orlando International Airport. They said, "Those of us who have been here long enough, have watched it grow from a small southern airport to a gigantic internationally recognized site with a design that has become the standard." (Irv and I have been living in Central Florida for 50 years. The Shipley's are right on!)

At the August IRT, FRANK KRUPPENBACHER, chairman of the Orlando Aviation Authority, will be the guest. He will give the stats on the impact that the airport has on our lives and our livelihood. What has the OAA planned for the future? What about rail to and from the airport and to where?

The meeting takes place on Thursday, Aug. 7th, 11:30 a.m. at the University Club, 150 East Central Ave (corner of Rosalind, across from the library.) There is free parking next to the club but space is limited in which case there is a public parking garage a few doors west of the club.

The cost for the IRT is $30. The Web Master is BOB GREGOR, head of Circle Tree, a web development and marketing company. The new site is now active to pay by credit card or PayPal. No credit cards are accepted at the meeting itself, just cash or check. BRION PRICE is the long time photographer. To get your photos, just ask him for his card at the IRT and he will take care of it.

The Shipley's would appreciate an e-mail or phone call confirming your attendance. Their e-mail is tradingwise@cfl.rr.com. Call them at 407-222-5723. If you have a friend or business associate who might be interested in the IRT, bring them along. Just let the Shipley's know so they can put them on the attendee list. If you make a reservation and find you cannot attend, please let them know as they order lunch for you unless you tell them otherwise.

A summer outing on a lake or the ocean can be a lot of fun with your dog along but be sure to outfit your dog with a life jacket (just as you would your children) in case of an emergency.

Harry, a kosher butcher, is in his kitchen reading the latest edition of "The Chicken Gazette." His wife Ethel is next to him doing her nails. Suddenly a headline catches his eye: "THE COST OF REARING KOSHER CHICKENS FOR THE TABLE WILL SOON FALL DRAMATICALLY." He reads on: "Israeli scientists have recently discovered that if you place rose-colored contact lenses over chicken's eyes, not only will they lay more and eat less, but also there is a reduction in henpecking."

Harry can't help but read out loud the article to Ethel, adding "Isn't that interesting, darling? I bet you as soon as word of this discovery starts to circulate, a pair of rose-colored spectacles will be the most popular gift husbands buy their wives."

(Note: You'll be pleased to learn that Harry's facial bruising and bashed in head are at last beginning to heal.) 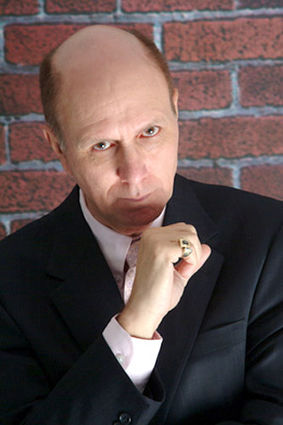