Sneakers on Tisha B'Av: when spirit and letter collide 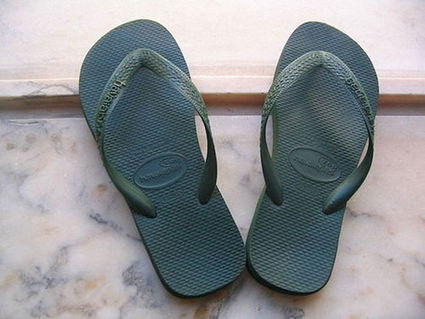 Flip-flops (pictured) are a popular footwear choice on the Jewish fast days of Tisha B'Av and Yom Kippur due to an injunction against wearing leather shoes.

The wider world of traditional Judaism is moving in fits and starts toward a renegotiation of the terms of halakhic observance. At question is the importance of social change in the understanding and application of the legal logic of the sages of old. In the last several years, voices from within the Orthodox fold have raised a formidable challenge to certain established norms of Jewish life and law, especially regarding the possibilities of female religious leadership.

Though not as emotionally charged, there are many other points of striking dissonance between codified law and modern reality that dot the landscape of Jewish observance. One that has caused something of a stir lately is the ban on legumes and rice for Ashkenazi Jews on Passover, a rule that everyone seems to know and bemoan as an artifact of early-modern grain storage techniques. Another, which appears to have escaped popular scrutiny so far, is the injunction against wearing leather shoes on the fast days of Tisha B'Av and Yom Kippur-though the reason for the disparity in critical interest should not be hard to comprehend.

Rabbinic law from the Talmud delineates five prohibitions that apply equally on Tisha B'Av, the day of greatest tragedy, and Yom Kippur, the day of gravest repentance. These are: eating/drinking, marital relations, applying cosmetics, bathing, and wearing leather shoes. The intention is to create an experience of uncomfortable abstinence, in one case as a sign of mourning, and in the other as a method of self-purification. And yet for the observant Jew living in the age of Nike, the prohibition against leather shoes has only meant that twice a year, every year, on the two most solemn days of the year, we were allowed to wear our most comfortable shoes to synagogue. True, not everyone came in gel-soled basketball shoes. Many opted for funky rubber flip-flops with socks, or the ubiquitous white Keds.

It isn't as though the irony of the situation is totally lost on modern Jews. I recall my elementary school teachers taking the time to explain the reasoning behind the prohibition as that leather shoes were once the most comfortable kind of footwear, back when these rules were first being written. Implicit in the inclusion of this clarifying detail was an acknowledgment that we are now living in the absolute reverse situation: that at this point in history, the leather shoe epitomizes podiatric discomfort. Traditional halakha, as it often does, stands firmly planted in an older order of things, in this case collapsing upon itself in a way that precludes any of its original meaningfulness.

That the prohibition against leather shoes is really a prohibition against comfort-rather than stemming from some ritual problem with leather itself-is demonstrated meticulously by Dr. Ari Zivotofsky of Bar-Ilan University in an article featured in Jewish Action magazine in 2011 (http://www.ou.org/jewish_action/09/2013/whats_the_truth_about-fasting_and_wearing_leather_on_yom_kippur/). Zivotofsky cites a wealth of legal writings beginning with the Talmud that address the problem of what type of shoe ought to be worn on Tisha B'Av and Yom Kippur. The masters of the Talmud variously sported shoes of bamboo, reeds or palm branches, or wrapped simple pieces of cloth around their feet. Maimonides advised that whatever shoes are chosen should be flimsy enough so that the wearer feels virtually barefooted as they walk. In a similar vein, the Ba'al HaMaor, a contemporary of Maimonides, includes within the category of prohibition any shoe that is especially protective of the feet. 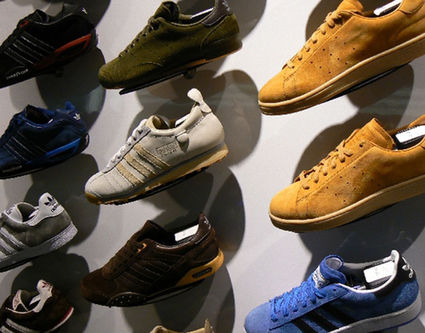 Although many Jewish communities continue to "sidestep" the sneaker contradiction, some contemporary authorities have issued rulings intended to rescue the spirit of the law. Zivotofsky notes the opinion of Rabbi Yaakov Ariel of Ramat Gan, Israel, who adds to the prohibited list any non-leather shoe that one would commonly choose to wear day in and day out for their comfort, i.e. sneakers and other leisure footwear. Other legalists such as Rabbi Chaim Kanievsky and Rabbi Moshe Sternbuch uphold the "protectiveness" approach, expanding the prohibition to any material construction that functions as well as leather.

On the other side, Rabbi Shlomo Zalman Auerbach manages to resolve the problem more leniently, asserting that all modern people fall under the Talmudic category of istinis, roughly meaning "persnickety." In Rabbi Auerbach's view, given our very low tolerance for physical discomfort, banning comfortable non-leather shoes on Tisha B'Av and Yom Kippur would be tantamount to unnecessary cruelty.

Wishing all a mindful and meaningful fast this Tisha B'Av, and remember: don't judge another man's shoes until you've walked a mile in them.

Binyamin Kagedan has an MA in Jewish Thought from the Jewish Theological Seminary of America. He can be reached at bkagedan@gmail.com.

I consider myself a traditionalist,, however, I think it is important to remain relevant to the times. This article was a eye opener to how we lose purposeful observance and merely follow tradition. I vote for the spirit of the law because that is what best encompasses the purpose of the law.