By Alan Kornman and Wallace Bruschweiler

Who wants to destroy who? 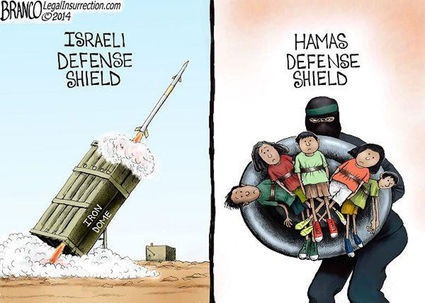 Roi Kais of Ynetnews.com reported "Hamas Interior Ministry tells Gaza locals to stay in their homes despite Israeli phone calls, leaflets, and the 'knock on the roof' procedure urging them to evacuate."

The "knock on the roof procedure" is when the Israeli Air Force fires a small round at the roof of a targeted structure signaling residents to evacuate before the real strike.

Hamas Interior Ministry, on the other hand, issued commands for the residents of Gaza to remain in their homes despite Israeli messages to evacuate. Arutz Sheva reported "The Hamas-run Palestinian Authority Interior Ministry told Gaza residents the Israeli messages 'are designed to weaken our resolve and to sow panic and fear among us, in light of the failures of our enemies. We call on Gaza residents not to pay attention to these messages and not to leave their homes.'"

In other words, those who decide to flee their homes when Israel gives them the chance to do so, could be labeled as traitors and therefore face a fate far worse than Israeli bombs. Hamas terrorists have learned that sacrificing their own Palestinian people and marketing their corpses to the world media represents an effective public relations tool.

We have all seen the pictures of Palestinians parading the bloody corpses of women and children in front of the international press, who then predictably report the carnage as Israeli barbarism against civilians. What is rarely reported though are Israel's repeated efforts warning civilians to leave the targeted area prior to an attack.

Jihad made simple to understand

For those of us in the West, the calculated sacrifice of civilians is instinctively repulsive and morally reprehensible.

Comprehending the concept of Jihad is essential to understand why our 'western values' are not compatible with Islamic Law.

Islamic law as written in "Reliance Of The Traveller" states, "Jihad is personally obligatory for everyone able to perform it, male or female, old or young, when the enemy has surrounded the Muslims. For non-Muslim forces entering Muslim lands is a weighty matter that cannot be ignored, but must be with effort and struggle to repel them by every possible means."

"Every possible means" validates the use of Palestinian human shields in Islamic doctrine and theology.

Palestinian Media Watch reported "In a striking talk on Hamas TV, spokesman Sami Abu Zuhri belittled the Palestinians who are counting the 'number of Martyrs,' calling them 'defeatists.' He argued that those 'defeatists' should consider the current situation in light of the history of Algeria, which he said lost 45,000 people in one day in 1945. He then made a slip of the tongue in speaking about the population in Gaza: 'We are leading them to death,' he said, then quickly corrected himself: 'I mean, to confrontation.'"

They goad people into fighting, terrorism, and violence, under the pretext of "Jihad," while they themselves sit at a hotel, a swimming pool, or a nudist beach, eating a variety of dishes, marrying four wives, and driving the latest model luxury cars. What is this? What kind of men are you?

You know where the border between Israel and Palestine is. If there is a real man among you, I am willing to drive him in my own car and at my own expense to the Gaza border. I will drop him there and say: "Go. May Allah be with you. Gaza is there. Jihad awaits you. Go in and show us you're a real man."

These Hamas leaders are quick to kill their own women and children in the name of Allah, but are cowards fighting their Jihad from luxury hotels outside of Gaza. This is the nature of Hamas and they bring shame on their families, tribes, and Allah.

The night the lights went out in Gaza

In a strange case of irony a Hamas rocket landed in Kissufim and knocked out power to 70,000 Gazans in Khan Younis and Dir Elbalach. How sad for the Palestinians in Gaza that Hamas can't produce their own electricity and have to rely on Israel for one of their most basic needs.

Even a child knows that if Israel stopped providing the Gaza Strip with water and electricity it would be a non-lethal incentive prompting the people of Gaza to demand Hamas to stop firing rockets at Israel. Israel Prime Minister Bibi Netanyahu killed the idea saying the lawyers won't permit it.

Thanks to Hamas ineptness, they knocked out their only electricity source and did what Netanyahu refused to do for humanitarian reasons. Meanwhile, Israel is still sending 10-15 trucks daily with food and medicine into Gaza despite rocket attacks. A few days later Israel did the necessary repairs and turned the electricity back on in Gaza.

Former 'Al-Quds Al-Arabi' editor Abd Al-Bari Atwan: The Arab leaders are praying that Israel will get rid of the Palestinians once and for all.

Following are excerpts from an interview with Atwan, which aired on Mayadeen TV on July 14, 2014:

The vast majority of the countries participating in [the Arab League] summit consider Hamas to be a terrorist organization. These countries pray-all those foreign ministers are praying-that Israel will manage to get rid of Hamas once and for all. They support the Israeli planes bombing the Gaza Strip under the pretext of getting rid of Hamas and stopping the missiles.

Is it conceivable that such an 'urgent' meeting is convened only 7-8 days after the Israeli air raids on the Gaza Strip began? Why did it take them so long? The reason was that they wanted to give the Israeli planes and tanks the opportunity to invade Gaza and destroy the resistance. There are 18 resistance movements in Gaza. It's not only Hamas.

They took their time to allow Israel to destroy the resistance once and for all. This meeting was summoned by Kuwait. Why didn't Palestinian President Mahmoud Abbas summon it, and from day one? The reason is that he does not want the Arabs to convene. He does not want them to decide that this aggression must be stopped.

Yitzhak Rabin once said that he hoped to wake up one day and see Gaza had sunk into the sea. By God, the Arab regimes and leaders have outdone Rabin in this. They would like the West Bank, the Gaza Strip, and the entire Palestinian people to sink into the sea with no survivors.