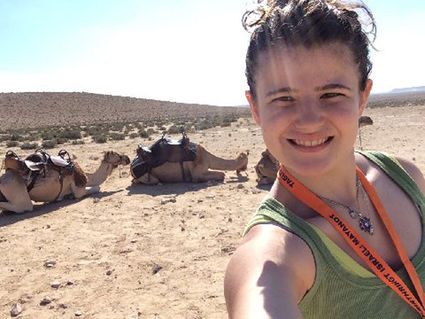 Elana Goldstein, with camels in the background, loved her trip to Israel in the midst of Operation Protective Edge.

Oviedo resident and member of Congregation Ohev Shalom Elana Goldstein was all excited when she found out last May that she would be going to Israel through the Taglit-Birthright program. She'd wanted to go ever since her dad, David, told her about the trip when she was a little girl.

"He went to Israel when he was 18 and lived on a kibbutz for 6 months," she told Heritage.

Taglit-Birthright, partially funded by the Israeli government, provides free 10-day trips to Israel for any Jewish adult between the ages of 18 and 26. So, Elana who was 18, and had just graduated third in her class at Oviedo High School, applied online at Birthrightisrael.com.

"It appeared to be the largest trip organizer of the Birthright trips," she said.

Her acceptance into the program came almost a month before the three young Israelis were kidnapped. The trip was scheduled for July 7-17. When the young men's bodies were found, her mother, Simone, told her it was alright if she wanted to cancel the trip.

"We knew the three Israeli teens were tragically killed and a Palestinian teen was tragically killed. I remember telling Elana she could cancel the trip, but she did not want to. Also, I did not foresee a war and did not feel compelled to cancel her trip before she left," Simone said.

Elana was gung ho to go. "I trusted that the IDF and Mayanaot would take excellent care of our safety, so I went anyway," she said.

Her group of 39 arrived in Tel Aviv the afternoon of July 8-the day Operation Protective Edge began.

From the airport, the group went to the Caesarian aqueducts and then stayed in a hotel in Tiberias-far away from Gaza.

With the Iron Dome missiles intercepting rockets fired by Hamas into the heart of Israel, how were the Israelis around her acting?

"The Israelis were calm and normal," she said. "They acted like this was just something they experienced in everyday life. They gave us no reason to be alarmed or scared."

Simone, who has not been to Israel, wasn't so calm.

"I tried to keep very busy and distracted with work, activities and personal life," she said. "In the beginning, when the rocket war started, my family and others, having been to Israel, tried to alleviate my fears by telling me it is safe, with great security. I was not relaxed but learned to live with it."

Through the Mayanot program, Simone and David received regular e-mail updates about the group and Elana maintained contact with her parents by instant messaging them on Facebook.

"I knew there was a seven hour time difference, so if I was on the computer at 1 a.m., it was 8 a.m. in Israel, a good time to hear back from Elana," Simone said.

Elana heard her first siren warning in Jerusalem while the group was having a picnic just outside the five-star hotel where they were staying. "We ran to a nearby bomb shelter in the hotel and it had a bunch of kid games to keep all of the children calm."

The group was supposed to go to Tel Aviv, but because so many rockets were hitting near there they went to Eilat instead, where it was thought they'd be far from the rockets.

Arriving about 8 p.m., many in the group visited a bar near the hotel. They walked back to their hotel around midnight. About an hour later, a siren wailed out. Elana was in one of the hotel rooms visiting with some of the group.

"We immediately ran out of the hotel room to the staircases for safety. As we were running, we heard a loud boom and we knew instantly that the rocket had hit really close to our hotel."

In fact, the rocket hit a hotel just two blocks away from where they were staying.

"After the rocket hit too close to her hotel in Eilat, which was supposed to be a safe area, I was no longer calmly distracted," said Simone. "My son initially got a text from Elana that a bomb hit nearby. The night before things seemed calm and Elana was already talking about studying abroad in Israel next summer. The next night we were on a skype and it was a different scenario hearing the other kids were hysterical while talking to Elana at 4 in the morning her time. I was hysterical, crying, but trying to stay composed at the same time with her."

Simone went on to say that her mother, a former participant in the high school in Israel program as a teacher, had at first reassured her that Elana would be safe, but after the rocket hit so close in Eilat, she was distressed too.

However, Elana stayed calm and was a comfort to the others, later earning her the "Calm Award" at the end of the trip.

Back here, Simone was constantly on pins and needles. After the rocket hit from an unexpected place, the Birthright Israeli contacts told her to call every day, "as much as I needed to for reassurance," Simone said.

"The Birthright is an outstanding program," Simone added. "I believe they really make security and safety of the teens a priority."

Elana experienced running for safety from fired rockets one more time. The group was visiting a Bedouin tent in the Negev. There was no siren because they were in the middle of the desert, but they were told to run for safety behind metal walls in front of the bathrooms.

Even in this unusual situation Elana felt safe.

"I honestly felt very protected while I was in Israel and completely trusted the IDF and the Iron Dome. To me, Israel felt just as safe as the United States," she said.

Seven IDF soldiers accompanied the group for five days of the trip. "They stayed in our hotel rooms and interacted with us during all the daily activities," Elana said. "They were silly, normal, friendly 20-year-olds. We even went shopping at the mall with them. They did not fit the tough soldier stereotype at all!"

"In spite of having to go into bomb shelters during the trip, Elana really had a fun, tremendous, and mostly life-altering experience in a positive sense," her mom said. "Not only did Elana come back feeling a stronger Jewish identity because the Jewish experiences there were very different than in the United States, but she met many wonderful people and she really enjoyed the activities. Mostly, she enjoyed the physically active focus of the trip in hiking through beautiful scenery, doing activities never before like riding camels, and the religiously moving moments when she got emotional touching the Wailing Wall," Simone said.

The 10-day trip to Israel changed Elana's life and she will always be an advocate and "protector" of her homeland. "I definitely feel more connected to my Jewish roots because I actually experienced the historic sites I learned about in Hebrew school instead of just reading about them like before. I am more motivated to get involved with the Jewish life on my college campus."

Her brother, Sam, 16, wants to go to Israel through the Birthright program some day after high school or in between college.

"I hope our timing will be better," Simone said candidly. "We want to send him to Israel when there is not the risk of a war like the situation was for Elana."

And what about Simone going to Israel one day?

"Someday, I hope to get up the nerve and go to Israel in better times. My daughter's trip has influenced me to want to go to Israel when it is safer. When I was Elana's age, I did not have a desire to travel to Israel. It was Elana who initiated the trip with her desire to go, the time to go before starting college at UF in Gainesville, and she planned and signed up for the trip all on her own.

"I feel like I travelled to Israel on the Internet while Elana was there. The Mayanot program sent regular updates and lots of group pictures with breathtaking scenery. Elana's new friends from the program were posting lots of pictures on Facebook. I got a real sense of the beauty, emotional, and religious love of Israel through the many pictures I enjoyed. Like I was told by relatives and my mother who have visited Israel, and my communications with Israel, I could feel the protective sense of the Israeli people over their American visitors and own citizens. Through my daughter Elana's experiences, it heightened my interest to travel to Israel one day and see the beauty for myself. My daughter came back encouraging me to go to Israel."