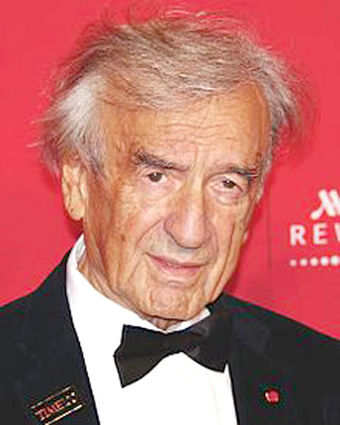 ELIEZER "ELIE" WIESEL, is a Romanian born Jewish American professor and political activist. He is the author of 57 books, including "Night," a work based on his experiences as a prisoner in the Auschwitz, Buna, and Buchenwald concentration camps.

A Nobel Peace Laureate, Wiesel has accused the militant Palestinian movement Hamas of child sacrifice for its practice of launching rockets against Israel from within heavily populated parts of Gaza during the recent conflict. In a full page, paid advertisement in Toronto, Canada's The Globe and Mail newspaper, he argues that Jews rejected the practice of child sacrifice.

A similar ad has appeared in major United States newspapers, but a British version is causing controversy, with the London Times refusing to publish it. (I wonder who could be putting "pressure" on the London newspaper?)

When asked about the situation, Israeli Prime Minister, BENJAMIN NETANYAHU said, "Every civilian casualty is a tragedy, a tragedy of Hamas' own making." Netanyahu blames Hamas for embedding its fighters among civilians in residential areas.

"Israel," he said, acted to protect the citizens from thousands of rockets fired from Gaza and from attacks by "death squads," he said, "through tunnels running under the border into Israel."

(We also know that Israel gave warning to Palestinian civilians before returning fire. But will the United Nations acknowledge that or are they also under "pressure" not to?)

Prime Minister of Israel, Netanyahu, made this speech to the Knesset recently. I think it is one of the best I've ever read. Here it is in part:

"To Ismail Haniya, and the leaders and operatives of Hamas: We, the people of Israel, owe you a huge debt of gratitude. You have succeeded where we have failed. Because never before, in the history of the modern State of Israel, has the Jewish people been so united, like one person with one heart.

You stole three of our most precious children, and slaughtered them in cold blood. But before we could discover the horrible truth, we had 18 days of pain and anxiety while we searched for them, during which our nation united as never before, in prayer, in hopes, in mutual support. And now, as you continue to launch deadly missiles indiscriminately, intended to maim and murder as many civilians as possible, while you take cowardly refuge behind your own civilians - you continue to inspire us to hold strongly onto our newly discovered unity. Whatever disputes we Jews may have with each other, we now know that we have one common goal: we will defeat you."

Welcome to the Jewish Pavilion...

This is directly from the latest Jewish Pavilion bulletin:

"The Jewish Pavilion is thrilled to welcome our new office manager, SUSAN SPARROW. Susan previously served as an administrative assistant at Congregation Ohev Shalom (COS). She is competent and personable and has a special passion for seniors."

Sadly, last week my spouse and I attended the funeral service of a much beloved member of our community, Eddie Halpern. There was quite a turn-out for Eddie, as he was so very special... so funny... so well liked. And, of course, so is his widow, LISETTE HALPERN.

We have known the Halpern family for almost half a century here in Central Florida. The devastating loss, combined with the extremely hot day and leaving my home without eating breakfast, proved too much for me and I fainted. Luckily, those attending (especially members of the Halpern family) were on the ball and phoned 911 for me. I am okay, and thank you for all the well-wishers who phoned with their concerns. I saw so many folks in attendance that I hadn't seen in years. One in particular, SANDI SOLOMON, is running again for a third term to be Casselberry commissioner.

Sandi has served the citizens of Casselberry for the past eight years. During that time Casselberry has come a long way, 2500 trees planted, new sidewalks, resurfaced roads, major music and art events, bike and walking trails, and two new parks.

Sandi hopes to be re-elected for three new projects she is working on - bringing Seminole State Center for the Arts to Casselberry, a new

City Center adjacent to City Hall, and making sure the City buys the Casselberry golf course. (I must move to Casselberry so I can vote in their election on Aug. 26!)

Attention jazz lovers... and all lovers of good music:

Don't forget that on Sunday, Aug. 31, there will be a special concert at the Altamonte Chapel featuring CHRIS ROTTMAYER on piano; CHUCK ARCHARD on bass; KEITH WILSON on drums and special guests, JOHN DEPOLA on trumpet and DAN JORDAN on sax.

The music starts at 12:30 p.m. and is emceed by our own wonderful ALAN ROCK of WUCF fame. It ends at 2:30 p.m. and the second set is always a sit-in welcome for all professional musicians and vocalists. 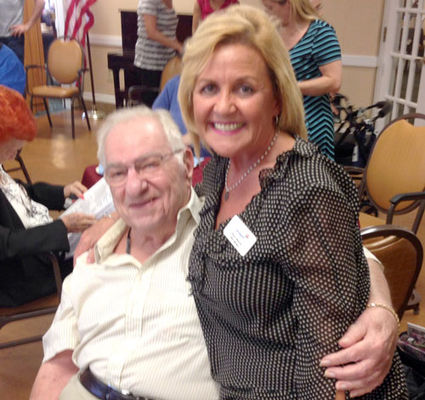 Berny Raff at COS and Susan Sparrow

For our recent 54th wedding anniversary (Irv's and mine), one of our sons arranged a special "romantic" night out with a candlelit dinner at Pannullo's Restaurant overlooking the beautiful park on Park Avenue in downtown Winter Park. The food was great as was the service... I don't know about the "romantic" part as we are married for 54 years! (He's old too!) The beautiful restaurant is run by RICHARD PANNULLO and our very own MICHAEL SCHWARTZ.

Three senior citizens, Sarah, Becky and Estelle, are sitting on a park bench near Lake Eola having a quiet conversation about bargains and such, when a flasher approaches.

He walks up to the bench, stands right in front of them and all of a sudden, with a loud shout "AHA," he opens his raincoat to reveal his naked body.