Will Larry David's Broadway show add to his Jewish file? 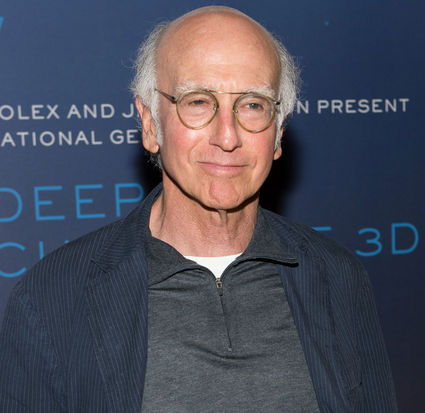 Larry David says his Broadway debut will take a comical look at a death in the family.

NEW YORK (JTA)-In Larry David's fake real-life world on the HBO sitcom "Curb Your Enthusiasm," he is tapped by Mel Brooks to take over the Zero Mostel-Nathan Lane role of Max Bialystock in the megahit Broadway adaptation of "The Producers."

Just as Max and accountant Leo Bloom set out to make money by producing a surefire bomb, Brooks picks Larry with the (secret) goal of killing the Tony Award-winning musical and getting his life back. But in an art-imitates-art twist, Larry (like "Springtime for Hitler") miraculously becomes a hit.

Now comes news that the real real-life Larry David is set to make his Broadway debut in 2015 with a play titled "Fish in the Dark." David wrote the script and will star in the show.

David isn't saying much about the details except that it is a comedy about a death in the family. Before the official announcement, the buzz was that the show would be called "Shiva."

So odds are good that David will be adding to his already sizable Jewish canon.

OK, he's not Philip Roth. But who is? Few in showbiz have tackled as many Jewish topics with as much attitude and as prominently as David has on "Curb" and as the co-creator/lead writer of "Seinfeld."

It was fitting that in 2004, David dedicated the entire fourth season of "Curb" to the Larry-gets-cast-in-"The Producers" plot line. Few have followed as boldly in Brooks' footsteps as David when it comes to turning the Holocaust into a punch line. In fact, you could argue that David has attempted a far more daring (some would say offensive) maneuver-whereas Brooks deployed comedy as a weapon against Hitler, David has taken aim at the hallowed status of survivors and Holocaust memorialization.

First came the "Seinfeld" episode ("The Raincoats") when Jerry is caught making out with his girlfriend during a screening of "Schindler's List." As it turns out, the roots of the gag were actually the doldrums of synagogue.

"I think it must have come from sitting in temple," David said several years ago in an interview packaged with the release of the series on DVD. "I would sit in temple wondering what would happen if I reached over and touched my wife's breast now or something like that. I can't pay attention; my mind wanders."

Count Jerry Stiller, fictional father of George Costanza on "Seinfeld," among those who was a little squeamish about the bit.

"I just felt that they had gone over the line with that one," Stiller, who is Jewish, once commented about the episode. But he quickly added with a laugh, "Then I said, 'Well, Jews go over the line.' "

David would cross the line again-this time in an episode of "Curb" featuring a showdown between a Holocaust survivor and a contestant on the reality show "Survivor" over which one had it rougher.

In 2011, between the last two large-scale Israel-Hamas conflicts, David gave us a "Curb" episode titled "Palestinian Chicken." A lesser artist would have settled for interethnic feuding between supporters of the Jewish deli and the new Palestinian chicken place, but David also delivered a biting take on the often tedious sniping between Jewish universalists (Larry, who has a yen for the chicken and lusts after the Palestinian owner of the restaurant) and tribalists (a yarmulke-clad Marty Funkhauser disgusted by Larry's betrayal).

Jewish clergy haven't fared too well in David's creative hands (then again, few people do). The rabbis on "Seinfeld" and "Curb" are always flawed, either incapable of keeping a secret or self-absorbed. And then there's the shaky-handed mohel from "The Bris" episode of "Seinfeld."

On "The Seder" episode of "Curb," Larry takes "Let all who are hungry come and eat" to a new level-inviting a registered sex offender at the last second.

"Curb" ended its fifth season with a multi-episode arc featuring Larry being told he was adopted and tracking down his supposed birth family-a collection of decidedly un-neurotic and extremely kind religious Christians. In short, the exact opposite of Larry. The result is a new, gentile, gentler Larry. Until he discovers it was all a mistake, at which point he returns to his old self (following a brief trip to heaven). Implication: The Jews and the Jewish are responsible for all of Larry's loathsome characteristics.

It's hard to think of a more decidedly anti-Jewish message on television.

Not that there's anything wrong with that-as long as it's funny.

Larry David must be STUBBORN. He wont look at THIS for another season (Season 9 !) of Curb Your Enthusiasm: http://www.amazon.com/The-LOST-EPISODES-Enthusiasm-Shoulda/dp/1491081627 -It's ALL mapped out for them --10 Episodes (plus option for another 10) --READY to GO...and we offered it FREE. So sad.