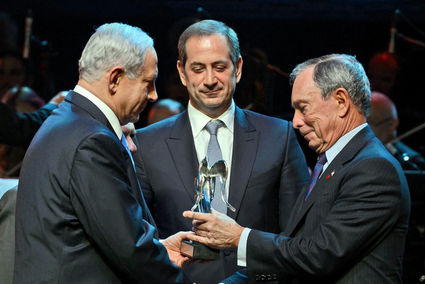 (JTA)-It is now open season for those who would like a chunk of Mayor Michael Bloomberg's change and think they have a big idea up their sleeves.

On Tuesday, the Genesis Prize Foundation announced the launch of the Genesis Generation Challenge, a competition offering 10 awards of $100,000 each to teams that can successfully present innovative projects "guided by Jewish values to address the world's pressing issues," according to a foundation statement. Teams must have approximately 10 people and be led by someone aged 20 to 36.

The money for the prize, which originally was announced in May, had been awarded to Bloomberg as the inaugural Genesis Prize recipient. Bloomberg, a billionaire and the former mayor of New York, promptly regifted the money to Genesis. He set on the competition model after first pledging the money to encourage Israeli-Palestinian trade, changing his mind at the urging of the Genesis Prize Foundation.

The Genesis Generation Challenge is the latest in a series of prizes aimed at coaxing a "big Jewish idea" in some form or another.

In 2007, philanthropist Charles Bronfman launched a competition for an innovative Jewish idea, with the reward of a book deal and a two-year appointment as the Charles R. Bronfman Visiting Chair in Jewish Communal Innovation at Brandeis University, with a six-figure salary. The first winner, to great fanfare, was Yehuda Kurtzer for "The Sacred Task of Rebuilding Jewish Memory." The academic position has since lapsed due to lack of funds.

In 2011, the Jewish Federation of Los Angeles started a competition to select the Next Big Jewish Idea, awarding the $100,000 prize to Batsheva Frankel for the LaunchBox, a toolkit designed to provide materials to encourage Jewish practice and exploration. Frankel currently is attempting to raise funds for a second iteration of the LaunchBox via crowdsourcing.

Jonathan Sarna, a professor of American Jewish history at Brandeis University and the chair of the selection committee for the Bronfman "big idea" competition, said the recent focus on major transformative ideas in the Jewish world was elicited by the success of Birthright Israel-what he called "Birthright envy." Sarna also argued that the focus on innovative breakthroughs was spurred by the modern culture of rapid technological change.

"People got used to the idea that there are big things-a cellphone, the iPhone-that would truly change our world," said Sarna. "I do think there is a sense that the world is changing faster than it used to change. It may not be true, but that's the view."

"Bloomberg saw the benefit of reaching into the target population to come up with target answers," Firestone told JTA.

The Genesis competition also will focus on encouraging collaboration and communication among the competing teams, and on offering mentorship, support and expertise to teams as they develop their proposals.

The Genesis Prize, which will be given out annually, is awarded to an accomplished, internationally renowned professional who is a role model in his or her community and can inspire the younger generation of Jews worldwide, according to the Genesis Prize Foundation website.

Although the prize was launched with the explicit purpose of inspiring young Jews, the Generation Challenge is open to applicants of all backgrounds, and teams are encouraged to address global problems. But Firestone was confident that the competition would nonetheless attract the interest of young Jews.

"When you go looking in the innovation space, you will find young Jews," said Firestone, noting that the competition's online portal already was attracting one of its strongest concentrations of visitors from Tel Aviv. "We think you're going to find lots of Jewish individuals, but not only by asking people 'are you Jewish?' "