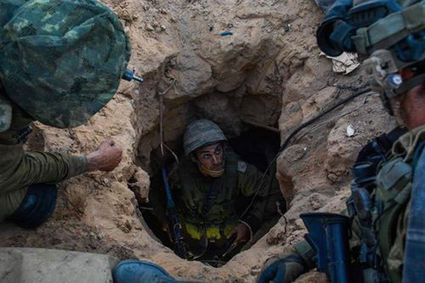 Israeli soldiers from the Givati Brigade seen at the entrance to a Hamas terror tunnel during Operation Protective Edge.

With the withdrawal of ground troops from Gaza, the Israel Defense Forces (IDF) said it completed its mission of dismantling a network of terrorist tunnels. But how did Hamas get its hands on materials to build the tunnels in the first place?

Lt. Col (ret.) Jonathan D. Halevi, an expert on the Middle East and radical Islam at the Jerusalem Center for Public Affairs (JCPA), explained that some of the materials, including cement and iron, were smuggled into Gaza by Hamas through other tunnels from Egypt. Yet due to pressure from international human rights organizations, until recently Israel itself was also providing Gaza with those materials. While the materials were earmarked for civilian construction projects, Halevi said that in reality, they were diverted by Hamas to create the network of attack tunnels.

"The pressure [on Israel to transfer building materials] was enormous and [was put on] by several [local] human rights organizations and international [ones], and was very effective in reaching out to the world's public opinion, including the EU (European Union) and the U.S. administration," Halevi told JNS.org. "And that, in a way, helped Hamas's efforts in building these tunnels."

Numerous times during the ground operation-which destroyed 32 cross-border tunnels, according to the IDF-terrorists succeeded in using the tunnels to sneak under the border, popping up on the Israeli side with the goal of carrying out mega-attacks against civilians who live in kibbutzim and other communities. A significant number of IDF troops were killed in the process of thwarting these attacks.

A recent report by The Jerusalem Post indicated that Israel's political and security echelon has come under criticism over the fact that little action was taken to address the tunnel threat following a 2007 state comptroller's report that revealed their potential danger. According to the comptroller's report, one such tunnel was used in the kidnapping of former IDF soldier Gilad Shalit, who was eventually freed by Hamas in exchange for more than 1,000 Palestinian prisoners.

JCPA's Halevi said Hamas has been digging hundreds of tunnels for operational purposes since the year 2000. He told JNS.org that human rights organizations who pressured Israel "overlooked or ignored Israeli warnings about the use of these materials to build Hamas's military infrastructure."

"So, in the name of humanitarian support for Gaza, Hamas misused the trust of the international community to build the infrastructure to attack Israel, with the help of human rights organizations," said Halevi.

Regarding Operation Protective Edge, Halevi said that while the IDF "has had many achievements in fighting these tunnels, the problem is that Hamas during the last few years invested a lot of resources in digging them for use as a strategic tool against Israel, or as a Hamas spokesman said this past March, 'We are not under siege anymore, we are imposing a siege on Israel.'"

Guy Inbar-a spokesman for Coordination of Government Activities in the Territories (COGAT), a branch of the Israeli Defense Ministry that facilitates humanitarian issues and infrastructure projects in Judea and Samaria and the Gaza Strip-told JNS.org that his unit had been charged with transferring building materials to the private sector in Gaza, but that those transfers were halted in October 2013 "after Israel discovered a terror tunnel from Gaza to Israel that was to be used to kidnap Israeli soldiers or civilians."

As a result, "a new mechanism was put in place with U.N. agencies to monitor the materials that go into Gaza, since we understood that some of the building material went to Hamas, and Hamas used it for building tunnels and even their [underground] headquarters," said Inbar.

While declining to divulge exactly what percentage of Israeli construction materials in fact ended up in the hands of Hama, Inbar said, "I would like to emphasize that after examining the amount of cement used for those tunnels, we know that each tunnel could have been used to produce at least a three-story hospital."

Inbar also would not comment on the amount of pressure being levied on Israel by NGOs to transfer cement and other materials into Gaza without restriction. But he said that there are "international organizations working in Gaza who know the exact problem, because of the Hamas terror organization's rule over the Gaza Strip."

Israel is still working with those international organizations to assist with civilian projects, including schools, hospitals, and medical clinics, according to Inbar. Even as they come under fire, he said, civilian workers from COGAT remain at the Israel-Gaza border crossings to transfer aid to the people of Gaza.

"I hope people will understand the problem we have with this terror organization, Hamas, which damages the quality of life of the population in Gaza," Inbar said.

One of the organizations pressuring Israel to ease restrictions on supplying building materials to Gaza-even during the latest conflict-is Gisha, an Israeli non-profit whose goal is to protect the freedom of movement for Palestinians, particularly the residents of Gaza.

Sari Bashi, Gisha's founder, told JNS.org that the Israeli restrictions have done significant damage to the economy in Gaza. Furthermore, she said her organization believes the restrictions have been ineffective in stopping the Hamas tunnels, claiming that the materials used in their construction were brought into Gaza from Egypt via the smuggling tunnels when prices were low-before the current regime in Cairo cracked down on such smuggling.

When asked how she can know with certainty whether the cement used by Hamas to build tunnels originated in Egypt or Israel, Bashi replied, "That is the wrong question." Then what does Bashi believe should be asked?

"Is it legitimate to prevent civilian goods from entering Gaza?" said Bashi, adding that the "damage to the humanitarian and economic needs [of the people in Gaza] far outweighs any security benefit."

Halevi said that while Israel might have stopped allowing cement into Gaza for the time being, America has still promised $47 million in aid to Gaza as a result of Operation Protective Edge.

"After each round of violence it's the EU, the Americans, Qatar, and other countries who rush to give support [to Gaza]," he said. "And this support, without any effective control of the funds, enables Hamas to rebuild its military capabilities."