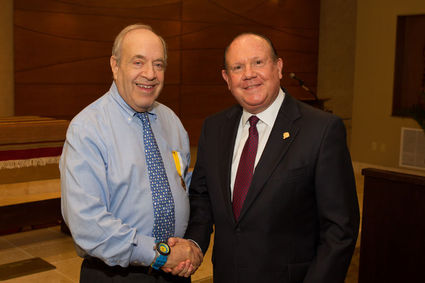 Alan Ginsburg with the chair emeritus of the Catholic Foundation of Central Florida, Allan Keen.

ORLANDO-Jewish philanthropist Alan Ginsburg was recently awarded the Benemerenti Medal, a papal honor bestowed by Pope Francis, for his vision in creating a space where Catholic and Jewish students can fulfill their spiritual needs, side by side, while attending the University of Central Florida. Ginsburg funded the construction of the Catholic Campus Ministry Center and adjacent Hillel Center, which opened last year.

Bishop John Noonan and Allan Keen, chairman emeritus of the Board of Directors for The Catholic Foundation of Central Florida, surprised Ginsburg with the medal and scroll from Pope Francis during a private luncheon, attended by about 75 family, friends and colleagues, on Tuesday, Aug. 26 at the Catholic Campus Ministry Center.

"Today we come together to thank Alan in a special way," Keen said. "Alan's vision affirms what history and our hearts have told us is true--faith has the power to unite. Faith in a world filled with destructive forces has the power to create, to build, and to deal with life's challenges."

Ginsburg, humble by nature, was overcome with emotion as he stepped forward to accept the honor. Wiping away tears, he said, "Thank you. This is really a surprise for me. There are a lot of people who should be standing here besides me. Bishop, thank you very much. Fr. Ben [Berinti], you have done a great job with this facility, and I am very proud to be a small part of it."

"Only 168 people on earth have been presented this prestigious award by a sitting pope and Alan Ginsburg's selection is not just a tribute to his own vision, but also his incredible dedication to community development here in Central Florida" commented Aaron Weil, executive director and CEO of Central Florida Hillel, who attended the luncheon. "Alan's vision for Northview is increasingly gaining national attention and this is bringing game changing opportunities to UCF, the Catholic community and of course the Orlando Jewish community."

A successful Maitland developer, Ginsburg recognizes his responsibility to return to God the gifts God has given him. His reputation for philanthropy is well known and he has donated millions of dollars for the benefit of Orlando schools, hospitals, Jewish causes and more.

With an estimated 13,500 Catholic students on the UCF campus, and more than 6,000 Jewish students, Ginsburg said the new space was needed for students who want to go to a university that will offer them the opportunity to maintain their faith traditions.

"Hopefully this is one foundation that will provide a good basis for students going here to continue their faith, to feel that they are part of a greater group and greater good around the world," Ginsburg said.

The Benemerenti Medal was instituted by Pope Gregory XVI in 1832. It is conferred on individuals who are Catholic or non-Catholic and who demonstrate exceptional service to the Catholic Church, to society, and to the principles of love and fidelity. The Benemerenti medal is the highest honor any layperson can receive from the Holy See.

The medal was originally intended as a means to honor those who fought in service in the papal army. In 1926, Pope Pius XI began bestowing the Benemerenti medal upon civilians.

Earlier this year, Bishop Noonan wrote to Pope Francis, telling him of the generosity and love Ginsburg showed for the Church and its young people. In reply, Pope Francis said that he indeed was worthy of the Benemerenti medal for his service, for his love and for his humanity.

"One thing I want to say to you today, Mr. Ginsburg, you are truly appreciated and loved by the Catholic community for what you have done for us," Bishop Noonan said.

"Thank you for the award," Ginsburg said. "You all should be proud in your hearts of what we have accomplished here. I am so very proud to be a part of it and hope long beyond my time and all of our times that this building will prosper and the students who go here will prosper and we all would have done a good thing for the children of our faith and for humanity in general."