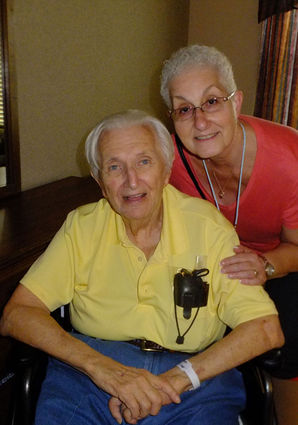 Marion Bromberg with a resident.

I read this recently in the World Jewish Congress Digest (WJC) and I found it to be very upsetting. (As I age, I seem to find everything upsetting... especially when I look in the mirror!)

As the Jewish New Year is almost upon us, I feel this takes on even more meaning. I pass it along to you:

"During a major national address for Persian New Year, Iran's Supreme leader, Ayatollah Ali Khamenei, took another opportunity to deny that the Holocaust ever took place and accused the West of restricting free expression by outlawing Holocaust denial.

'Expressing opinion about the Holocaust, or casting doubt on it, is one of the greatest sins in the West,' Khamenei said. 'They prevent this, arrest the doubters, try them while claiming to be a free country. They passionately defend their red lines. How do they expect us to overlook our red lines that are based on our revolutionary and religious beliefs?'"

"This speech comes on the heels of efforts by President Hassan Rouhani to repair Iran's image and separate himself from former Iranian President Mahmoud Ahmadinejhad.

'When countries are rushing to welcome back a supposedly more moderate Iran into the world community and to do business with it, they should remember it is not a new Iran but the same Iran with a new face.' according to Lauder. 'Ayatollah Khamenei's words are unmistakable: He denies the Holocaust happened. Iran needs to renounce Holocaust denial, extremism and bigotry if the world is to have any faith in its conduct and intentions. Until then, the West needs to be very careful in engaging with Tehran.'"

Changing to a more pleasant subject...

I recently received an email from NANCY LUDIN, executive director of the Jewish Pavilion, naming MARION BROMBERG, the Pavilion's Mensch of the Week. Here is the email:

"Judaismabout.com defines the Yiddish word mensch as 'a person of integrity.' A mensch is someone who is responsible, has a sense of right and wrong and is the sort of person other people look up to. Marion Bromberg fits this definition to a 'Tee.'

When Marion and Ed Bromberg moved to this community they became active and philanthropic from day one. They are generous supporters of every Jewish agency in town. You will never attend a gala without seeing them.

Hiddur P'nai Zakene, showing deference to the elderly is one of the major tenants of our faith and a major focus for the Jewish Pavilion. Marion Bromberg not only shows respect, but mixes it weekly with compassion. She has been visiting the residents at Health Center of Windermere once a week for five years. Many elders she visits are alone in the world and her visits truly brighten their days."

Speaking of a mensch...

It seems the Jewish Pavilion is "rich" with wonderful, selfless volunteers and here is another that deserves a "shout out." I pass this email from NANCY LUDIN on to you as well:

"The Urban Dictionary defines mensch as someone to admire and emulate, someone of noble character.

DEBBIE MEITIN is the epitome of this definition. She does so much for our entire community and especially our Jewish community.

Debbie has lead services for the Jewish Pavilion since its inception. She devotes one entire day of the month to the Pavilion and roams from one service to the next. She often conducts four or five services and goes the same evening to synagogue at Temple Israel and assists with services there. While the seniors and Jewish Pavilion staff and volunteers marvel at her Judaic knowledge and singing talents, it is her compassion and comradery that are most noteworthy.

Debbie has been a major leader with JNF and Temple Israel. She has supported and served on the boards of numerous Jewish organizations. Debbie is often asked to sing at the opening ceremonies for Jewish events. She has led a weekly Israeli dance class at the JCC "forever."

And speaking of "Shout-outs"...

She kept checking on us to make sure we had what we ordered... or could it be that she thought my spouse was handsome. (AHA!)

Another "shout-out" goes to RONALD WOODS, who works at the Publix Market #1285 in Casselberry, Florida.

Ronald is always so helpful and I always seem to need help. I love "bumping" into him in the aisles because he is always happy to locate products for me. (As I get older I forget where everything is!)

Recently, as most of you know, we lost comedian ROBIN WILLIAMS to suicide. Although not Jewish, he was very close with members of the Jewish community.

I sincerely hope none of my readers ever need it, but here is the phone number to call just in case: 1-800-273-8255.  It is the official phone number of the National Suicide Prevention Lifeline and the call is free and confidential.

Moishe and Sadie lived in a retirement home in Brooklyn and were celebrating their 50th anniversary. (Irv and I just celebrated our 54th).

Although their three sons (we have three sons also!) have successful careers, they have been visiting their parents less and less in recent times. Nevertheless, the sons agreed to visit their parents for a special Sunday lunch in honor of the occasion. As usual, they each arrived late. And their excuses began:

"Happy Anniversary, mom and dad, I'm sorry I'm late," said the first son to arrive, "but I had an emergency at the hospital. I didn't have time to get you both a present." 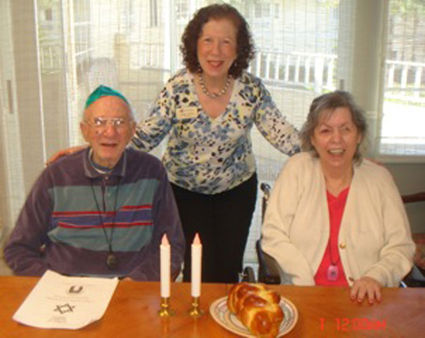 "Don't worry," said Moishe. "The main thing is that we will be together, right?"

"Don't worry, sons. We are all together," said Moishe again.

"There is something mom and I want to tell you, though, and it might as well be now," he continued. "We have been together for half a century but we never bothered to get married."

"Does that mean we are bastards?" asked the eldest son.

"Yes, that's exactly what it means... and cheap ones too!"