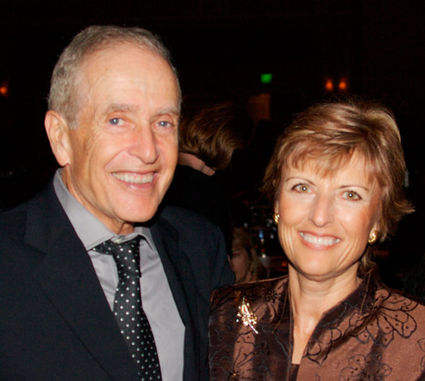 Jewish National Fund (JNF) will host its annual Tree of Life Award Dinner at the Rosen Plaza Hotel, located at 9700 International Drive in Orlando, at 6 p.m., on Tuesday, Nov. 18. The event will honor local philanthropists Valeria and Jim Shapiro and Orlando Magic Executive Alex Martins with the prestigious Tree of Life Award.

The Tree of Life Award is a humanitarian award given in recognition of outstanding community involvement, dedication to the cause of American –Israeli friendship, and devotion to peace and security of human life.

Jim, a Maine native and avid Boston sports fan to this day, has had a diversified career, first working overseas for large corporations and then becoming a successful independent owner-operator of several car rental franchises and parking companies in Orlando and Tampa. For 20 years he was on the national board of the American Car Rental Association, serving in various capacities, and for 10 years he was president.

Valeria, a native of Milan, Italy, has lived in various countries, eventually settling in Florida where she raised a family, volunteered in schools and educational organizations and worked in tour sales and marketing.

Valeria and Jim are both dedicated to giving back to Orlando-their adopted home. Jim has been an active member of the Holocaust Resource and Education Center board for the last 20 years and served the last four as president. Valeria is involved in women's philanthropy through 100 Women Strong and serves on the board of the Orlando Shakespeare Theater. They are also active supporters of the Orlando Health Cancer Center.

In 2006 they joined a JNF mission to Israel that turned out to be a life-altering and most meaningful experience. They have been involved with the local JNF board since their return- Valeria has served as President and they led a mission to Israel in 2010.

Jim and Valeria, who celebrated their 20th anniversary this year, share a love of travel, evident in both their life stories and in where they met-the baggage claim at Orlando International Airport.

"Valeria and Jim have made special contributions to the Orlando Jewish community, Israel and to JNF, said Deborah Meitin, JNF Orlando Board president. "Through Jim's leadership at the Holocaust Center and Valerie's leadership role and dedication to JNF here in Central Florida, they have made a difference for so many and are deserving of this award."

Tess Wise, founder of the Holocaust Memorial Resource and Education Center (HMREC) of Central Florida, will also be honored at the dinner with JNF's Guardian of Israel Award. JNF Chief Executive Officer Russell F. Robinson will be the keynote speaker for the event.

Sponsorship information and tickets are available online at jnf.org/orlandotol. For more information, please contact Laura Abramson at labramson@jnf.org or 407.804.5568.