A Jewish Outreach INitiative that looks beyond labels 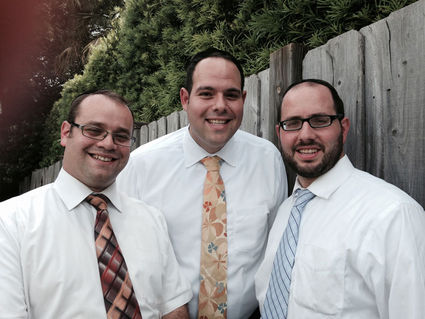 In the Heritage Florida Jewish News' Rosh Hashanah issue, the Jewish Federation of Greater Orlando ran an ad with pictures of various jars labeled different types of Jews: Orthodox, Federation, Reform, Conservative, etc. Below the picture was the phrase: "Now more than ever, it's time to look beyond our labels." The point being made is that Jewish unity is what is important. A unified Jewish community is a strong community.

During a meeting with Heritage publisher Jeff Gaeser, Gabi Gittleson explained his view of what community is and its importance. "Community is a concept that is the backbone and bedrock of every town, every city, every metropolis. It lies at the core of every tragedy and triumph experienced by a group of neighbors and friends.

"But when one is Jewish," he continued, "the word takes on a whole new meaning-a tradition, a purpose, a way of life. A Jewish community is a place where kindness abounds, where guests are plentiful, where peaceful neighborly relations are vitally important. A Jewish community makes meals for their neighbors during difficult and happy times, gives charity willingly to those less fortunate, and ensures the well being and comfort of those we love. A Jewish community is a place where our privileged heritage is highlighted and treasured, where our customs are appreciated and celebrated, where our past becomes our present and our present becomes our future."

Gittleson, Kramer and Rennert believe that the Orlando Jewish community embodies these ideals, and thrives by keeping Jewish identity ingrained in daily life. So when these three young families from New York were looking for an ideal location to settle with their growing families, upon hearing of Orlando's superlatives from mutual friends living in the area, it became an obvious choice. But these three families wanted to do more than just reap the benefits of living in such a community; they wanted to devote their energies and skills to the furtherance of a Jewish Orlando, they wanted to become meaningful and impactful contributors.

In fact, J.O.IN. Orlando has already made an impact in the community. J.O.IN. Orlando co-sponsored and organized a Jewish Family Fun Day the first week in September, bringing together over 200 Jews from the greater Orlando area (see Heritage's Sept. 19, Rosh Hashanah issue). They have held study sessions with individuals and groups throughout the community, shared Shabbat meals, and given food assistance.

The mission of J.O.IN. Orlando is straightforward-"To strengthen and support the Orlando Jewish community, by helping all individuals, regardless of background or affiliation, to develop a deeper relationship with their privileged heritage through Torah and socio-religious events."

Also of importance to Gittleson, Kramer and Rennert is making connections, developing interpersonal relationships and to raise Jewish pride and identity. This can be accomplished through home study groups or simply having a chat at Starbucks.

The Heritage would be remiss if this article did not mention that Gittleson, Kramer and Rennert are Orthodox rabbis. However, like the labeled jars, they drop the labels in order to fulfill their emphasis on Jewish continuity in Orlando.

"We were nervous that if someone reads 'three Orthodox rabbis' are starting a Jewish organization, they will stay away if they think we are different than them," said Gittleson. "I really want to focus on the fact that we as individuals, and J.O.IN. as an organization, accept with love and warmth any and all individuals, regardless of background or affiliation."

Kramer also wanted to emphasized that they are not here to compete with any established synagogue or to proselytize anyone. "We are not looking to build a synagogue," he said. "The J.O.IN. staff is always available to talk about Judaism, to discuss life-cycle events-all at no cost to anyone."

J.O.IN. Orlando, temporarily located at 8975 Royal Birkdale Lane in Southwest Orlando, is presently searching for a permanent location to act as their base of operation. In the meantime, J.O.IN. Orlando has partnered with many national organizations to create programming for the entire Jewish family. "Many thrilling events will be arranged throughout the Jewish year, keep your calendar open," said Rennert.

One upcoming event is The Shabbat Project, a worldwide initiative for every Jew, from all walks of life, to come together and spend one Shabbat together. The event, to be held Oct. 23-25, will also consist of a community-wide Challah bake and Saturday night concert / Kumzitzs. More to come on this event in the next issue of The Heritage. However, to read more about The Shabbat Project, visit orlandojewishfed.org/communityeventcalendar/the-shabbos-project.

For more information about J.O.IN Orlando's various programs, or to set up a learning session, explore any area of Judaism or just to shmooze, call the J.O.IN. office at 407-569-8840.

I am so impressed with these young idealistic families. That is what the world needs - people who are actually willing to extend themselves for others. I wish them much success!