South Africa classmates reconnect like only they know how 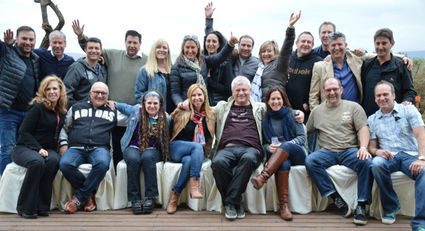 Warren Bank Members of Carmel College's Class of 1984 at the Tala Private Game Reserve near Durban, South Africa, enjoying their time back together, July 2014.

BALTIMORE (JTA) – Decades removed, at a private game reserve in South Africa, the unique bond felt by the Class of 1984 at Durban's Carmel College had endured.

Twenty-four graduates from the now defunct Jewish high school had gathered for a reunion of the class precipitated by its 30th anniversary.

"The relationships between us were very much like brother and sister," Warren Bank, an advocate in Johannesburg who conceived of the reunion, said of the class.

For three days this summer, the classmates enjoyed the type of camaraderie that they said surpassed any close group that transports itself decades back.

They cited their hometown's small and dwindling Jewish community, Carmel's powerful Jewish-Zionist orientation that bound students to Israel and world Jewry, and the intense pull of what Bank termed the "Durban Diaspora."

Or, as Judith Dubin put it, "the South African experience" of Jewish dispersion and large-scale emigration prompted by her homeland's upheavals preceding and following the fall of apartheid.

"So many of us fanned out after college," said Dubin, a television producer who lives in New York City and attended the reunion. "You look for those anchors to reinforce who you are and where you came from."

Carmel's deep influence on its alumni keeps the institution very much alive in graduates' hearts.

Some of the 52 Carmel graduates settled elsewhere in South Africa, principally in Johannesburg and Cape Town. The others left for Australia, Canada, England, Israel and the United States. But with so many of their parents remaining in Durban, graduates often visit.

Wherever Carmel alumni travel, in fact, they like to rustle up a few classmates to reconnect.

For the first unofficial reunion, the classmates came together for a welcoming kiddush following Friday night services at the Durban United Hebrew Congregation, known as the Great Synagogue. There was a Sabbath dinner at the nearby home of a classmate, Kevin Baitz.

And on a Sunday morning they visited their old school – Carmel closed about a decade ago, its building now housing another school. The current principal hosted a formal tea.

But the centerpiece would be Saturday's overnight stay at a lodge in the Tala Private Game Reserve – no spouses and children allowed. The carved-out space and time were reserved for the graduates alone to recollect their youth and delve into their adult lives.

"The kinship is something quite special, and you don't ever have that with someone you meet subsequently," Bank said. "You have that shared experience."

Some who didn't make it back to South Africa could still join in the festivities. At the Friday night dinner and at the Tala lodge, where attendees schmoozed deep into the night around the fireplace (this being winter in the Southern Hemisphere), far-flung classmates spoke to their old friends via Skype.

At one point, nine graduates from abroad were participating electronically.

From San Diego, Calif., Anton Monk said he could see the "ear-to-ear grins" of his ex-classmates.

"It was like we never left South Africa," added Monk, who moved to Southern California as a teenager.

From Israel, Stanley Behrman later emailed his classmates apologizing for having talked too much during the two Skype feeds.

"But it was clearly way beyond my control," he wrote. "As each person hooked up to the call, my emotions went on tilt. I didn't know if I wanted to laugh or cry, but I did want to reach out and give each person a huge, long hug. I felt like we could have chatted for another 10 hours, and it still would not have been nearly enough."

Dubin said the reunion's experience "reinforced for all of us the need to keep doing this." She hopes another reunion will be held within five years.

Monk said the wide dispersal of the class actually might be preserving the ties. Had the majority settled in Johannesburg, for example, "I'm not sure [the reunion] would have had the same meaning," he said.

The Carmel classmates are endowing their hometown with additional meaning, launching a fund to benefit Beth Shalom, a Jewish senior citizens' home in Durban.

The institution provides "a safe haven for the elderly from our community – many of whom are our relatives or friends," Kim Lombard wrote in an email to her classmates.

"Our success has much to do with the community in which we were all raised and I believe has contributed to the strength of the bonds we formed and continue to derive much joy from."