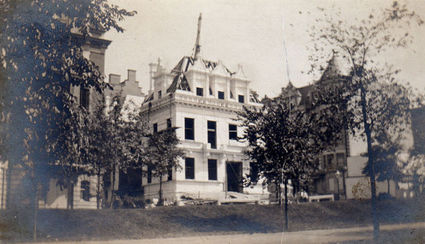 The Schinasi Mansion on Manhattan's Upper West Side, 1907.

And then there was Altina Schinasi, the subject of a new documentary feature, "Altina," directed by her filmmaker grandson Peter Sanders.

"Tina" grew up among the opulent splendor of a New York mansion, became a painter and innovative sculptor, then an Oscar-nominated film producer, inventor, business executive, backer of the Rev. Martin Luther King Jr. and an advocate for refugees fleeing the Nazis.

The new feature on her life has been shown this month in New York City and Beverly Hills, Calif.; future screenings are planned for Washington, D.C.

Altina Schinasi-Sanders-Barrett-Carey-Miranda was born in 1907 and raised in a 12-bedroom white marble mansion that's still standing on Manhattan's Upper West Side, at Riverside Drive and 107th Street.

Her father, Morris Schinasi, arrived in New York as a penniless Jewish immigrant from Turkey. He invented a cigarette-rolling machine at a time when people still rolled their own, then branched out into making and selling his own brands of cigarettes packed with strong Oriental tobacco. Morris Schinasi managed to build a business empire without learning how to read or write-but he spoke eight languages fluently.

Tina Schinasi attended a predominantly Episcopalian boarding school in Wellesley, Mass., where she got her first youthful taste of anti-Semitism.

Despite her family wealth, she went to work during the Depression, designing window displays for Fifth Avenue stores. Schinasi also collaborated with the surrealist painter Salvador Dali on some assignments and studied under the German exile artist George Grosz.

She found the spectacles worn by women in the early part of the 20th century to be unflattering, so she created Harlequin-or cat's eye-frames, which swept the country in the 1930s. Subsequently, Schinasi established her own company to distribute her invention.

Striking out as an artist, she experimented with bold paintings, showing the influence of Picasso and Chagall. Then, turning to sculpture, she created "humanistic" benches and chairs that she dubbed "chairacters," depicting lovers in passionate embrace or coolly turning their backs on each other.

"I never thought I was a great painter, but I had a passion for the arts," she says in the film.

In the 1940s, she moved to Los Angeles and naturally directed her talents toward making a documentary film. Titled "Interregnum" ("Germany Between Wars"), it tracked the artistic and political career of her ex-teacher Grosz, whose biting anti-Nazi caricatures led to his forced exile when Hitler came to power.

This first-time effort won her an Oscar nomination and the prestigious Golden Lion at the Venice Film Festival.

During the civil rights confrontations of the 1950s and '60s, she befriended King and obtained his agreement to make a film about his life and struggles. The project was too controversial at the time and Schinasi was unable to find studio funding and backing, Sanders said.

During the communist-hunting era of the 1940s and '50s, Sanders noted, Schinasi sheltered movie director John Berry, who was trying to avoid a congressional subpoena, in her Beverly Hills home.

Alongside these varied activities she married a procession of husbands. In chronological order they were architect Morris Sanders; Eric Barrett, a Viennese doctor and concert pianist; Charles Carey, her co-producer on "Interregnum"; and finally, Celestino ("Tino") Miranda, an artistic refugee from Castro's Cuba who joined Tina in her painting and sculpturing studio.

Miranda makes for one of the more arresting figures in the film. He married the considerably older Tina in 1981, when she was already in her 70s. Speaking in Spanish, he tells the viewer, "She was hot, she liked sex. She didn't just lie there, she had the stamina of a 25-year-old."

Schinasi died in 1999 at age 92. In making his documentary, Sanders was greatly aided by the discovery of footage that Morris Sanders shot on the couple's honeymoon in 1927 and in 1928. A two-hour interview filmed with an 84-year-old Schinasi filmed by her son Terry Sanders also was instrumental.

During the last decade of her life, Schinasi and Miranda lived in Santa Fe, N.M., and Peter Sanders joined them for half a year at their combination homestead and artists' studio.

He remembered his grandmother as cool and private, not the hugging type.

"I tried to decode what her paintings and sculptures meant," Peter Sanders told JTA. "And everywhere there were animals, inside and outside, peacocks, sheep, Chinese roosters and Bernese Mountain Dogs." 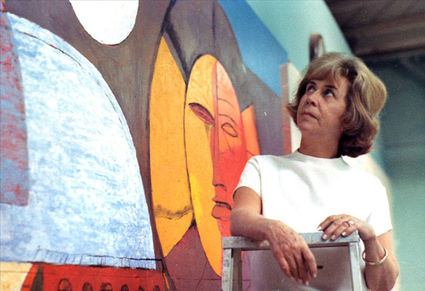 Asked about the Jewish aspect of his family tree, Sanders observed, "My grandmother Tina was proud of her Jewishness, deeply affected by the rise of the Nazis and personally furnished 13 affidavits to enable Jewish refugees to enter the United States. But we were never practicing Jews in the religious sense."

An upbeat aspect of the film is the musical score, including ragtime and jazz, reflecting the various decades of Tina's life. Following five years of work, "Altina" came in at a budget of about $250,000, mainly underwritten by Schinasi's granddaughter Victoria Sanders, who first conceptualized the film, and executive producer Diane Dickensheid.

To borrow from satirist and songwriter Tom Lehrer's paean to the much and famously married Alma Mahler, "a woman like this makes one realize how little one has accomplished in one's own life."