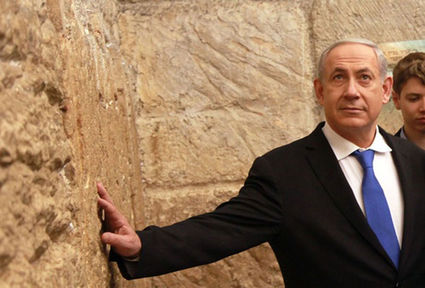 In his office, next to photos of his wife and family, Israeli Prime Minister Benjamin Netanyahu keeps a portrait of Theodor Herzl.

In an interview with Israel Hayom ahead of Rosh Hashanah, Netanyahu applies those past leaders' experiences to the present day. "The main quality a statesman should possess is foresight and subsequently the ability to properly navigate an ever-changing reality," he says.

As the Hebrew calendar turns to the year 5775, the prime minister shares his perspective and strategy, and analyzes the changing realities in the Middle East.

Israel Hayom: Is Israel doing better or worse than it was doing on the eve of Rosh Hashanah last year?

Benjamin Netanyahu: "We are doing better while facing a harsher reality. The reality around us is that radical Islam is marching forward on all fronts. This reality poses a challenge for us, as well as for the rest of the world. One of my duties as prime minister is making sure the world understands that our war against these Islamic organizations and states, as well as against the Islamic Republic of Iran, is their war as well.

"We are actually doing better now because on one of those fronts, Hamas, has received a debilitating blow, the likes of which it hasn't received since it seized control of the Gaza Strip. We targeted each of Hamas's capabilities and we set it back years-its rocket stockpiles, by killing 1,000 terrorists, destroying terror tunnels, demolishing terror towers, and crippling infrastructures Hamas spent years building.

"I believe we achieved the operation's objective, meaning achieving lasting peace and quiet by re-establishing deterrence via dealing [Hamas] a massive blow. What happens if they try again? They will be dealt a doubly debilitating blow-and they know it."

"The answer to that question is very complex and it entails a variety of considerations. One of those considerations is a spatial consideration, which cannot be ignored. We have Hamas in the south, al-Qaida and the Nusra Front in the Golan Heights, Hezbollah in Lebanon, and Islamic State in the east; and above all we have Iran, which has abandoned neither its support of some of these terrorist groups, nor its plans to acquire nuclear weapons.

"I have decided that the best way to tackle these problems is to seriously undermine Hamas in Gaza, but refrain from getting dragged in there. Otherwise, we would have found ourselves fighting not a 50-day war, but a 500-day one, and the heavy toll would have included more than human lives, but other areas as well. We would have had to face the question of what to do with the seized territory; there would have been an international price to pay-and all of that wouldn't have yielded a much better result.

"I think the difference between a good commander and a bad commander, is that a good commander knows how to achieve the declared goals for a lesser price. We would have ended up with the same result, only with a much heavier price, and I don't want to elaborate further."

How influential was the IDF in preventing a wider ground operation in Gaza?

"Nothing was prevented. We used combined judgment-mine, the defense minister's, and the chief of staff's, and eventually that of the cabinet members. I won't comment on cabinet meetings, but I can say that within the cabinet there was, most of the time and when it came time to decide, unanimity about the nature of operations.

"[Operation Protective Edge] was executed according to an outline and objectives I had set. The first order of business was targeting the terror tunnels in the south. That was a massive aerial strike. Then came preparing international public opinion, via conversations I had with prominent leaders... I made it clear to them that unless a cease-fire was struck, we would have to launch a ground operation against the tunnels, something that was not acceptable at the time.

"When we had completed uncovering the tunnels, I made the decision to pull the military out of [enemy] fire range, because I thought it was pointless to leave the soldiers there, and that the right thing to do was to resume the aerial strikes. The thing that guided me, and proved right, was that at the end of the day, the [aerial] campaign would trump [Hamas's] attrition, because our firepower is greater than theirs. That's also what happened-they agreed to our demand for a cease-fire."

With the negotiations resuming in Cairo, both Israel and Hamas have their demands. What is your "red line"?

"The goal is to make it clear that we are focused solely on two issues: ensuring our security interests, as well as the ability to send humanitarian aid and supplies that would assist in rebuilding the ruins, in favor of Gaza's population. Naturally, we have demands of our own, and we have the necessary tenacity to reject any demands the other side might make that we find unacceptable. We have been doing so successfully."

What should Israel do next about the broader threat of radical Islam?

"Fight it every way possible, and simultaneously explain the 'ideological' aspect. We don't necessarily have to say that [Iran and Islamic State] are operating from the same command center, but rather that they have a common ideology: 'Who will be the next caliph? Who will rule a world dominated by radical Islam?'

"Such a world has no room for Jews, seculars, homosexuals or minorities, and we know where they believe women belong. This is a serious threat because they are sending their tentacles all over the world-the United States, Europe, Australia, Russia, China, and Africa-this is a global threat.

"I believe that my role as the prime minister of Israel is to make it clear that the threat we face is one the entire world faces. We understand that, but many worldwide don't understand this threat."

There are those within the Likud party who say that "leadership cannot grow in your shadow," which is why some have chosen to leave the party. What is your response?

"So that's what they say. I can tell you that the public is saying otherwise, as is the impression among Likud members. Party members are very enthused, very supportive. And you know what? Today, after Operation Protective Edge, I have the support and appreciation of those who didn't vote for me. That's the truth I have encountered.

"I compare the support today to that of a year ago, be it from the public or within the Likud, and I'm stronger than ever both within my party and among the general public."

Does this mean you will be seeking another term in office?

"No. I think the relationship between Israel and the United States is based on solid foundations, and at the end of the day, large parts of the American public feel a deep affiliation with Israel. The difference is like night and day compared to the situation in Western Europe. That stems from historical, political, cultural and many other reasons.

"There is a deep bond between Israel and the U.S. and every administration subscribes to that. It is a deep connection. Only recently the Senate passed a resolution declaring Israel a major strategic partner, and Congress appropriated $235 million in [defense] aid [to Israel]. These are the markings of a very deep bond."

What is your plan regarding Israel's standing in the Middle East?

"We're talking about cementing and advancing Israel's power. The changes leading Arab nations have undergone have led them to view Israel not as their traditional enemy, but as a partner against three radical Islamist threats: the Muslim Brotherhood and Hamas, al-Qaeda and its offshoots, the likes of Islamic State and the Nusra Front, and the radical Shiites, who are sponsored by Iran and its proxy, Hezbollah.

"Can this realization translate into a more open relationship that further promotes a responsible, sober and safe diplomatic process? Only time will tell. It's worth exploring."

Are you saying that a new alliance has been formed between Saudi Arabia, Egypt, and Israel?

"That's taking things a bit far. But a word to the wise: you saw exactly how various [Arab] nations reacted [favorably] when we mounted a forceful response against Hamas and Islamic Jihad."

What is your message to the Israeli public for the new year?

"We have weathered a challenging year... We've been able to stop the infiltrators' phenomenon from Sinai-rivers of illegal migrants were about to flood the county. That problem has been solved, and we are removing those who have entered Israel illegally. This year alone 6,000 infiltrators were removed. This problem, which preoccupied all of us just a year ago, no longer resonates as loudly.

"We have also developed our economy and withstood regional upheavals, the likes of which this region has not seen since the fall of the Ottoman Empire.

"I was glad to see the resilience, strength, and bravery our people have demonstrated. Our younger generation, IDF soldiers, they have proven themselves as a wonderful generation, a heroic generation.

"I wish all of us a happy new year. A safe year. I will do everything in my power to make it a quiet year as well."

This interview was originally published by Israel Hayom, whose English-language content is exclusively distributed by JNS.org.