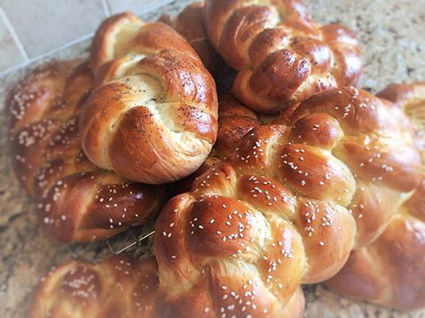 Jewish women from all over Orlando are expected to join the Mega Challah Bake on Thursday, Oct. 23, jointly hosted by all Chabad Jewish Centers in Orlando.

The 'Mega Challah Bake' event has been held in major cities around the world in the past few months drawing thousands of women together.

"This type of event empowers women in the sense that we can feel that we are part of something much bigger, united with Jewish women in our city and Jewish women throughout the world" said Chanshy Majesky co-director of Chabad of North Orlando. "It's a beautiful show of unity for all sections of the Jewish community to come together, drawing women from all affiliations," she said.

"The event is women-only because challah is specifically a "mitzvah" (a commandment or good deed performed out of religious duty) for women" said Devorah Leah Dubov, co-director of Chabad of Greater Orlando, "When a woman prepares challah" she added "all channels are open for her to ask for the blessings she needs in her life and in others' lives."

Traditionally, during the time of the temple, Jewish women used to prepare challah according to specific requirements and then break off a piece of the dough to give to the priests. That action symbolized that "we recognize that everything we have comes from God," said Chani Konikov co-director of Chabad of South Orlando. "And bread itself is important in Jewish tradition because it represents everything we have."

Since the temple's destruction, there haven't been priests to whom the dough may be given. But Jewish women continue to make challah, removing a piece of the dough and making a special blessing as they do. Today in the absence of the temple the small piece of dough is burned.

Rivky Lipskier, co-director of Chabad at UCF said she has held challah-making demonstrations in the past, but "doing this as a large, citywide event is extra-special. There is so much power when so many women are doing this together."

"The ballroom will be set elegantly with round tables, with premeasured ingredients at each place" explained Bracha Liebowitz, program director at Chabad of Greater Orlando. "Each woman will mix her own dough and leave it to rise. While the dough rises, women will enjoy soup and salads. At this time they will be able to browse the beautiful displays highlighting all of the mitzvot for women. When they return, they'll be able to shape two Challahs each"

The loaves will be taken home for baking.

"We have just entered a new Jewish New Year," said Dubov. "So this is an especially appropriate time to hold this event starting off the new year beseeching blessings for family members and friends"